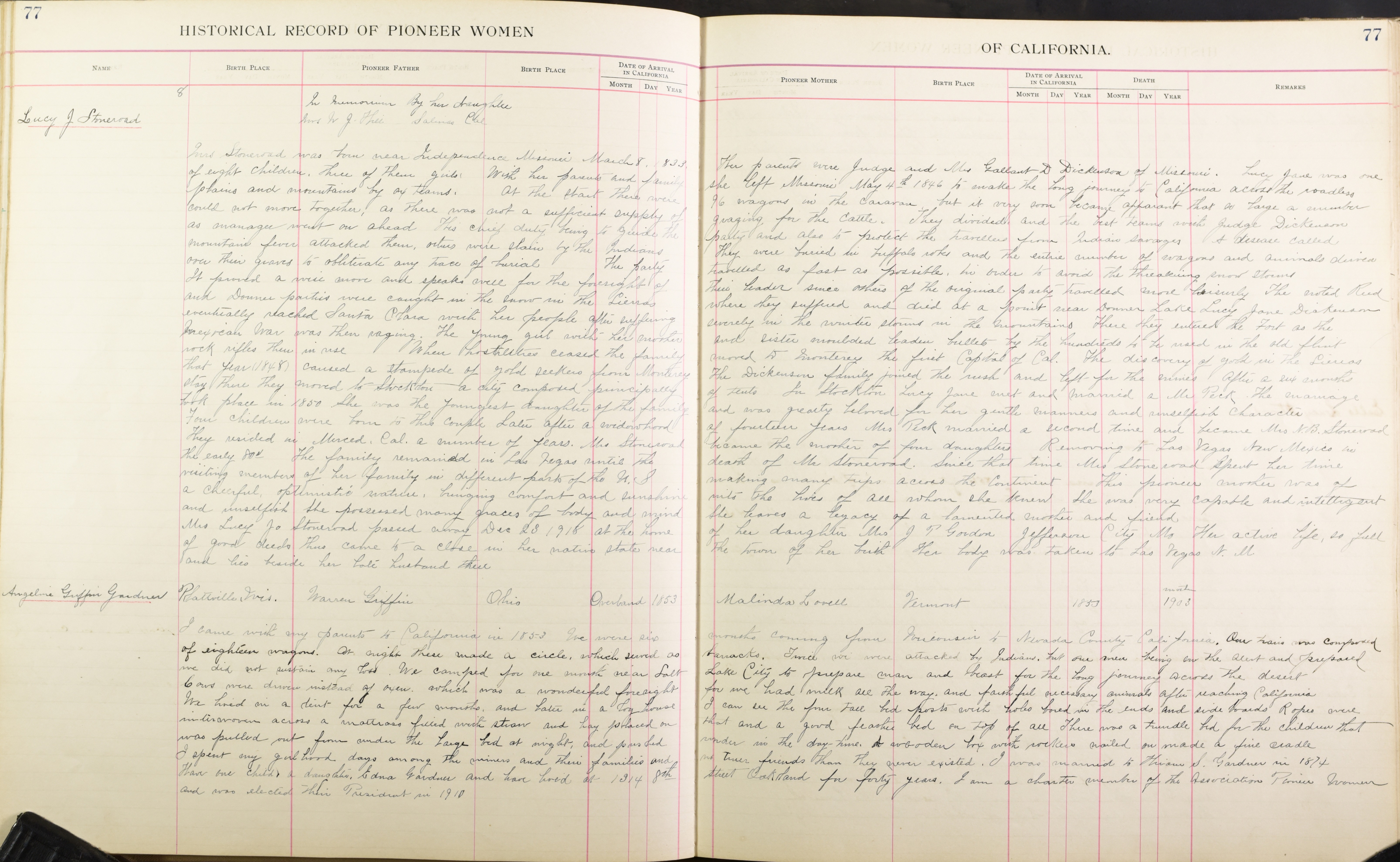 Mrs. Stoneroad was born near Independence Missouri March 8, 1832. Her Parents were Judge and Mrs. Gallant D. Dickenson of Missouri. Lucy Jane was one of eight children. Three of them girls. With her parents and family she left Missouri, May 4th 1849 to make the long journey to California across the roadless plains and mountains by ox teams. At the start there 96 wagons in the caravan, but it very soon became apparent that so large a number could not move together, as there was not a sufficient supply of grazing for the cattle. They divided and the best teams with Judge Dickenson as manager went on ahead. His chief duty being to guide the party and also to protect the travellers [illegible] from Indians savages. A disease called mountain fever attacked them, others were slain by the Indians. They were buried in buffalo robes and the entire number of wagons and animals driven over their graves to obliterate any trace of burial.  The party travelled as fast as possible, in order to avoid the threatening snow storms. It proved a wise move and speaks well for the foresight of their leader since others of the original party travelled more leisurely.  The noted Reed and Donner parties were caught in the snow in The Sierras where they suffered and died at a point near Donner Lake. Lucy Jane Dickenson eventually reached Santa Clara with her people after suffering severely in the winter storms in the mountains. There they entered the Fort as the Mexican War was then raging. The young girl with her mother and sister moulded leaden bullets by the hundreds to be used in the old flint rock rifles then in use.  When hostilities ceased the family moved to Monterey the first Capital of Cal. The discovery of gold in The Sierras that year (1848) caused a stampede of gold seekers from Monterey. The Dickenson family joined the rush and left for the mines.  After a six months stay there they moved to Stockton a city composed principally of tents.  In Stockton Lucy Jane met and married a Mr. Peck.  The marriage took place in 1850.  She was the youngest daughter of the family and was greatly beloved for her gentle manners and unselfish character. Four children were born to the couple. Later after a widowhood of fourteen years Mrs. Peck married a second time and became Mrs. N.B. Stoneroad. They resided in Merced, Cal. a number of years. Mrs. Stoneroad became the mother of four daughters.  Removing to Las Vegas New Mexico in the early 80s The family remained in Las Vegas until the death of Mr. Stoneroad. Since that time Mrs. Stoneroad spent her time visiting members of her family in different parts of the U.S. making many trips across the Continent. This pioneer mother was of a cheerful, optimistic nature, bringing comfort and sunshine into the lives of all whom she shew She was very capable and intelligent and unselfish. She possessed many graces of body and mind.  She leaves a legacy of a lamented mother and friend. Mrs. Lucy Jo Stoneroad passed away Dec 28, 1918 at the home of her daughter Mrs. J. T. Gordon Jefferson City, Mo. Her active life, so full of good deeds thus came to a close in her native state near the town of her birth. Her body was taken to Las Vegas N.M.and lies beside her late husband there.

Remarks: I came with my parents to California in 1853. We were six months coming from Wisconsin to Nevada County California. Our train was composed of eighteen wagons. At night these made a circle, which served as barracks.  Twice we were attacked by Indians, but our men being on the alert and prepared we did not sustain any loss. We camped for one month near Salt Lake City to prepare man and beast for the long journey across the desert. Cows were driven instead of oxen which was a wonderful foresight for we had milk all the way and faithful necessary animals after reaching California. We lived in a tent for a few months, and later in a log house. I can see the four tall bed posts with holes bored in the ends and side boards.  Ropes were interwoven across a mattrass [sic] filled with straw and hay placed on that and a good feather bed on top of all.  There was a trundle bed for the children that was pulled out from under the Large bed at night,  and pushed under in the day-time. A wooden box with wicker nailed on made a fine cradle. I spent my girlhood days among the miners and their families and no truer friends than they ever existed. I was married to Hiram S. Gardner in 1874. Have one child, a daughter, Edna Gardner and have lived at 1314 8th Street Oakland for forty years. I am a charter member of the Association Pioneer Women and was elected their President in 1910.