As preparations were being made for the commemoration of California’s Golden Jubilee (celebrating fifty years of statehood on September 9, 1900), a letter printed in a San Francisco newspaper asked why “no provisions had been made for the pioneer mothers” and, in turn, The Association of Pioneer Women of California was formed. Their mission was to collect and preserve the reminiscences of women arriving in California before January 1, 1854. 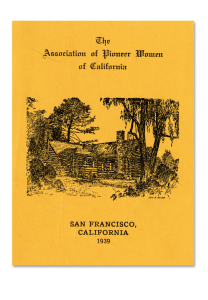 The founding members of The Association of Pioneer Women of California and their women descendants had a log cabin erected in San Francisco’s Golden Gate Park, where they hosted events honoring the contributions of pioneer women. Although the organization disbanded in 1970s, the log cabin remains popular with park visitors.

Of greater interest to historians, however, are the hundreds of first-person accounts, detailed descriptions, and engaging reminiscences that the organization collected from its members and compiled in a large book. These handwritten entries, all from the unique perspective of a pioneer woman or her daughter, create a more complete and balanced understanding of our shared history; previous records of this time were most often written by, and about, men. Recently donated to our research library by the estate of the organization’s last president, the ledger is being exhibited and published online for the first time.