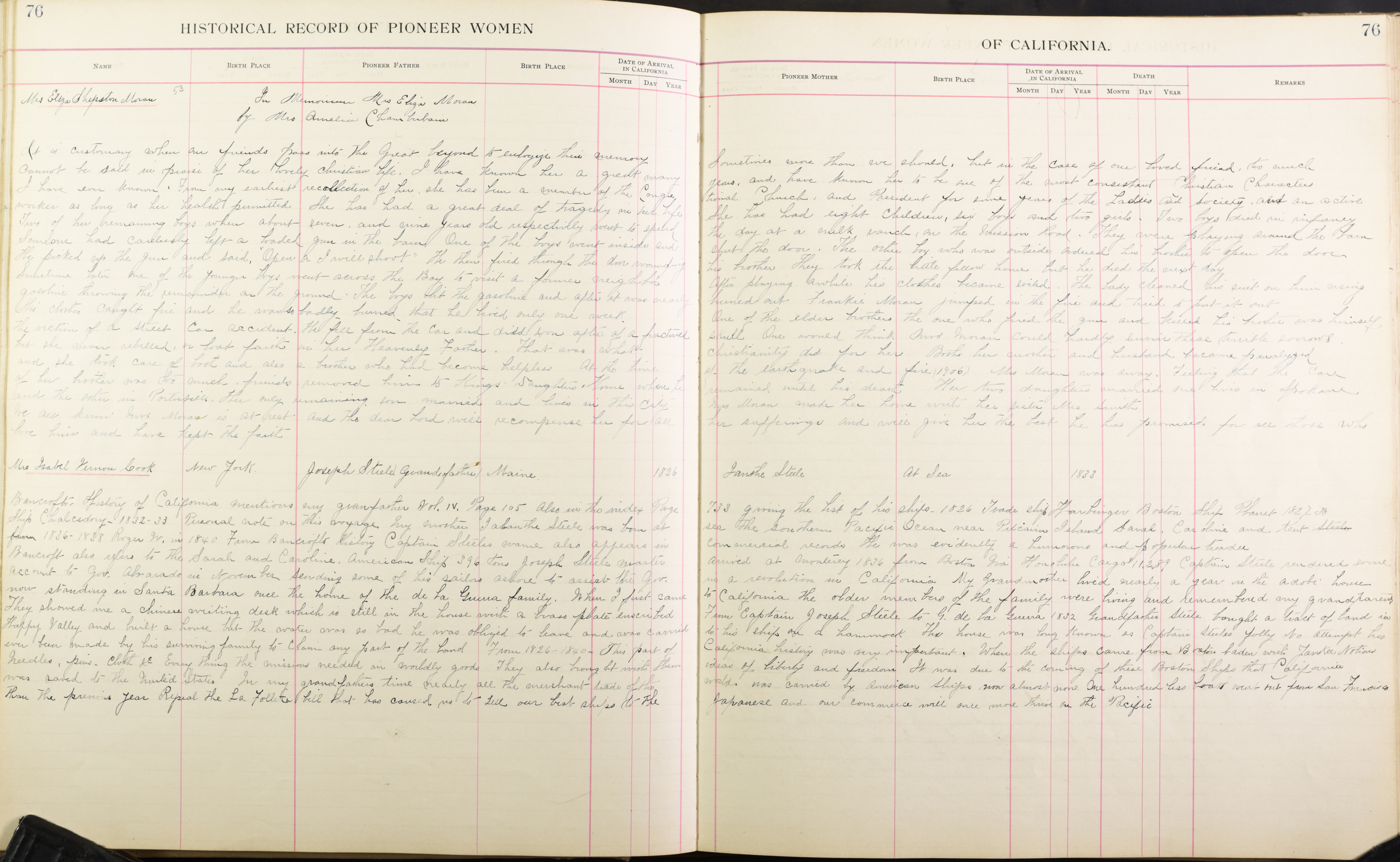 It is customary when our friends pass into The Great beyond to eulogize their memory. Sometimes more than we should, but in the case of our loved friend, too much cannot be said in praise of her lovely Christian life. I have known her a great many years, and have known her to be one of the most consistent Christian Characters I have ever known. From my earliest recollection of her, she has been a member of the Congregational Church, and President for some years of The Ladies Aid Society, and an active worker as long as her health permitted.  She has had a great deal of tragedy in her life. She has had eight children, six boys and two girls. Two boys died in infancy. Two of her remaining boys when about seven and nine years old respectively went to spend the day at a milk ranch, on The Mission Road. They were playing around the barn. Someone had carelessly left a loaded gun in the barn. One of the boys went inside and shot the door. The other boy who was outside ordered his brother to open the door.  He picked up the gun and said, “Open or I will shoot.”  He then fired through the door wounding his brother.  They took the little fellow home but he died the next day.  Sometime later one of the younger boys went across The Bay to visit a former neighbor.  After playing awhile his clothes became soiled.  The lady cleaned his suit on his using gasoline throwing the remainder on the ground. The boys lit the gasoline and after it was nearly burned out Frankie Moran jumped in the fire and tried to put it out. His clothes caught fire and he was so badly burned that he lived only one week.  One of the elder brothers the one who fired the gun and killed his brother was himself the victim of a Street Car accident. He fell from the car and died soon after of a fractured skull. One would think Mrs. Moran could hardly survive these terrible sorrows but she never rebelled, or lost faith in her Heavenly Father. That was what Christianity did for her  Both her mother and husband became paralyzed and she took care of both and also a brother who had become helpless. At the time of the earthquake and fire (1906) Mrs. Moran was away.  Feeling that the care of her brother was too much, friends removed him to Kings Daughters’ Home where he remained until his death.  Her two daughters married one lives in Spokane and the other in Porterville. Her only remaining son married and lives in This City.  Mrs. Moran made her home with her sister Mrs. Smith. We all know Mrs. Moran is at rest and the dear Lord will recompense her for all her sufferings and will give her the best he has promised for all those who love him and have kept the faith.

Remarks: Bancroft’s History of California mentions my grandfather, Vol. IV, Page 105. Also in the index Page 733 giving the list of his ships – 1826 Trade ship Harbinger Boston Ship Planet 1827 & Ship Chalcedony – 1832-33.  Personal note on this voyag.e My mother Ianthe Steele was born at sea. The southern Pacific Ocean near Pitcairn Island.  Sarah, Caroline and Kent Steele born 1836-38. Roger W. in 1840. From Bancrofts History  Captain Steeles name also appears in commercial records.  He was evidently a humorous and popular trader. Bancroft also refers to The Sarah and Caroline.  American Ship 396 tons Joseph Steele master arrived at Monterey 1836 from Boston Via Honolulu Cargo $11,289.  Captain Steele rendered some account to Gov. Alvarado in November sending some of his sailors ashore to assist the Gov. in a revolution in California. My Grandmother lived nearly a year in the adobe house now standing in Santa Barbara once the home of the de La Guerra family. When I first came to California the older members of the family were living and remember my grandparents. They showed me a chinese writing desk which is still in the house with a brass plate enscribed From Captain Joseph Steele to G. de la Guerra 1832. Grandfather Steele bought a tract of land in Happy Valley and built a house but the water was so bad he was obliged to leave and was carried to his ship on a hammock.  The house was long known as Captain Steeles folly. No attempt has ever been made by his surviving family to claim any part  of the land  from 1826-1840. This part of California history was very important. Where the ships came from Boston laden with Yankee Notions, Needles, pins, cloth & Every thing the missions needed in worldly goods.  They also brought with them ideas of liberty and freedom  It was due to the coming of these Boston Ships that California was saved to the United States.  In my grandfathers time nearly all the merchant trade of the world was carried by American Ships now almost none.  One hundred less boats went out from San Francisco than the previous year.  Repeal the La Follet bill that has  caused us to sell our best ships to the Japanese and our commerce will once more thrive on the Pacific.