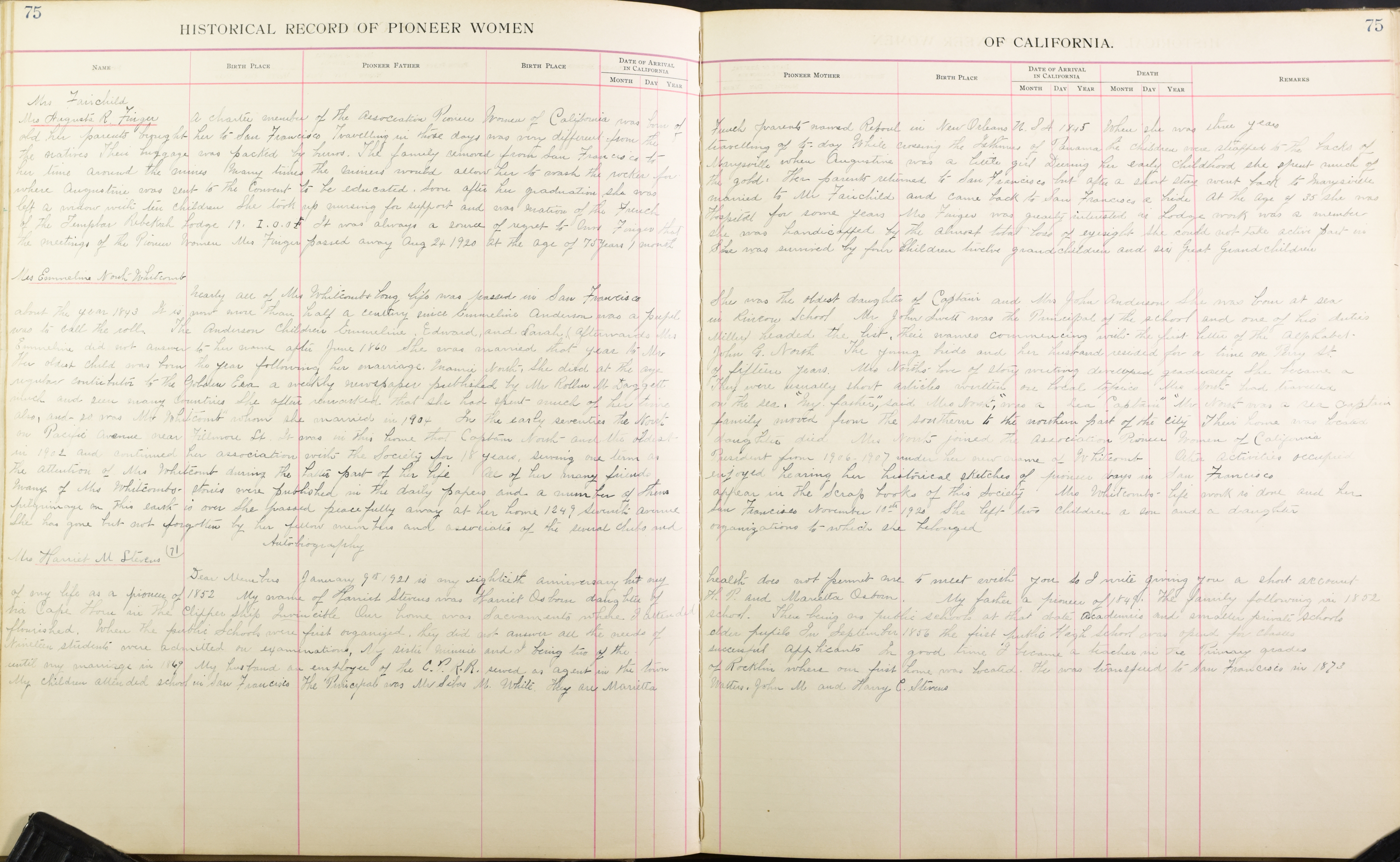 A charter member of the Association of Pioneer Women of California was born of French parents named Repoul in New Orleans U.S.A. 1845. When she was three years old, her parents brought her to San Francisco. Travelling [illegible] in those days was very different from the travelling of today. While crossing the Isthmus of Panama the children were strapped to the backs of the natives. Their luggage was packed by burros. The family removed from San Francisco to Marysville when Augustine was a little girl. During her early childhood she spent much of her time around the mines. Many times the miners would allow her to wash the rocker for the gold. Her parents returned to San Francisco but after a short stay went back to Marysville where Augustine was sent to the Convent to be educated. Soon after her graduation she was married to Mr. Fairchild and came back to San Francisco a bride. At the age of 35 she was left a widow with ten children. She took up nursing for support and was Matron of the French Hospital for some years. Mrs. Finger was greatly interested in Lodge work was a member of the Templar Rebekah Lodge 19. I.O.O.F. It was always a source of regret to Mrs. Finger that she was handicapped by the almost total loss of eyesight. She could not take active part in the meetings of The Pioneer Women. Mrs. Finger passed away Aug 24 1920 at the age of 75 years 1 month. She was survived by four children, twelve grandchildren, and six Great Grandchildren

Nearly all of Mrs. Whitcomb’s long life was passed in San Francisco. She was the oldest daughter of Captain and Mrs. John Anderson. She was born at sea about the year 1843. It is now more than half a century since Emmeline Anderson was a pupil in Rincon School. Mr. John Swell was the Principal of the school and one of his duties was to call the roll. The Anderson children Emmeline, Edward, and Sarah. Afterwards Mrs. Miller headed the list, their names commencing with the first letter of the alphabet – Emmeline did not answer to her name after June 1860. She was married that year to Mr. John G. North. The young bride and her husband resided for a time on Terry St. Her oldest child was born the year following her marriage. Enamie North, She died at the age of fifteen years. Mrs. North’s love of story writing developed gradually. She became a regular contributor to the Golden Era a weekly newspaper published by Mr. Rollin M. Daggett. They were usually short articles written on local topics. Mrs. North had travelled much and seen many countries. She often remarked that she had spent much of her time on the sea, “my father,” said Mrs. North, “was a sea Captain” “Mr. North was a sea Captain also, and so was Mr. Whitcomb” whom she married in 1904. In the early seventies the North family moved from the southern to the northern part of the city. Their home was located on Pacific Avenue near Fillmore St. It was in this home that Captain North and the oldest daughter died. Mrs. North joined the Association Pioneer Women of California in 1902 and continued her association with the Society for 18 years, serving one term as President from 1906 – 1907 under her new name of Whitcomb. Other activities occupied the attention of Mrs. Whitcomb during the latter part of her life.  All of her many friends enjoyed hearing her historical sketches of pioneer days in San Francisco. Many of Mrs. Whitcomb’s stories were published in the daily papers and a number of them appear in the Scrap books of this Society. Mrs. Whitcomb’s life work is done and her pilgrimage on this earth is over. She passed peacefully away at her home 1249 Seventh Avenue San Francisco November 10th 1920. She left five children a son and a daughter.  She has gone but not forgotten by her fellow members and associates of the several clubs and organizations to which she belonged.

Dear Members January 9th 1921 is my eightieth anniversary but my health does not permit one to meet with you so I write giving you a short account of my life as a pioneer of 1852. My name of Harriet Stevens was Harriet Osborn daughter of H.P. and Marietta Osborn. My father a pioneer of 1849. The family following in 1852 via Cape Horn in The Clipper Ship Invincible. Our home was Sacramento where I attended school. There being no public schools at that date academies and smaller private schools flourished. When the public schools were first organized, they did not answer all the needs of older pupils In September 1856 the first public High School was opened for classes. Nineteen students were admitted on examinations. My sister Minnie and I being two of the successful applicants. In good time I became a teacher in the Primary grades until my marriage in 1869. My husband an employee of the C.P.R.R. served as agent in the town of Rocklin where our first home was located. He was transferred to San Francisco in 1873. My children attended school in San Francisco. The Principal was Mr. Silas M. White. They are Marietta Watters, John M. and Harry C. Stevens