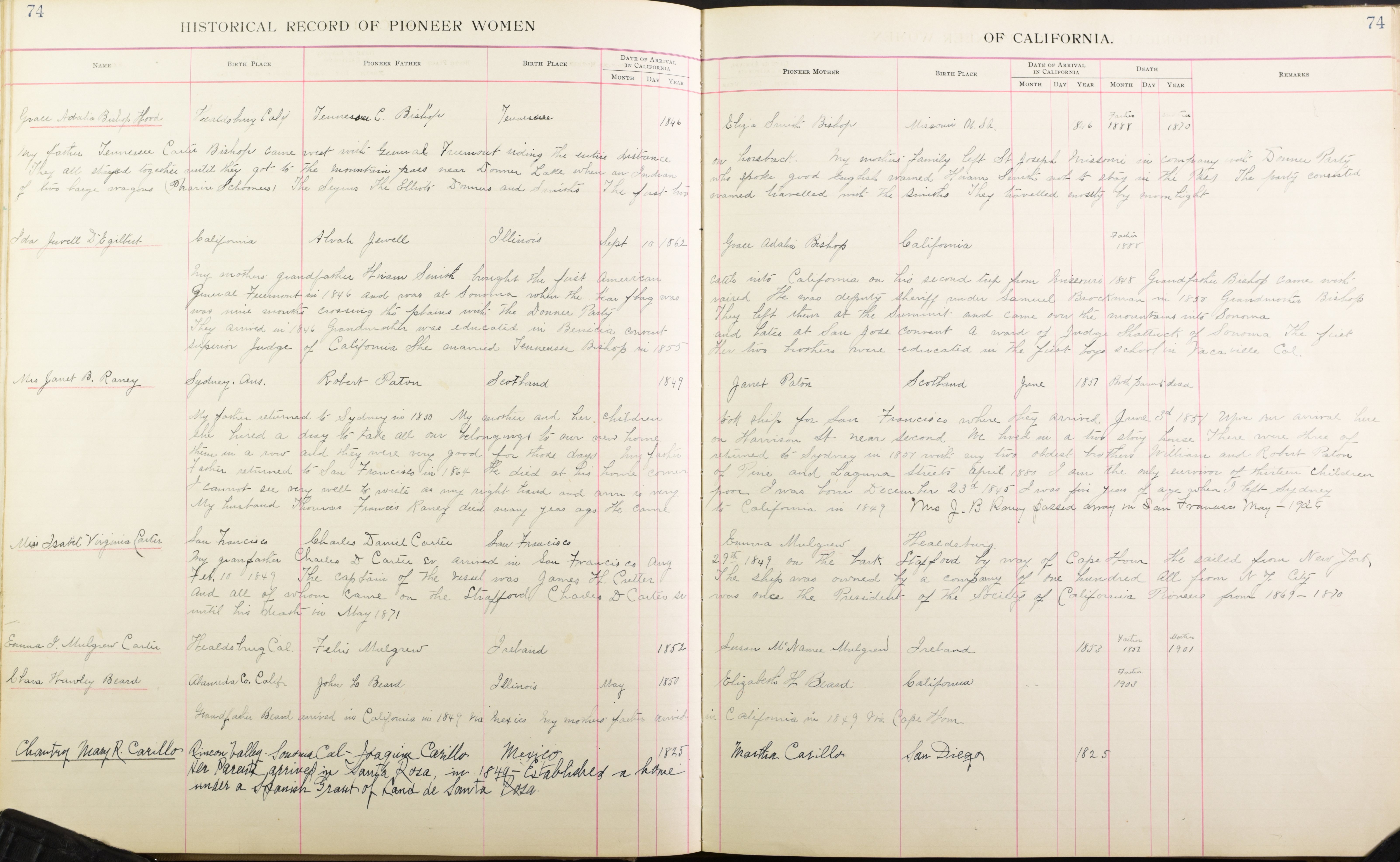 Remarks: My father Tennessee Carter Bishop came west with General Freemont riding the entire distance on horseback.  My mothers’ family left St Joseph Missouri in company with Donner Party.  They all stayed together until they got to the mountain pass near Donner Lake when an Indian who spoke good English warned Hiram Smith not to stay in the Pass.  The party consisted  of two large wagons (Prarie Schooners) The Seynes, The Elliots, Donners, and Smiths. The first two named travelled with the Smiths. They travelled mostly by moon light.

Remarks:My mothers’ grandfather Hiram Smith brought the first American cattle into California on his second trip from Missouri 1848.  Grandfather Bishop came with General Freemont in 1846 and was at Sonoma where the bear flag was raised.  He was deputy sheriff under Samuel Brockman in 1858.  Grandmother Bishop was nine months crossing the plains with the Donner Party.  They left them at the Summit and came over the mountains into Sonoma.  They arrived in 1846.  Grandmother was educated in Benicia convent and later at San Jose convent.  A ward of Judge Shattuck  of Sonoma.  The first Superior Judge of California.  She married Tennessee Bishop in 1855.  Her two brothers were educated in the first boys school in Vaca Ville, Cal.

Remarks: My father returned to Sydney in 1850. My mother and her children took ship for San Francisco where they arrived June 3d 1851.  Upon our arrival here she hired a dray to take all our belongings to our new home on Harrison St near second.  We lived in a two story house.  There were three of them in a row and they were very good for those days.  My father returned to Sydney in 1851 with my two oldest brothers William and Robert Paton.  Father returned to San Francisco in 1864.  He died at his home corner of Pine and Laguna Streets April 1880.  I am the only survivor of  thirteen children.  I cannot see very well to write as my right hand and arm is very poor.  I was born December 23d  1845.  I was five years of age when I left Sydney.  My husband Thomas Francis Raney died many years ago.  He came to California in 1849.  Mrs. J. B Raney passed away in San Francisco May –  1926.

My grandfather Charles D Carter Sr arrived in San Francisco Aug 29th 1849 on the bark Stafford by way of Cape Horn.  He sailed from New York Feb. 10 1849.  The captain of the vessel was James H. Cutter. The ship was owned by a company of one hundred. All from N.Y. City and all of whom came on the Strafford. Charles D. Carter Sr was once the President of the Society of California Pioneers from 1869-1870 until his death in May 1871

Remarks: Her Parents arrived in Santa Rosa, in 1849 – Established a home under a Spanish Grant of Land de Santa Rosa