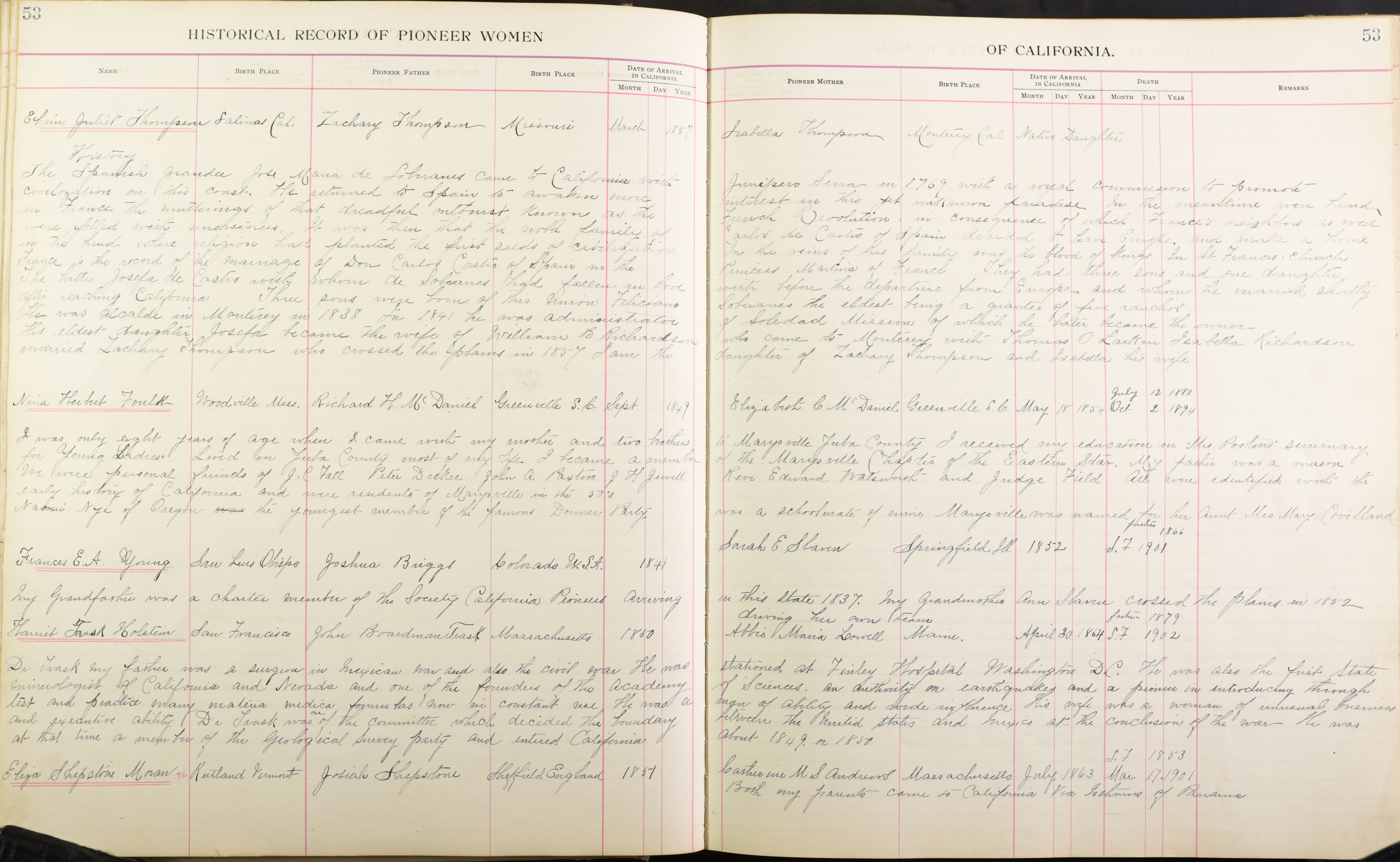 The Spanish grandee Jose Maria de Soberanes came to California with Junipero Serra in 1769 with a royal commission to promote civilization on this coast. He returned to Spain to awaken more interest in this yet unknown paradise. In the meantime, were heard in France mutterings of that dreadful [illegible] known as the French Revolution in consequence of which France’s neighbors as well were filled with uneasiness. It was then that the noble family of Carlos de Castro of Spain decided to leave Europe and make a home in the land where religion had planted the first seeds of civilization. In the veins of his family was the blood of kings. In St. Francis Church France is the record of the marriage of Don Carlos Castro of Spain [illegible] the Princess Marlina of France. They had three sons and one daughter. The latter Josefa de Castro with whom de Soberanes had fallen in love with before the departure from Europe and whom he married shortly after reaching California. Three sons were born of this union Feliciano de Soberanes the eldest being a grantee of five ranchos. He was alcalde in Monterey in 1838. In 1841, he was administrator of Soledad Mission by which he later became the owner. The eldest daughter Josefa became the wife of William B. Richard who came to Monterey with Thomas O. Larkin. Isabella Richardson married Zachary Thompson who crossed the plains in 1857. I am the daughter of Zachary Thompson and Isabella his wife.

Remarks: I was only eight years of age when I came with my mother and two brothers to Marysville Yuba County. I received my education in Mrs. Poston’s seminary for young ladies. Lived in Yuba County most of my life I became a member of the Marysville chapter of the Eastern Star. My father was a mason. We were personal friends of J. C. Fall Peter Decker John A Paxton J H Jewett Rev Edward Walsworth and Judge Field. All were identified with the early history of California and were residents of Marysville in the 50’s. Naomi Nye of Oregon the youngest member of the famous Donner Party was a schoolmate of mine. Marysville was named for her Aunt Mrs. Mary Covilland.

Remarks: My grandfather was a charter member of the Society of California Pioneers Arriving in this state 1837. My Grandmother Ann Slaven crossed the plains in 1852 driving her own team.

Remarks: Dr. Trask my father was a surgeon in Mexican War also the Civil War. He was stationed at Finley Hospital Washington D.C. He was also the first state mineralogist of California and Nevada and one of the founders of the Academy of Sciences. An authority on earthquakes and a pioneer in introducing through test and practice many maeria medica formulas now in constant use. He was a man of ability and wide influence .His wife was a woman of unusual business and executive ability. Dr. Trask was one of the committee which decided the boundary between the United States and Mexico at the conclusion of the war. He was at that time a member of the Geological Survey party and entered California about 1849 or 50.

Remarks: Both my parents came to California via Isthmus of Panama