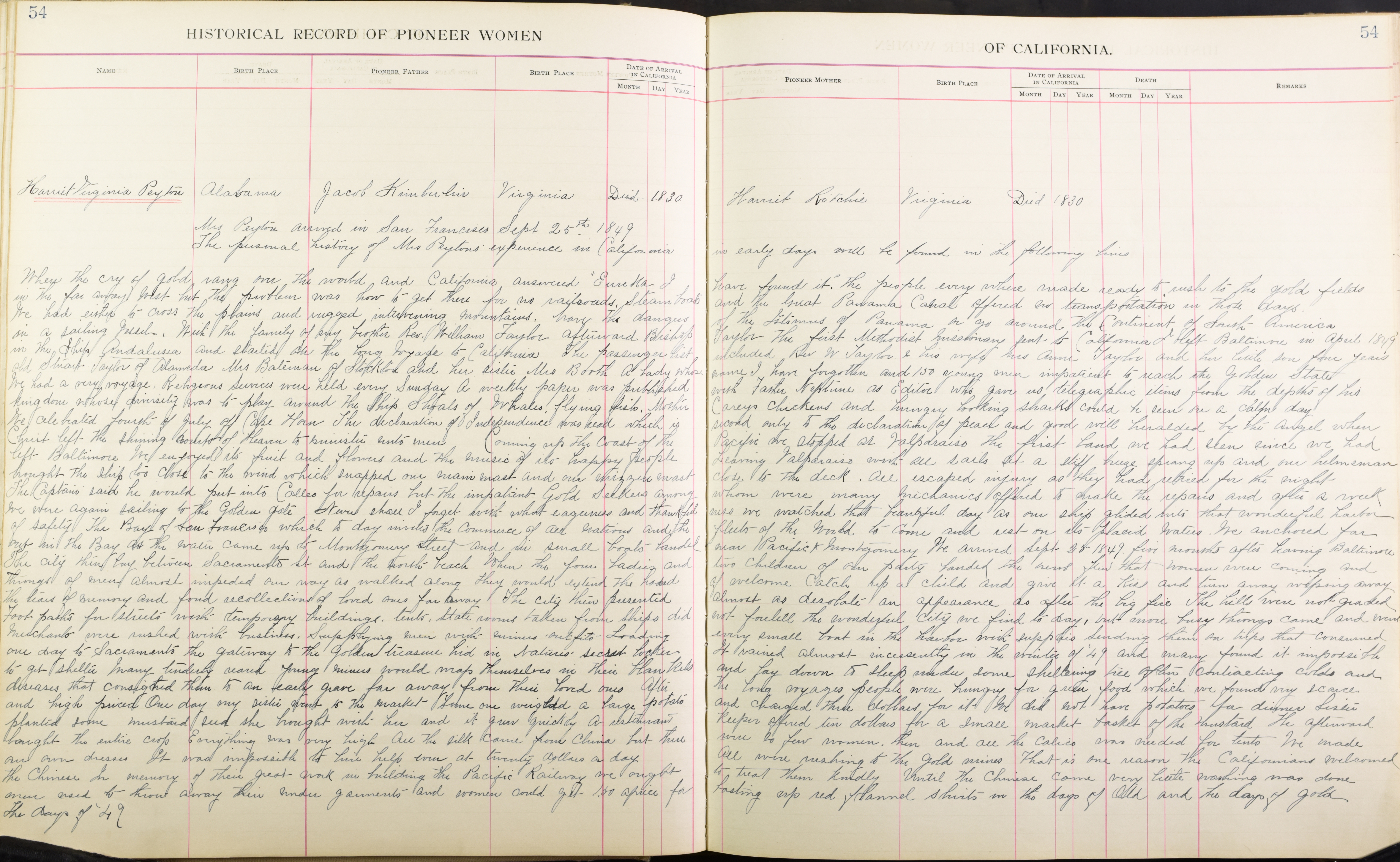 The personal history of Mrs. Peyton’s experience in California in early days will be found in the following lines. When the cry of gold rang over the world and California answered “Eureka I have found it”, the people everywhere made ready to rush to the gold fields in the far away West but the problem was how to get there for no railroads steamboats and the great Panama Canal offered no transportation in those days. We had either to cross the plains and rugged interweaving mountains, have the dangers of the Isthmus of Panama or go around the continent of South America on a sailing vessel. With the family of my brother Reverend William Taylor, afterward Bishop Taylor the first Methodist missionary sent to California I left Baltimore in April 1849 in the ship Andalusia and sailed on the long voyage to California. The passenger list included Rev. W Taylor and his wife Mrs. Anne Taylor and her little son four years old. Stuart Taylor of Alameda Mrs. Baleiman of Stockton and his sister Mrs. Booth. A lady whose name I have forgotten and150 young men impatient to reach the golden state. We had a voyage religious services were held every Sunday. A weekly paper was published with father Neptune as editor who gave us telegraphic items from the depths of his kingdom whose diversity was play around the ship. Shoals of whales, flying fish. Mother Careys chickens and hungry looking sharks could be seen on a calm day. We celebrated Fourth of July off Cape Horn. The declaration of independence was read which is second only to the declaration of peace and good will heralded by the angel when Christ left the shinning comfort to nourish [illegible] unto men. Coming up the coast of the Pacific we stopped at Valparaiso the first land we had seen since we had left Baltimore. We enjoyed its fruits and flowers and the music of its happy people. Leaving Valparaiso with all sails set a stiff breeze sprang up and our helmsman brought the ship too close to the wind which snapped our mainmast and our mizzen mast close to the deck. All escaped injury as they has retired for the night. The Captain said he would put into Calles for repairs but the impatient gold seekers among whom were many mechanics offered to make the repairs and after a week we were again sailing to the golden gate. Never shall I forget with what eagerness and thankfulness we watched that beautiful day as our ship glided into that wonderful harbor of safety. The Bay of San Francisco which today invites the commerce of all nations and the fleets of the world to come and rest on its placid waters. We anchored far out in the Bay as the water came up to Montgomery Street and in small boats landed near Pacific + Montgomery. We arrived Sept 25 1849 five months after leaving Baltimore. The city then lay between Sacramento St and the north beach. When the four ladies and two children of our party landed the news flew that women were coming and throngs of men almost impeded our way as walked along. They would extend their hand of welcome. Catch up a child and give it a kiss and turn away whipping away the tears of memory and fond recollections of loved ones far away. The city then presented almost as desolate an appearance as after the big fire. The hills were not graded. Foot paths for streets with temporary buildings, tents, state rooms taken form ships did not foretell the wonderful city we find today, but more busy things come and even merchants were rushed with business. Supplying men with miner’s outfits- lodging every small boat in the harbor with supplies sending them on trips that consumed one day to Sacramento the gateway to the golden treasure hid in natures secret locker. It rained almost incessantly in the winter of 49’ and many found it impossible to get shelter tenderly reared young miners would wrap themselves in their blankets and lay down to sleep under some sheltering tree after contracting colds and diseases that consigned them to an early grave far away from their loved ones. After the long voyages people where hungry for green food which we found very scarce and high priced. One day my sister went to the market. Someone weighted a large potato and charged three dollars for it We did not have potatoes for dinner Sister planted some mustard seed she brought with her and it grew quickly. A restaurant keeper offered ten dollars for a small market basket of the mustard. He afterward bought he entire crop Everything was very high All the silk came from China but there were so few women then and all the calico was needed for tents We made our own dresses. It was impossible to hire help even at twenty dollars a day All were rushing to the gold mines That is one reason the Californians welcomed the Chinese. In memory of the great work in building the Pacific Railroad we ought to treat them kindly. Until the Chinese came very little washing was done men used to throw away their undergarments and women could get 1.50 apiece for fasting up red flannel shirts in the days of old and the days of gold.