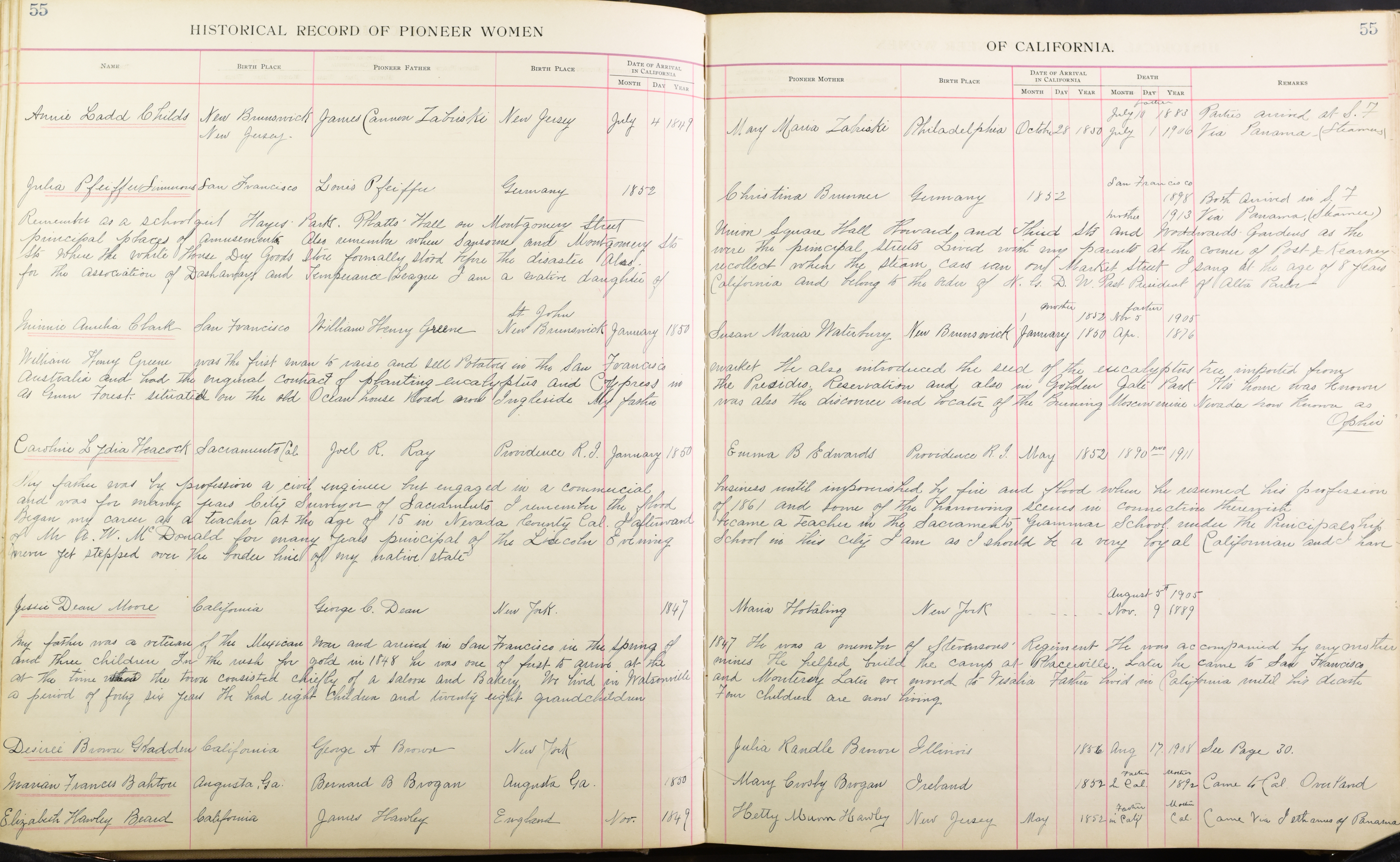 Remarks: Both arrived in S.F. via Panama.

Remember as a school girl Hayes Park Platts Hall on Montgomery St Union Square Hall Howard and Third St’s and Woodward’s Gardens as the principle places of amusement. Also remember when Sansome and Montgomery St’s were the principle streets. Lived with my parents at the corner of Post + Kearney where the white house dry goods store formerly stood before the disaster. Also recollect when the steam cars ran out Market Street I sang at the age of 8 years for the association of dashaways and temperance league. I am a native daughter of California and belong to the order of N.G.D.W. Past President of the Alta Parlor.

Remarks:  William Henry Greene was the first man to raise and sell potatoes in the San Francisco Market. He also introduced the seed of the eucalyptus tree imported from Australia and had the original for planting eucalyptus and cypress in the Presidio Reservation and also Golden Gate Park. His home was known as Green Forest situated on the old Ocean House Road and Ingelside. My father was also the discoverer and locator of Burning Moscow Mine Nevada now known as Ophir.

Remarks: My father was by profession a civil engineer but engaged in a commercial business until impoverished by fire and flood when he resumed his profession and was for many years City Surveyor of Sacramento. I remember the flood of 1861 and some of the harrowing scenes in connection therewith. Began my career as a teacher at the age of 15 in Nevada County, Cal. I afterward became a teacher in the Sacramento Grammar School under the Principleship of Mr. A. W. McDonald for many years principle of the Lincoln Evening School in the city. I am as I should be a very loyal Californian and I have never yet stepped over the border line of my native state.

Remarks: My father was a Veteran of the Mexican War and arrived in San Francisco in the spring of 1847. He was a member of Stevenson’s Regiment. He was accompanied by my mother and three children. In the rush for gold in 1848 he was of the first to arrive at the mines. He helped build the camps at Placerville. Later he came to San Francisco at the time when the town chiefly of a saloon and a bakery. We lived in Watsonville and Monterrey. Later we moved to Visalia Father lived in California until his death a period of forty six years. He had eight children and twenty eight grandchildren. Four children are now living

Remarks: Came Via Isthmus of Panama