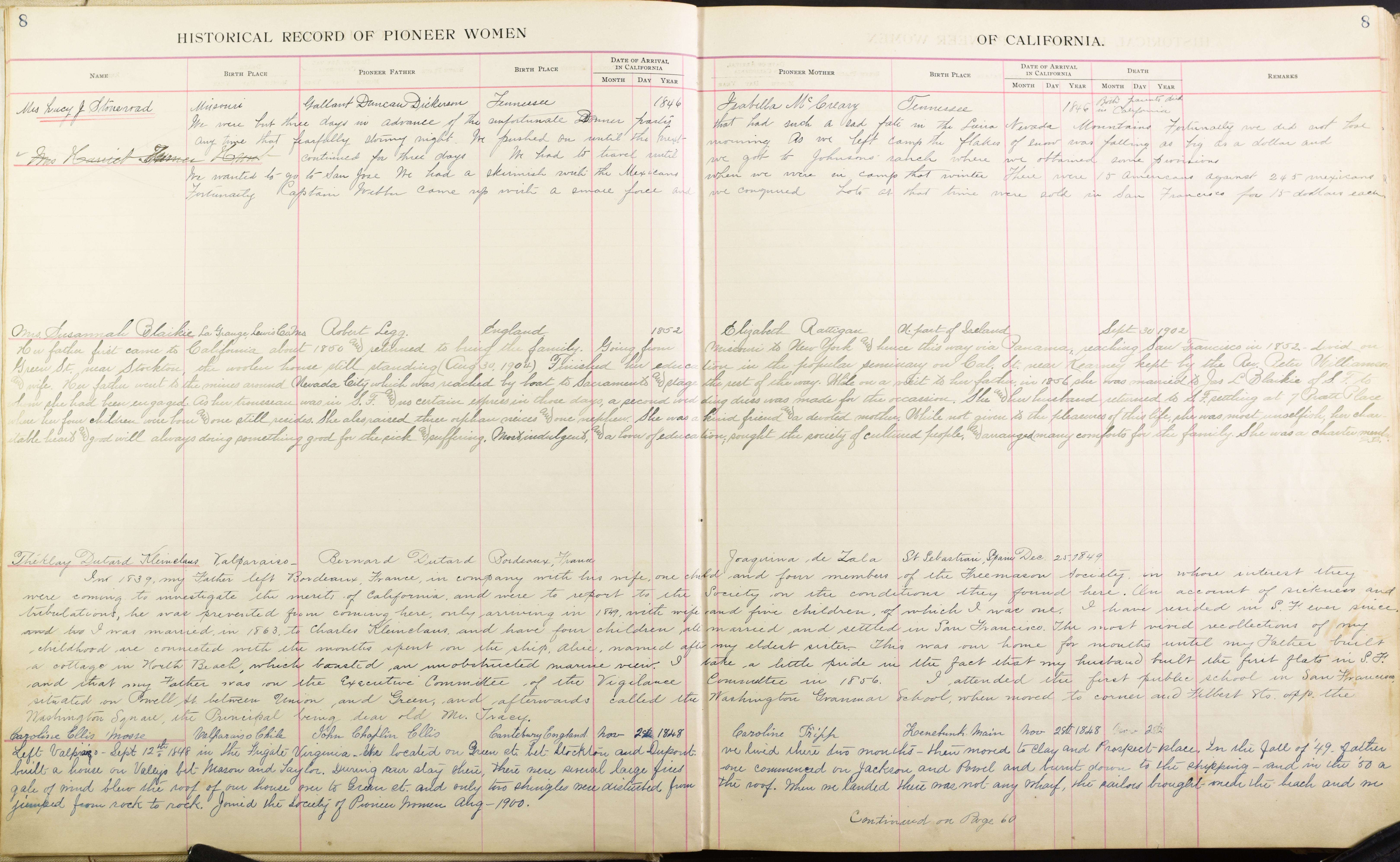 Remarks: We were but three days in advance of the unfortunate Donner party that had such a sad fate in the Sierra Nevada Mountains  Fortunately, we did not lose any time that fearfully stormy night. We pushed on until the next morning. As we left camp the flakes of snow was falling as big as a dollar and continued for three days. We had to travel until we got to Johnsons’ ranch where we obtained some provisions. We wanted to go to San Jose. We had a skirmish with the Mexicans when we were in camp that winter. There were 15 Americans against 245 Mexicans. Fortunately Captain Webber came up with a small force and we conquered. Lots at that time were sold in San Francisco for 15 dollars each.

Remarks:  Her father first came to California about 1850 and returned to bring the family. Going from Missouri to New York and hence this way via Panama, reaching San Francisco in 1852. Lived on Green St. near Stockton, the wooden house still standing (Aug.30, 1902) Finished her education in the popular seminary on Cal.St. near Kearny kept by the Rev. Peter Williamson and wife. Her father went to the mines around Nevada City which was reached by boat to Sacramento and stage the rest of the way. While on a visit to her father in 1856 she was married to Jas L. Blaikie of S.F. to whom she had been engaged. As her trousseau was in S.F. and no certain express in those days, a second wedding dress was made for the occassion [sic]. She and her husband returned to S.F. settling at 7 Pratt Place where her four children were born and one still resides. She also raised three orphan nieces and one orphan. She was a kind friend and a devoted mother. While not given to the pleasures of this life, she was most unselfish, her charitable heart and good will always doing something good for the sick and suffering. Most indulgent and a lover of education, sought the society of cultured people and arranged many comforts for the family. She was a charter member. S.B.

Remarks: In 1839, my father left Bordeaux, France in company with his wife, one child, and four members of the Freemason Society in whose interest they were coming to investigate the merits of California and were to report to the Society on the conditions they found here. On account of sickness and tribulations, he was prevented from coming here, only arriving in 1849 with wife and five children, of which I was one. I have resided in S. F ever since. I was married in 1863 to Charles Kleinclaus and have four children, all married and settled in San Francisco. The most vivid recollections of my childhood are connected with the months spent on the ship Alice, named after my eldest sister. This was our home for months until my Father built a cottage in North Beach, which boasted an unobstructed marine view. I take a little pride in the fact that my husband built the first flats in S.F and that my Father was on the Executive Committee of the Vigilance Committee in 1856. I attended the first public school in San Francisco situated on Powell St. between Union, and Green, and afterwards called the Washington Grammar School, when moved to corner and Filbert St. opp. The Washington Square, the Principal being dear old Mr. Tracy

Left Valparaiso – Sept 12th, 1848 in the Frigate Virginia. We located on Green at bet Stockton and Dupont. We lived there two months then moved to Clay and Prospect-place. In the fall of ‘49, father built a house on Vallejo bet Mason and Taylor. During our stay there, there were several large fires gale of wind blew the roof of our house over to Green st. and only two shingles were disturbed from the roof. When we landed there was not any wharf, the sailors brought near the beach and we jumped from rock to rock. Joined the Society of Pioneer Women Aug – 1900.