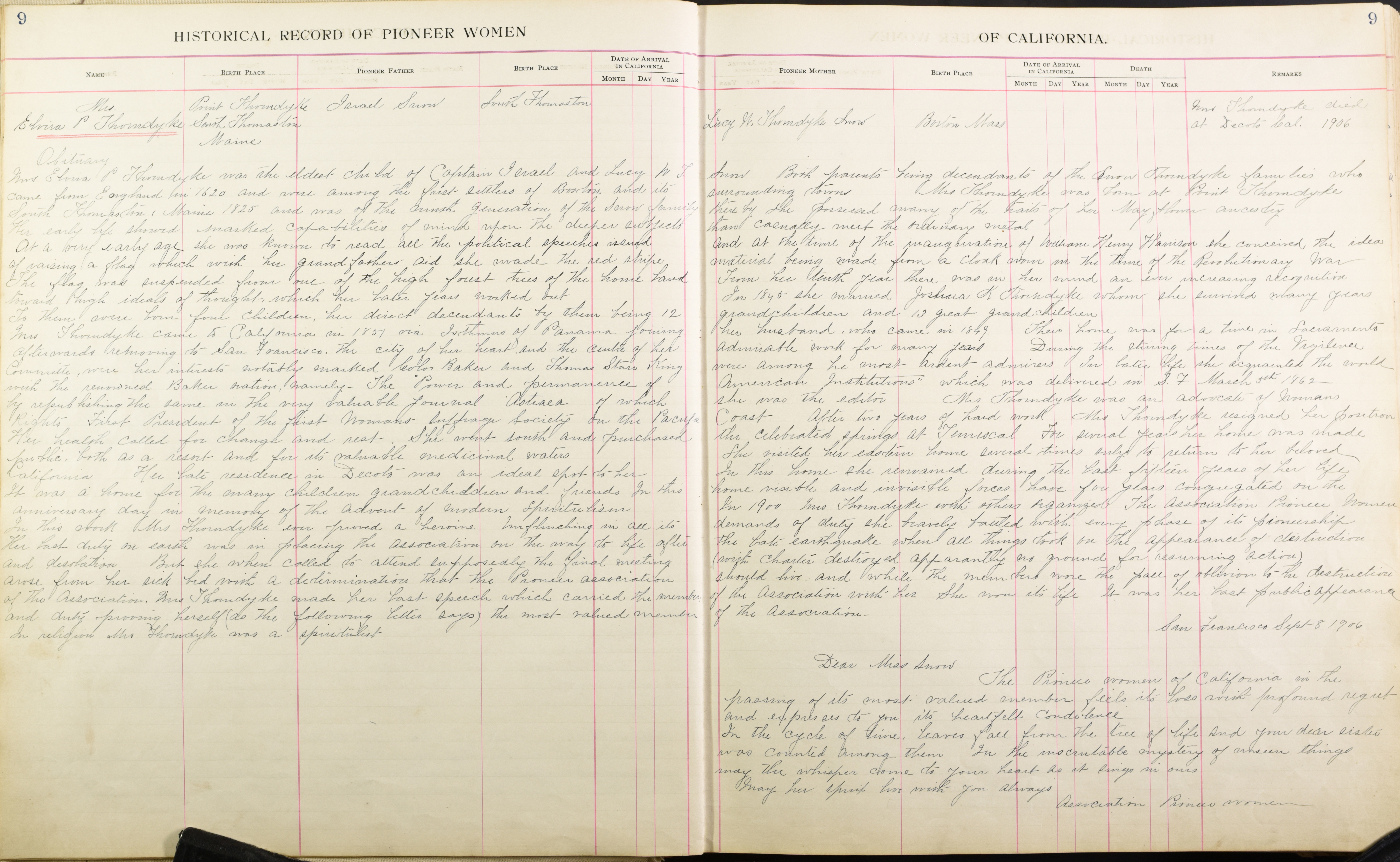 Mrs. Elvira Thorndyke was the eldest child of Captain Israel and Lucy W. T. Snow. Both parents being descendants of the Snow Thorndyke families who came from England in 1620 and were among the first settlers of Boston and its surrounding towns. Mrs. Thorndyke was born at Point Thorndyke, South Thorndyke, Maine 1825 and was of the ninth generation of the Snow family thereby she possessed many of the traits of her Mayflower ancestry.

Her early life showed marked capabilities of mind upon the deeper subjects than casually meet the ordinary metal.

At a very early age she was known to read all the political speeches issued and at the time of the inauguration of William Henry Harrison she conceived the idea of raising a flag which with her grandfathers aid she made the red stripe, material being made from a cloak worn in the time of the Revolutionary War. The flag was suspended from one of the high forest trees of the home land. From her tenth year there was in her mind an ever increasing recognition toward high ideals of thoughts which her later years worked out. In 1840 she married Joshua K.Thorndyke whom she survived many years. To them were born four children, her direct decendants [sic] by them being 12 grandchildren and 13 great-grandchildren

Mrs.Thorndyke came to California in 1851 via Isthmus of Panama joining her husband who came in 1849. Their home was for a time in Sacramento. Afterwards returning to San Francisco. The city of her heart and the center of her admirable work for many years. During the stirring times of the Vigilence [sic] Committee were her interests notably marked Cols. Baker and thomas Starr King were among he most ardent admirers. In later life she acquainted the world with the renowned Baker oration, namely – The “Power and permanence of American Institutions”  which was delivered in S.F. March 5th 1862 by republishing the same in the very valuable journal “Astiaca” of which she was the editor. Mrs. Thorndyke was an advocate of Womans Rights. First President of the first Womans Suffrage Society on the Pacific Coast. After two years of hard work Mrs. Thorndyke resigned her position. Her health called for change and rest. She went south and purchased the celebrated springs at Temescal. For several years her home was made public both as a resort and for its valuable medicinal waters. She visited her eastern home several times only to return to her beloved California. Her late residence in decoto – was an ideal spot to her. In this home she remained during the last fifteen years of her life. It was a home for the many children grandchildren and friends. In this home visible and invisible forces have for years congregated on the anniversary day in memory of The Advent of modern Spiritulism. In 1900 Mrs. Thorndyke with others organized The Association Pioneer Women. In this work Mrs. Thorndyke soon proved a heroine. Unflinching in all its demands of duty she bravely battled with every phase of its pioneership. Her last duty on earth was in placing the association on the way to life after the late-earthquake when all things took on the appearance of destruction and desolation. But she when called to attend supposedly the final meeting (with Charter destroyed apparantly [sic] no ground for resuming action) arose from her sick bed with a determination that the Pioneer association should live and while the members wore the pall of oblivion to the destruction of The Association. Mrs. Thorndyke made her last speech which carried the members of the Association with her. She won its life. It was her last public appearance and duty proving herself (as the following letter says) the most valued member of The Association.

In religion Mrs. Thorndyke was a spiritulist.

The Pioneer women of California in the passing of its most valued member feels its loss with profound regret and expresses to you its heartfelt condolence.

In the cycle of time, leaves fall from the tree of life and your dear sister was counted among them. In the inscrutable mystery of unseen things may the whisper come to your heart as it sings in ours.

May her spirit live with you always.