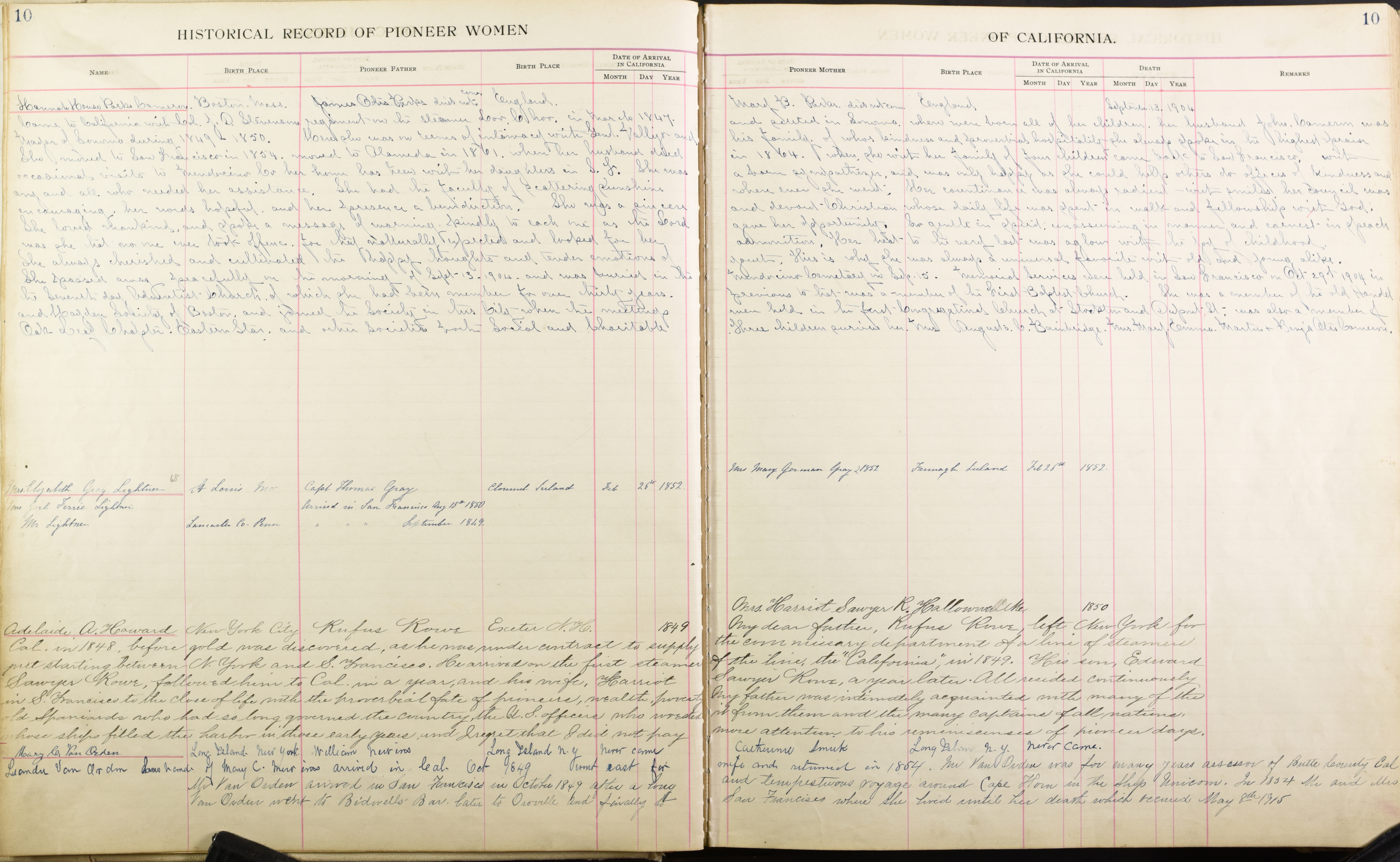 Remarks: Came to California with Col. J. D. Stevenson’s regiment on the steamer Loo C. Loo March 1847 and settled in Sonoma where were born all of her children, her husband John Cameron was mayor of Sonoma 1849 – 1850. Here she was in terms of intimacy with General Vallejo and his family of whose kindness and proverbal hospitality she always spoke in the highest praise. She moved to San Francisco in 1854, moved to Alameda in 1861 where her husband died in 1864. When she with her family of four children came back to San Francisco, with occasional visits to Mendocino, Co. her home has been with her daughters in S. F. She was a born sympathizer and she was only happy as she could help others do offices of kindness and any and all who needed her assistance. She had the faculty of scattering sunshine where ever she went. Her countenance was always radient [sic] – with smiles. Her council was encouraging, her words helpful, and her presence a benediction. She was a sincere and devout Christian whose daily life was spent in walk and fellowship with God. She loved mankind, and spoke a message of warning kindly to each one as the Lord gave her opportunity. So gentle in spirit, unassuming in manner and earnest in speach [sic] was she that no one ever took offense for that naturally expected and looked for her admonitions. Her heart to the very last was aglow with the joy of childhood. She always cherished and cultivated the happy thoughts and tender emotions of youth. This is why she was always a universal favorite with old and young alike. She passed away peacefully in the morning of Sept 13, 1904 and was buried in the Mendocino Cemetery on Sep.15.. Memorial Services were held in San Francisco on Oct 29th 1904 in the Seventh-day Adventist Church, of which she had been member for over thirty years. Previous to that was a member of the First Baptist Church.  She was a member of the old Handel and Hayden of Boston and joined the Society in this city when the meetings were held in the First-Congregational Church at Stockton and Dupont St., was also a member of Oak Leaf Chapter, Eastern Star, and other Socialite work -Social and Charitable. Three children survive her. Mrs. Augusta C. Bainbridge, Mrs. Mary Emma Martins and Benja Otis Cameron.

Remarks: My dear father, Rufus Rowe, left New York for Cal. In 1848 before, gold was discovered, as he was under contract to supply the commissary department of a line of steamers just starting between N. York and San. Francisco. He arrived on the first steamer of the line, the “California,” in 1849. His son, Edward Sawyer Rowe, followed him to Cal. In a year, and his wife, Harriet Sawyer Rowe, a year later. All resided continuously in S. Francisco to the close of life with the proverbial fate of pioneers, wealth, poverty. My father was intimately acquainted with many of the old Spaniards who had so long governed the country, the U.S officers who wrested it from them and the many captains of all nations whose ships filled the harbor in those early years and I regret that I did not pay more attention to his reminiscence of pioneer days.

Remarks: Leander Van Orden, husband of Mary C. Newins arrived in Cal. Oct. 1849. Went east for wife and returned in 1854. Mr. Van Orden was for many years assessor of Butte  County, Cal. Van Orden went to Bidwells Bar, later to Orville and finally to San Francisco where she lived until her death which occurred May 8th 1915.