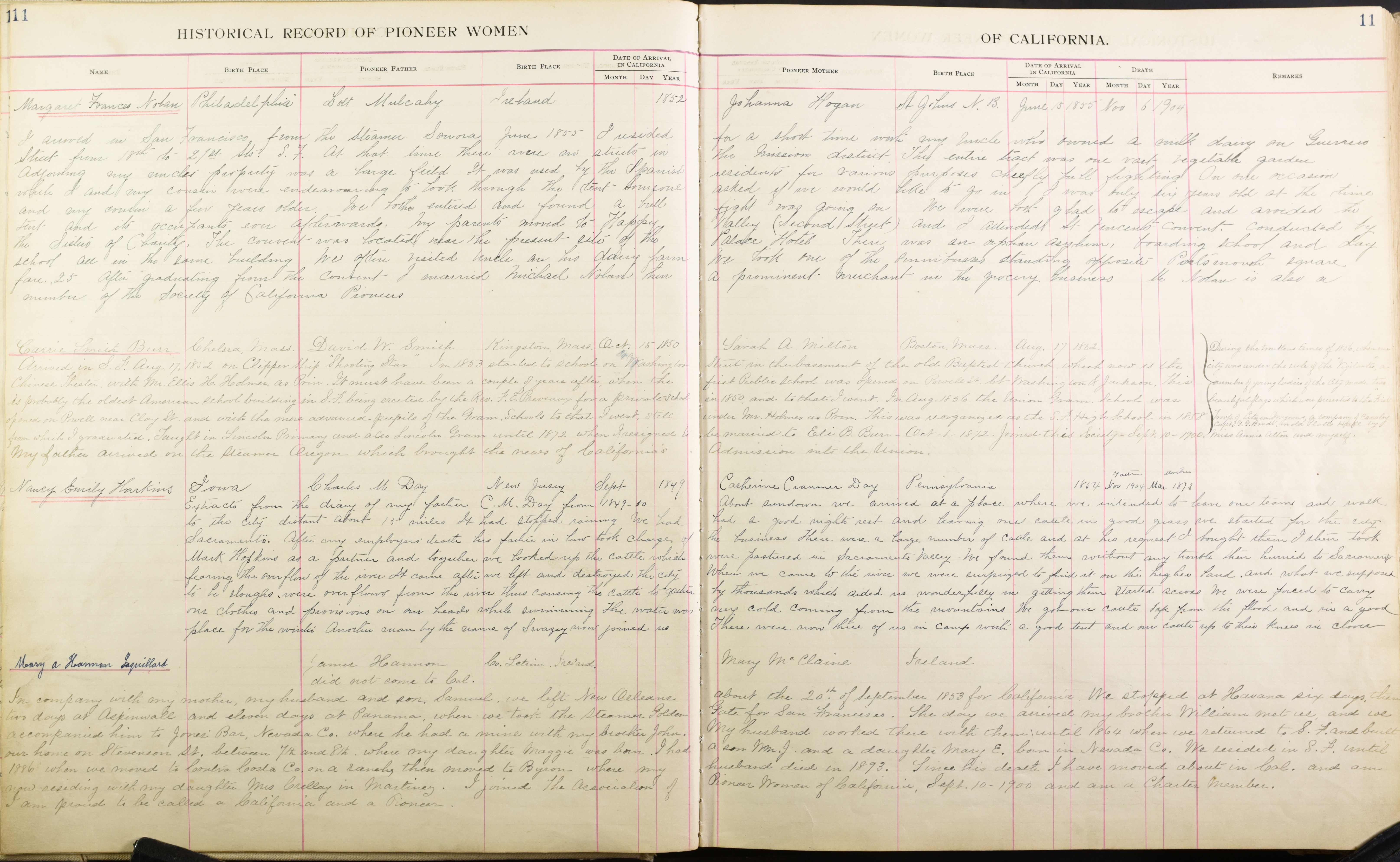 Remarks: I arrived in San Francisco from the steamer Sonora June 1855. I resided for a short time with my uncle who owned a milk dairy on Guerrero Street from 18th to 21st Sts. S.F. At that time there were no streets in the Mission district. The entire track was one vast vegetable garden. Adjoining my uncle’s property was a large field. It was used by the Spanish residents for various purposes chiefly bull fighting. On one occasion while I and my cousin were endeavoring to look through the tent, someone asked if we would like to go in. I was only six years old at the time and my cousin a few years older. We both entered and found a bull fight was going on. We were both glad to escape and avoided the street tent and its occupants ever afterwards. My parents moved to Happy Valley (Second Street) and I attended St. Vincents convent, conducted by the Sisters of Charity. The convent was located near the present site of the Palace Hotel. There was an orphan asylum, boarding school, and day school all in the same building. We often visited uncle on his dairy farm. We took one of the omnibuses standing opposite Portsmouth Square fare .25. After graduating from the convent I married Michael Nolan then a prominent merchant in the grocery business. Mr. Nolan is also a member of the Society of California Pioneers.

Remarks: Arrived in S.F. August 17, 1852, on Clipper Ship “Shooting Star.” In 1853 started school on Washington Street in the basement of the old Baptist Church, which now is the Chinese Theater with Mr. Ellis H. Holmes as Prin. It must have been a couple of years after, when the first Public School was opened on Powell St bt Washington & Jackson. This is probably the oldest American school building in S.F. being erected by the Rev. F.E. Prevaux for a private school in 1850 and to that I went. In Aug. 1856 the Union Grammar School was opened on Powell near Clay St. and with the more advanced pupils of the Gram. schools to that I went, still under Mr. Holmes as Prin. This was reorganized as the S.F. High school in 1858 from which I graduated. Taught in Lincoln Primary and also Lincoln Gram. until 1872 when I resigned to be married to Eli B. Burr – October 1, 1872. Joined this society September 10, 1900. My father arrived on the Steamer Oregon which brought the news of California’s Admission into the Union.

[Written in margin] During the tumultous times of 1856, when the city was under the rule of the Vigilantes, a number of young ladies of the City made two beautiful flags which were presented to the First Troop of City in Dragoons, a company of Cavalry Capt. G.G. Bradt, in old Platts Hall by Miss Annie Allen and myself.

About sundown we arrived at a place where we intended to leave our teams and walk to the city distant about 15 miles. It had stopped raining. We had had a good nights rest and leaving our cattle in good grass we started for the city Sacramento. After my employers’ death his father in law took charge of the business. There were a large number of cattle and at his request I bought them & then took Mark Hopkins as a partner and together we loaded up the cattle which were pastured in Sacramento Valley. We found them without any trouble then hurried to Sacramento fearing the overflow of the river. It came after we left and destroyed the city. When we came to the river we were surprised to find it on the higher land, and what we supposed to be sloughs, were overflows from the river thus causing the cattle to gather by thousands which aided us wonderfully in getting them started across. We were forced to carry our clothes and provisions on our heads while swimming. The water was very cold coming from the mountains. We got our cattle safe from the flood and in a good place for the winter. Another man by the name of Swazey now joined us. There were now three of us in camp with a good tent and our cattle up to their knees in clover.

Remarks: In company with my mother, my husband, and son, Samuel, we left New Orleans about the 20th of September 1853 for California. We stopped at Havana six days, then two days at Aspinwall and eleven days at Panama, when we took the Steamer Golden Gate for San Francisco. The day we arrived my brother William met us, and we accompanied him to Jones’ Bar, Nevada Co. where he had a mine with my brother John. My husband worked there with them until 1864 when we returned to S.F. and built our house on Stevenson St. between 7th and 8th where my daughter Maggie was born. I had a son, Will. J and a daughter Mary E. born in Nevada Co. We resided in S.F. until 1886 when we moved to Contra Costa Co. on a ranch, then moved to Byron where my husband died in 1893. Since his death I have moved about in Cal. and am now residing with my daughter Mrs. Crellay in Martinez. I joined the Association of Pioneer women of California, September 10, 1900 and am a Charter member. I am proud to be called a California and a Pioneer.