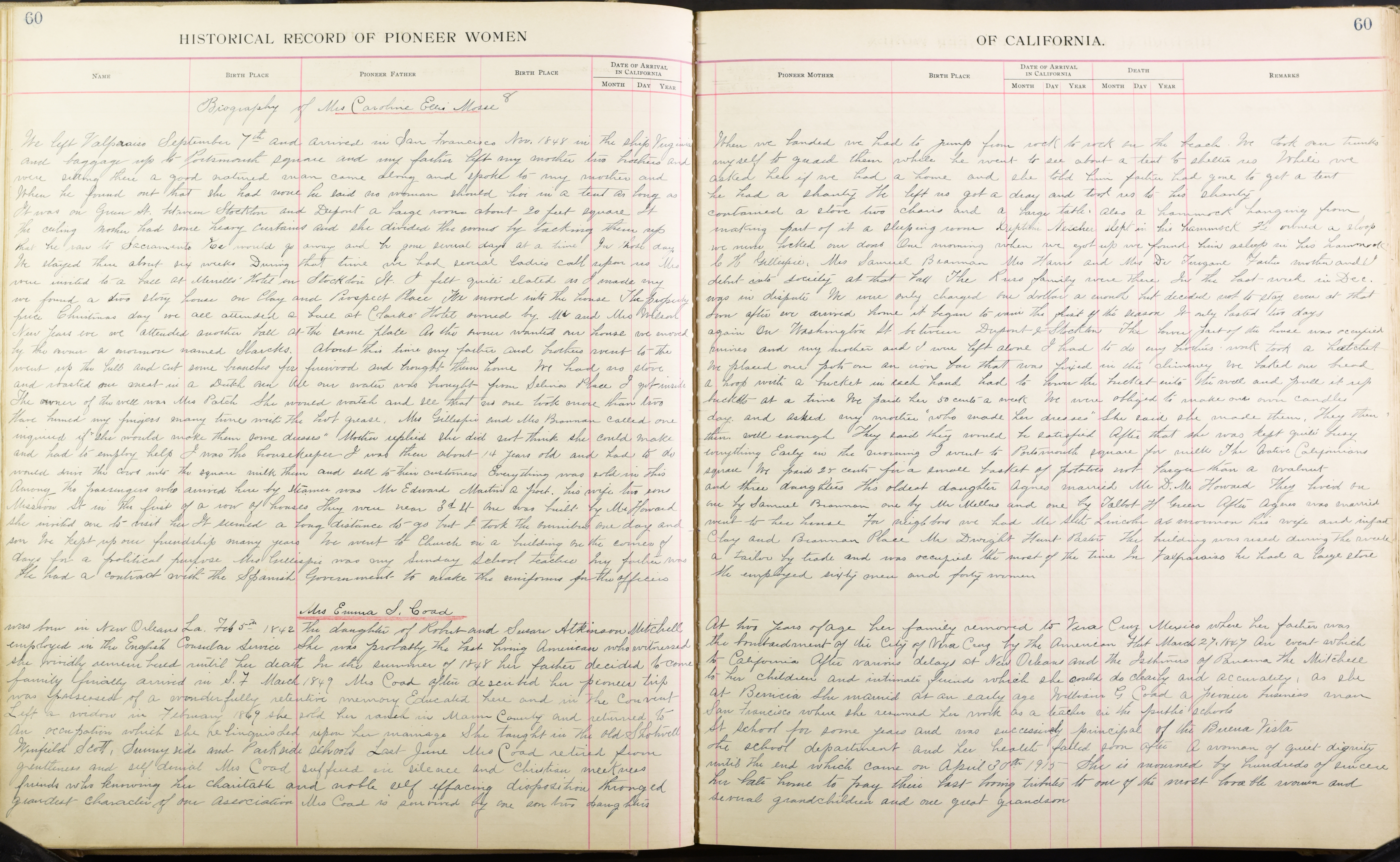 We left Valparaiso September 7th and arrived in San Francisco Nov. 1848 in the ship Virginia. When we landed we had to jump from rock to rock on the beach. We took our trunks and baggage up to Portsmouth Square and my father left my mother two brothers and myself to guard them while he went to see about a tent to shelter us. While we were sitting there a good natured man came along and spoke to my mother and asked her if we had a home and she told him father had gone to get a tent. When he found out that she had none he said no woman should live in a tent as long as he had a shanty. He left us got a dray and took us to his shanty. It was on Green St. between Stockton and Dupont. A large room about 20 feet square. It contained a stove two chairs and a large table. Also a hammock hanging from the ceiling. Mother had some heavy curtains and she divided the room by tacking them up making part of it a sleeping room. Captain Fletcher slept in his hammock. He owned a sloop that he ran to Sacramento. He would go away and be gone several days at a time. In those days we never locked our doors. One morning when we got up we found him asleep in his hammock. We stayed there about six weeks. During that time we had several ladies call upon us. Mrs. C.H. Gillespie, Mrs. Samuel Brannan, Mrs. Harris and Mrs. De Turgane. Father mother and I were invited to a ball at Merrill’s Hotel on Stockton St. I felt quite elated as I made my debut into society at that ball. The Russ family were there. In the last week in Dec. we found a two story house on Clay and Propsect Place. We moved into the house. The property was in dispute. We were only charged one dollar a month but decided not to stay even at that price. Christmas day we all attended a ball at Clarks’ Hotel owned by Mr. and Mrs. Wilson. Soon after we arrived home it began to rain the first of the season. It only lasted two days. New Years eve we attended another ball at the same place. As the owner wanted our house we moved again on Washington St. between Dupont & Stockton . The lower part of the house was occupied by the owner a mormon named Harcks. About this time my father and brothers went to the mines and my mother and I were left alone. I had to do my brother’s work took a hatchet went up the hill and cut some branches for firewood and brought them home. We had no stove. We placed our pots on an iron bar that was fixed in the chimney. We baked our bread and roasted our meat in a Dutch oven. All our water was brought from Selina Place. I got inside a hoop with a bucket in each hand. had to lower the bucket into the well and pull it up. The owner of the well was Mrs. Patch. She would watch and see that no one took more than two buckets – at a time. We paid her 50 cents a week. We were obliged to make our own candles. I have burned my fingers many times with the hot grease. Mrs. Gillespie and Mrs. Brannan called one day and asked my mother “who made her dresses”. She said she made them. They then inquired if “she would make them some dresses”. Mother replied she did not think she could make them well enough. They said they would be satisfied. After that she was kept quite busy and had to employ help. I was the housekeeper. I was then about 14 years old and had to do everything. Early in the morning I went to Portsmouth Square for milk. The Native Californians would drive the cows into the square milk them and sell to their customers. Everything was sold in this square. We paid 25 cents for a small basket of potatoes not larger than a walnut. Among the passengers who arrived here by Steamer was Mr. Edward Martin a port his wife two sons and three daughters. His oldest daughter Agnes married Mr. D. M. Howard. They lived on Mission St. in the first of a row of houses. They were near 3d St. One was built by Mr. Howard one by Samuel Brannan one by Mr. Mellus and one by Talbot H. Green. After Agnes was married she invited me to visit her. It seemed a long distance to go but I took the omnibus one day and went to her house. For neighbors we had Mr. Seth Lincoln a mormon his wife and infant son. We kept up our friendship many years. We went to Church in a building on the corner of Clay and Brannan Place Mr. Dwight Hunt Pastor. The building was used during the week days for a political purpose. Mrs. Gillespie was my Sunday School teacher. My father was a tailor by trade and was occupied the most of the time. In Valparaiso he had a large store. He had a contract with the Spanish Government to make the uniforms for the officers. We employed sixty men and forty women.

Was home in New Orleans La., Feb. 5th, 1842 the daughter of Robert and Susan Atkinson Mitchell. At two years of age her family removed to Vera Cruz Mexico where her father was employed in the English Consular Service. She was probably the last living American who witnessed the bombardment of the City of Vera Cruz by the American Fleet March 27, 1847. An event which she vividly remembered until her death. In the summer of 1848 her father decided to come to California. After various delays at New Orleans and the Isthmus of Panama. The Mitchell family finally arrived in S.F. March 1849. Mrs. Coad often described her pioneers trip to her children and intimate friends which she could do clearly and accurately. As she was possessed of a wonderfully retentive memory. Educated here and in the Convent at Bernicia. She married at an early age William G. Coad a pioneer business man. Left a widow in February 1869 she sold her ranch in Marin County and returned to San Francisco where she resumed her work as a teacher in the public schools. An occupation which she relinquished upon her marriage. She taught in the old Shotwell St. School for some years and was successively principal of the Buena Vista Winfield Scott, Sunnyside and Parkside Schools. Last June Mrs. Coad retired from the school department and her health failed soon after. A woman of quiet dignity gentleness and self denial Mrs. Coad suffered in silence and Christian meekness until the end which came on April 30th 1915. She is mourned by hundreds of sincere friends who knowing her charitable and noble self effacing disposition thronged her late home to pay their last loving tributes to one of the most lovable women and grandest character of our Association. Mrs. Coad is survived by one son two daughters several grandchildren and one great grandson.