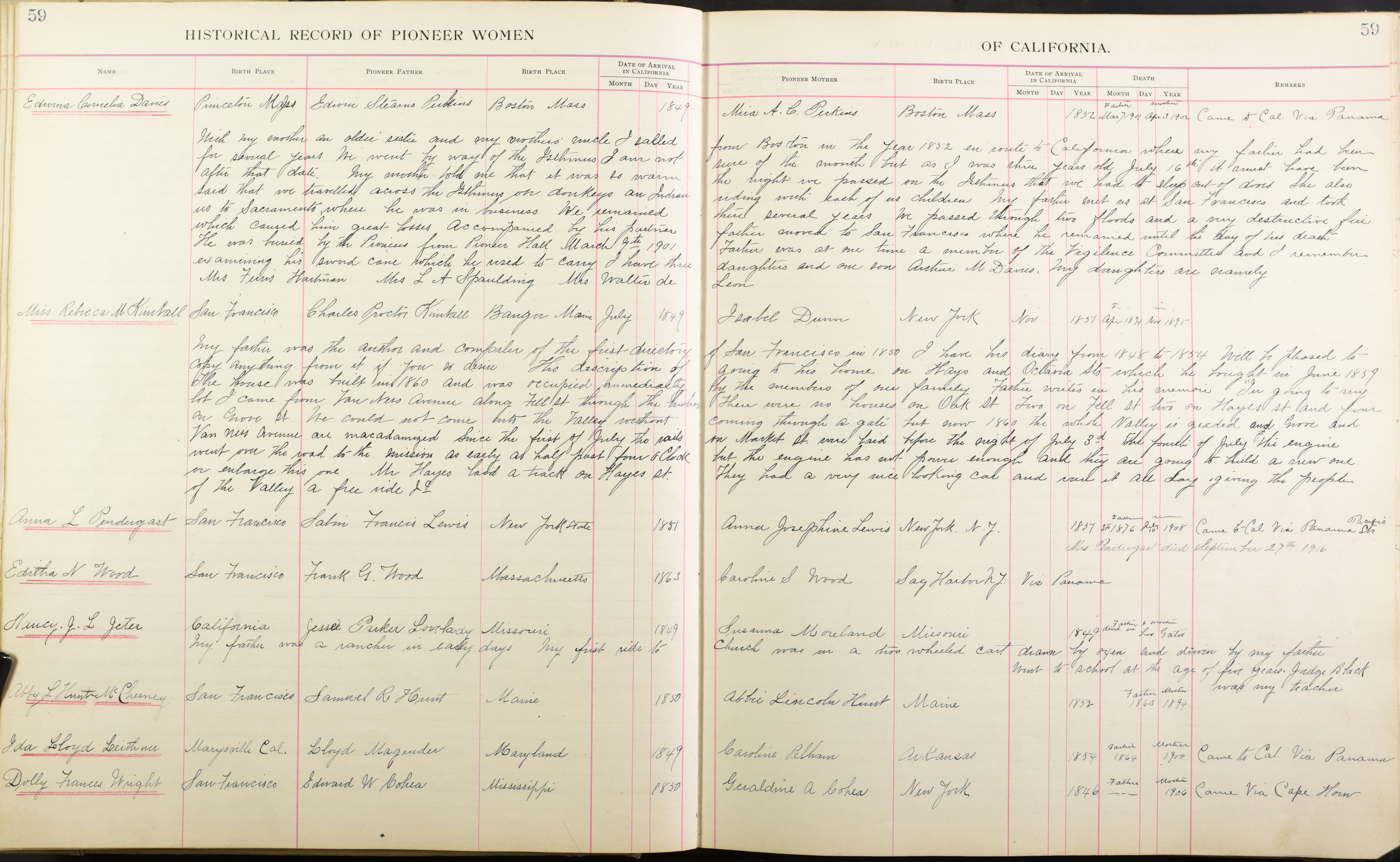 Remarks: Came to California via Panama. With my mother an older sister and my mothers uncle I sailed from Boston in the year 1852 en route to California where my father had been for several years. We went by way of the Isthmus I am not sure of the month but as I was three years old July 16th it must have been after that date. My mother told me that it was so warm the night we passed on the Isthmus that we had to sleep out-of doors. She also said that we traveled across the Isthmus on donkeys an Indian riding with each of us children. My father met us at San Francisco and took us to Sacramento where he was in business We remained there several years . We passed through two floods and a very destructive fire which caused him great losses. Accompanied by his partner father moved to San Francisco where he remained until the day of his death. He was buried by the Pioneers from Pioneer Hall March 7th, 1901. Father was at one time a member of the Vigilance Committee and I remember examining his sword cane which he used to carry. I have three daughters and one son Arthur M. Davis. My daughters are namely Mrs. Ferris Hartman Mrs. L. A. Spaulding Mrs. Walter de Leon

Remarks: My father was the author and compiler of the first directory of San Francisco in 1850. I have his diary from 1848- to 1854. Will be pleased to copy anything from it if your so desire. The description of going to his home on Hayes and Octavia Sts which he bought in June 1859. The house was built in 1860 and was occupied immediately by the members of our family. Father writes in his memoir, “I’m going to my lot. I came from Van Ness Avenue along Fell St. through the bushes. There were no houses on Oak St Two on Fell St two on Hayes St and four on Grove St. We could not come into The Valley without coming through a gate but now 1860 the whole Valley is graded and Grove and Van Ness Avenue are macadamized. Since the first of July the rails on Market St were laid before the night of July 3d. The fourth of July the engine went over the road to The Mission as early as half past four o’clock but the engine has not power enough and they are going to build a new one or enlarge this one. Mr. Hayes laid a track on Hayes St. They had a very nice looking car and ran it all day giving the people of The Valley a free ride.

Remarks: My father was a rancher in early days. My first ride to church was in a two wheeled cart drawn by oxen and driven by my father. Went to school at the age of five years. Judge Black was my teacher.

Remarks: Came to Cal. via Panama