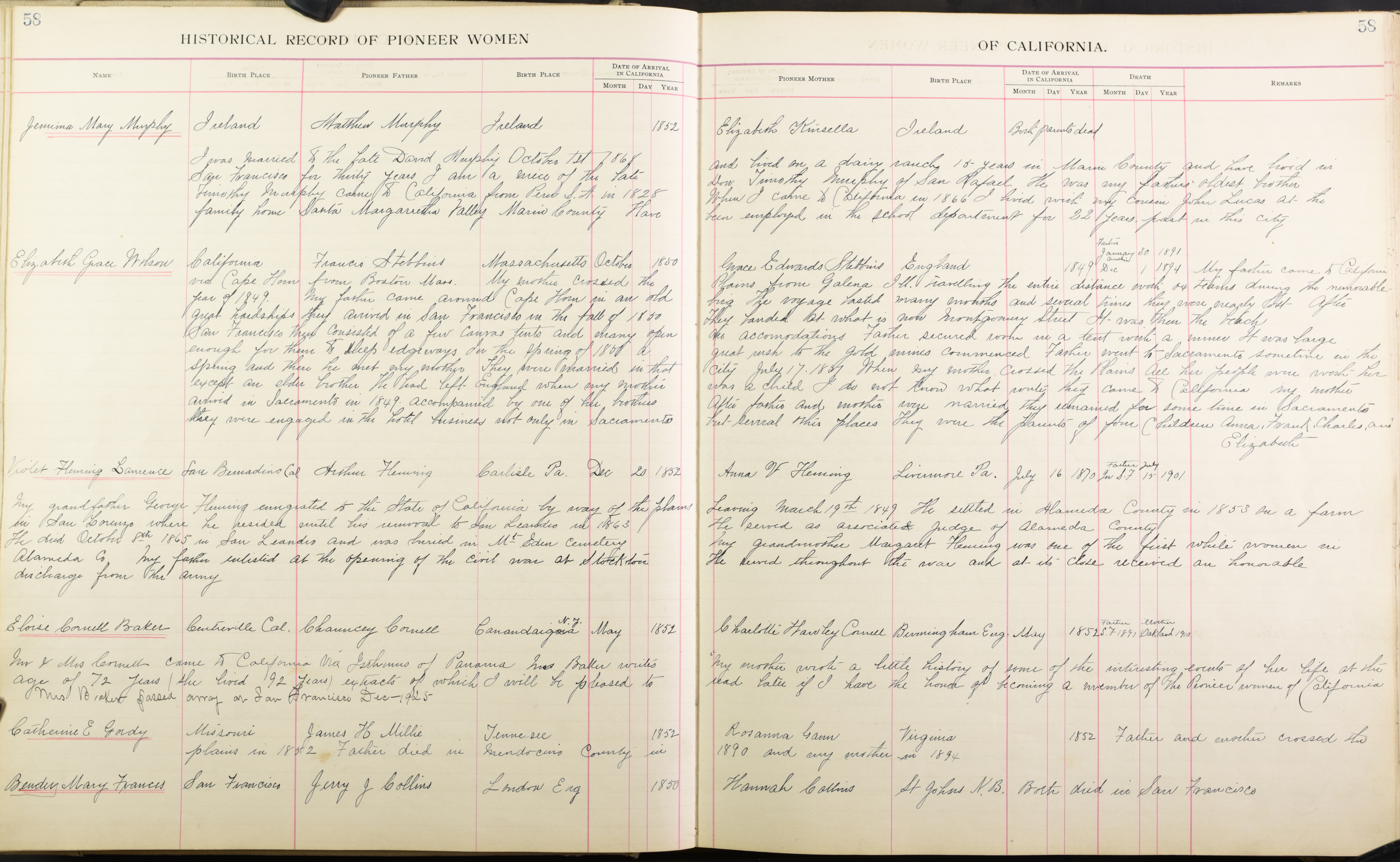 Remarks: I was married to the late David Murphy October 1st 1868 and lived on a dairy ranch 15 years in Marin County and have lived in San Francisco for thirty years. I am the niece of the late Don Timothy Murphy of San Rafael. He was my father’s oldest brother. Timothy Murphy came to California from Peru S.A. in 1828. When I came to California in 1866 I lived with my cousins John Lucas at the family home Santa Margarita Valley, Marin County. Have been employed in the school department for 22 years past in this city.

Remarks: My father came to California via Cape Horn from Boston, Mass. My mother crossed the plains from Galena, Ill. traveling the entire distance with ox teams during the memorable year of 1849. My father came around Cape Horn in an old Brig. The voyage lasted many months and several times they were nearly lost. After great hardship they arrived in San Francisco in the fall of 1850 they landed at what is now Montgomery Street. It was then the beach. San Francisco then consisted of a few canvas tents and many open accommodations. Father secured room in a tent with a miner. It was large enough for them to sleep edgeways. In the spring of 1850 a great rush of gold miners commenced. Father went to Sacramento sometime in the spring and then he met my mother. They were married in that city July 17th, 1857. When my mother crossed the plains all her people were with her except an older brother. He had left England when my mother was a child. I do not know what route they came to California. My mother arrived in Sacramento in 1849 accompanied by one of her brothers. After father and mother were married they remained for some time in Sacramento they were engaged in the hotel business not only in Sacramento but several places. They were the parents of four children, Anna, Frank, Charles, and Elizabeth.

Remarks: My grandfather George Fleming emigrated to the state of California by way of the plains, leaving March 19th, 1849. He settled in Alameda County in 1853 on a farm in San Lorenzo where he resided until his removal to San Leandro in 1863. He served as associate judge of Alameda County. He died October 8th, 1865 in San Leandro and was buried in Mt. Edna Cemetery. My grandmother Margret Fleming was one of the first white women in Alameda County. My father enlisted at the opening of the Civil War at Stockton. He served throughout the Civil War and at its close received an honorable discharge from the army.

Remarks: Mr. and Mrs. Cornell came to California via the Isthmus of Panama. Mrs. Baker writes “ My mother wrote a little history of some of the interesting events of her life at the age of 72 years ( she lived 92 years) extracts of which I will be pleased to read later if I have the honor of becoming a member of the Pioneer Women of California. Mrs. Baker passed away in San Francisco Dec. 1925.

Remarks: Father and Mother crossed the plains in 1852. Father died in Mendocino County in 1890 and my Mother in 1894.