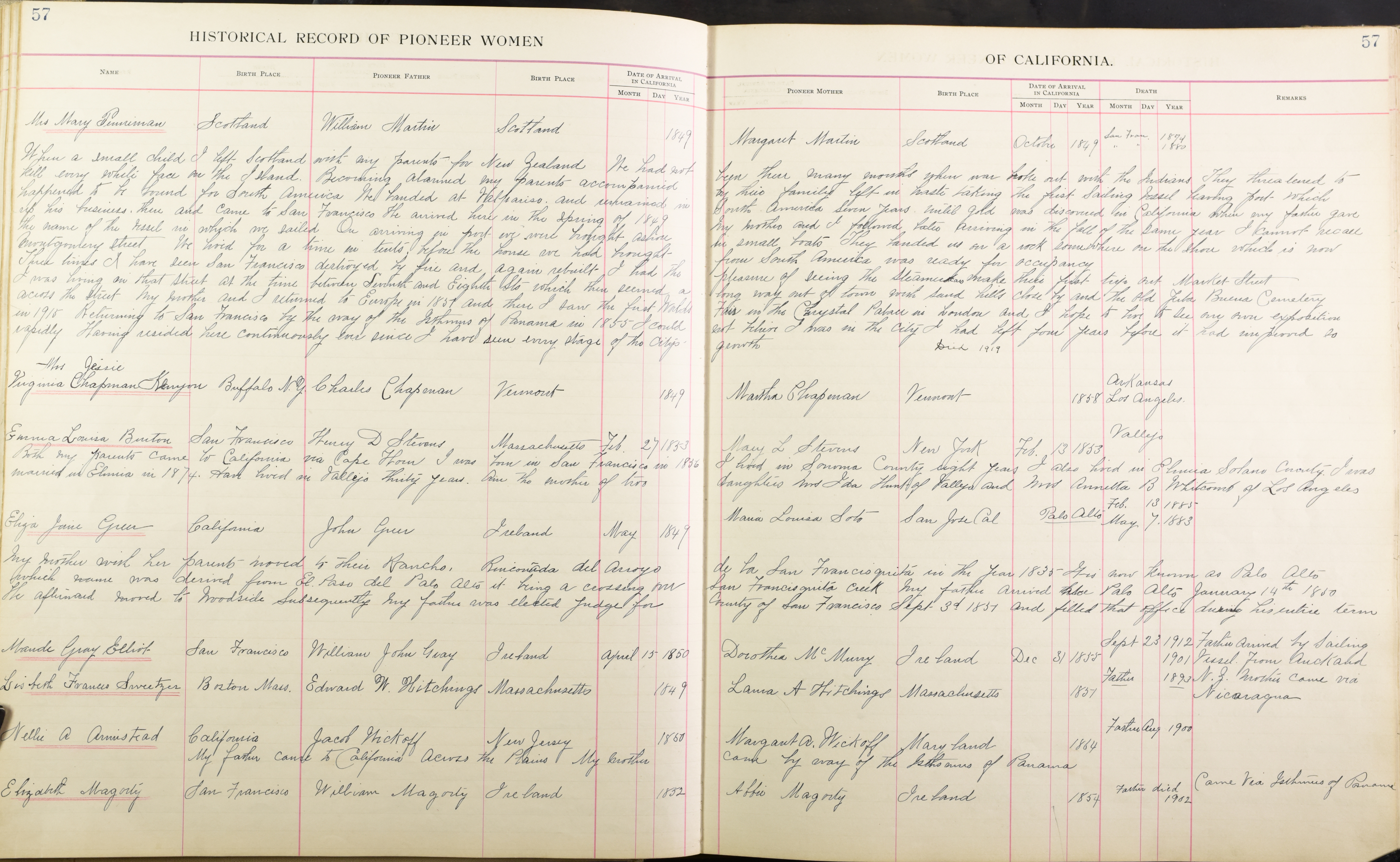 Remarks: When a small child I left Scotland with my parents for New Zealand. We had not been there many moths when war broke out with the Indians. They threatened to kill every white face on the Island. Becoming alarmed my parents, accompanied by their family left in hast taking the first sailing vessel leaving port which happened to be bound for South America. We landed at Valparaiso and remained in South America seven years until god was discovered in California when my father gave up his business and came to San Francisco. He arrived in the spring of 1849. My mother and I followed later arriving in the fall of the same year. I can not recall the name of the vessel on which we sailed. On arriving in port we were brought ashore in small boats. They landed us on a dock somewhere on the shore which is now Montgomery Street. We lived for a time in tents before the house we had bought from South America was ready for occupancy. Three times I have seen San Francisco destroyed by fire and again rebuilt. I had the pleasure of seeing steam cars make their first trip out Market Street. I was living on that street at that time between Seventh and Eighth St’s, which then seemed a long way out of town Sand hills close by and the old Yerba Buena Cemetery across the street. My mother and I returned to Europe in 1857 and there I saw the first World’s Fair in the Crystal Palace in London and I hope to live to see our own exposition in 1915. Returning to San Francisco by the way of the Isthmus of Panama in 1855 I could not believe I was in the city I had left from years before it had improved so rapidly. Having resided here continuously ever since. I have seen every stage of the cities growth.

Remarks: My mother with her parents moved to their Rancho, Rinconada del Arroyo de la San Francisquito in the year 1835–is now known as Palo Alto which name was derived from El Paso del Palo Alto it being a crossing near San Francisquito creek. My father arrived for Palo Alto January 14, 1850. He afterward moved to Woodside. Subsequently, my father was elected judge for County of San Francisco Sept. 3, 1854 and filled that office during his entire term.

Remarks: My father came to California across the plains. My brother came by way of the Isthmus of Panama.

Remarks: Came via Isthmus of Panama