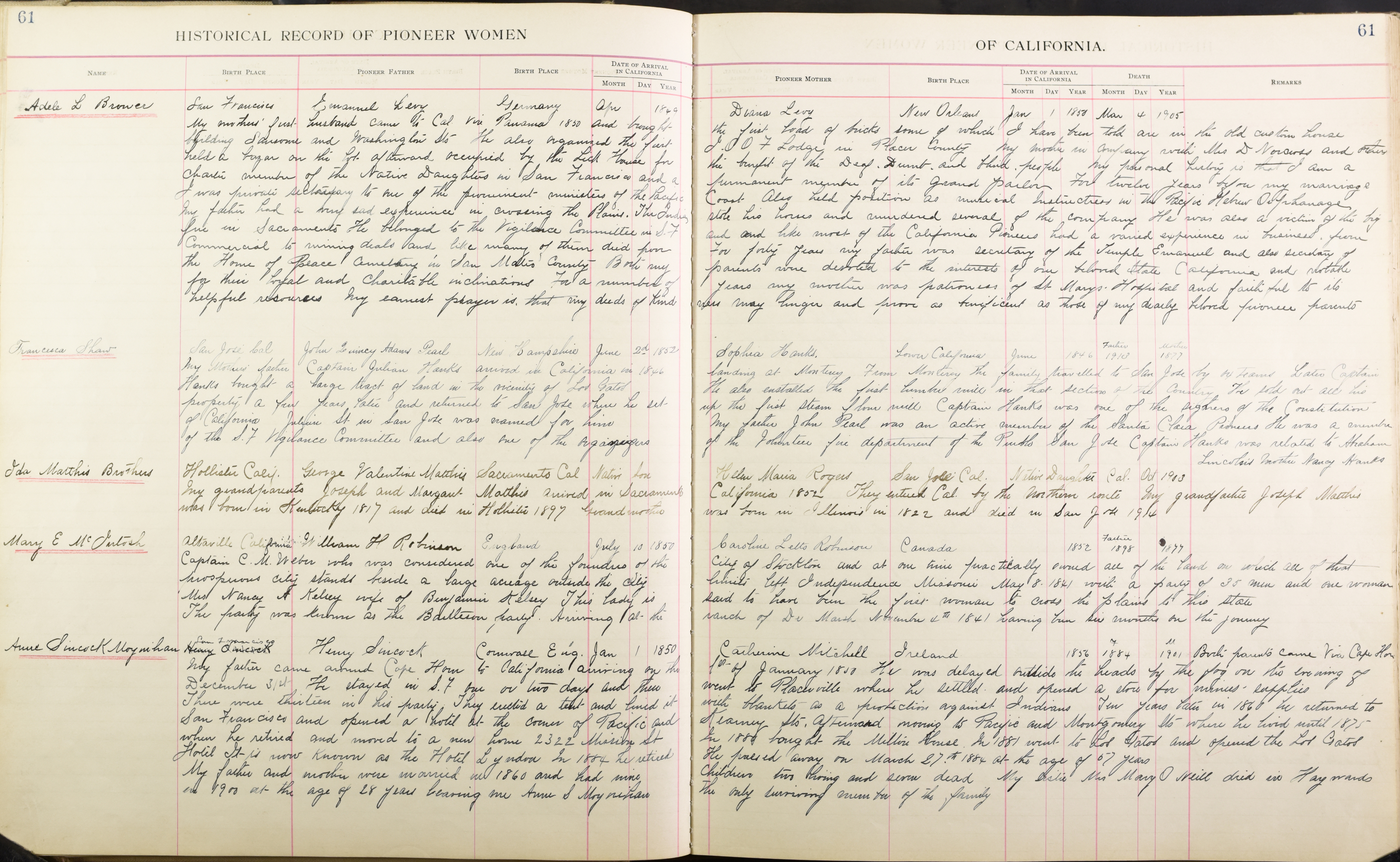 Remarks: My mothers’ first husband came to Cal. via Panama 1850 and brought the first load of bricks some of which I have been told are in the old Custom House building Sansome and Washington Sts. He also organized the first I.O.O.F. Lodge in Placer County. My mother in January with Mrs. D. Norcross and others held a bazar on the St. afterward occupied by the Lick House for the benefit of the Deaf, Dumb, and Blind people. My personal history is that I am a charter member of the Native Daughters in San Francisco and a permanent member of its Grand Parlor. For twelve years before my marriage I was private secretary to one of the prominent ministers of the Pacific Coast. Also held position as musical Instructress in the Pacific Hebrew Orphanage. My father had a very sad experience in crossing the Plains. The Indians stole his horses and murdered several of the company. He was also a victim of the big fire in Sacramento. He belonged to the Vigilance Committee in SF. and like most of the California Pioneers had a varied experience in business from Commercial to mining deals and like many of them did poor. For forty years my father was secretary of the Temple Emanuel and also secretary of the Home of Peace Cemetery in San Mateo County. Both my parents were devoted to the interests of our beloved State California and notable for their loyal and charitable inclinations. For a number of years my mother was patroness of St. Marys Hospital and faithful to its helpful resources. My earnest prayer is that my deeds of kindness may linger and prove as beneficent as those of my dearly beloved pioneer parents.

Remarks: My Mother’s father Captain Julian Hanks arrived in California in 1846 landing at Monterey. From Monterey the family travelled to San Jose by ox teams. Later Captain Hanks bought a large tract of land in the vicinity of Los Gatos. He also enstalled [sic] the first lumber mill in that section of the Country. He sold out all his property a few years later and returned to San jose where he set up the first steam flour mill. Captain Hanks was one of the signers of the Constitution of California. Julian St. in San Jose was named for him. My father John Pearl was an active member of the Santa Clara Pioneers. He was a member of the S.F. Vigilance Committee and also one of the organizers of the Volunteer fire department of the Pueblo San Jose. Captain Hanks was related to Abraham Lincoln his mother, Nancy Hanks.

Remarks: My grandparents Joseph and Margaret Matthis arrived in Sacramento California 1852. They entered Cal. by the Northern route. My grandfather Joseph Matthis was born in Kentucky 1817 and died in Hollister 1897. Grandmother was born in Illinois in 1822 and died in San Jose 1914.

Remarks: Captain C.M. Weber who was considered one of the founders of the City of Stockton and at one time practically owned all of the land on which all of that prosperous city stands beside a large acreage outside the city limits, left Independence Missouri May 8, 1841 with a party of 35 men and one woman, Mrs. Nancy A. Kelsey wife of Benjamin Kelsey. This lady is said to have been the first woman to cross the plains to this state. The party was known as the Bartleson party. Arriving at the ranch of Dr. Marsh November 4th 1841 having been six months on the journey.

My father came around Cape Horn to California arriving on the 1st of January 1850. He was delayed outside the heads by the fog on the evening of December 31st. He stayed in S.F. one or two days and then went to Placerville where he settled and opened a store for miners supplies. There were thirteen in his party. They erected a tent and lived it with blankets a s a protection against Indians. Ten years later in 1860 he returned to San Francisco and opened a hotel at the corner of Pacific and Kearney Sts. Afterward moving to Pacific and Montgomery. It’s where he lived until 1875 when he retired and moved to a new home 2322 Mission St. In 1888 bought the Millon House. In 1881 went to Los Gatos and opened the Los Gatos Hotel. It is now known as the Hotel Lyndon. In 1884 he retired. He passed away on March 27th 1884 at the age of 57 years. My father and mother were married in 1860 and had nine children, two living and seven dead. My sister Mrs. Mary O’Neill died in Haywards in 1900 at the age of 28 years bearing me Anne S. Moynihan, the only surviving member of the family.