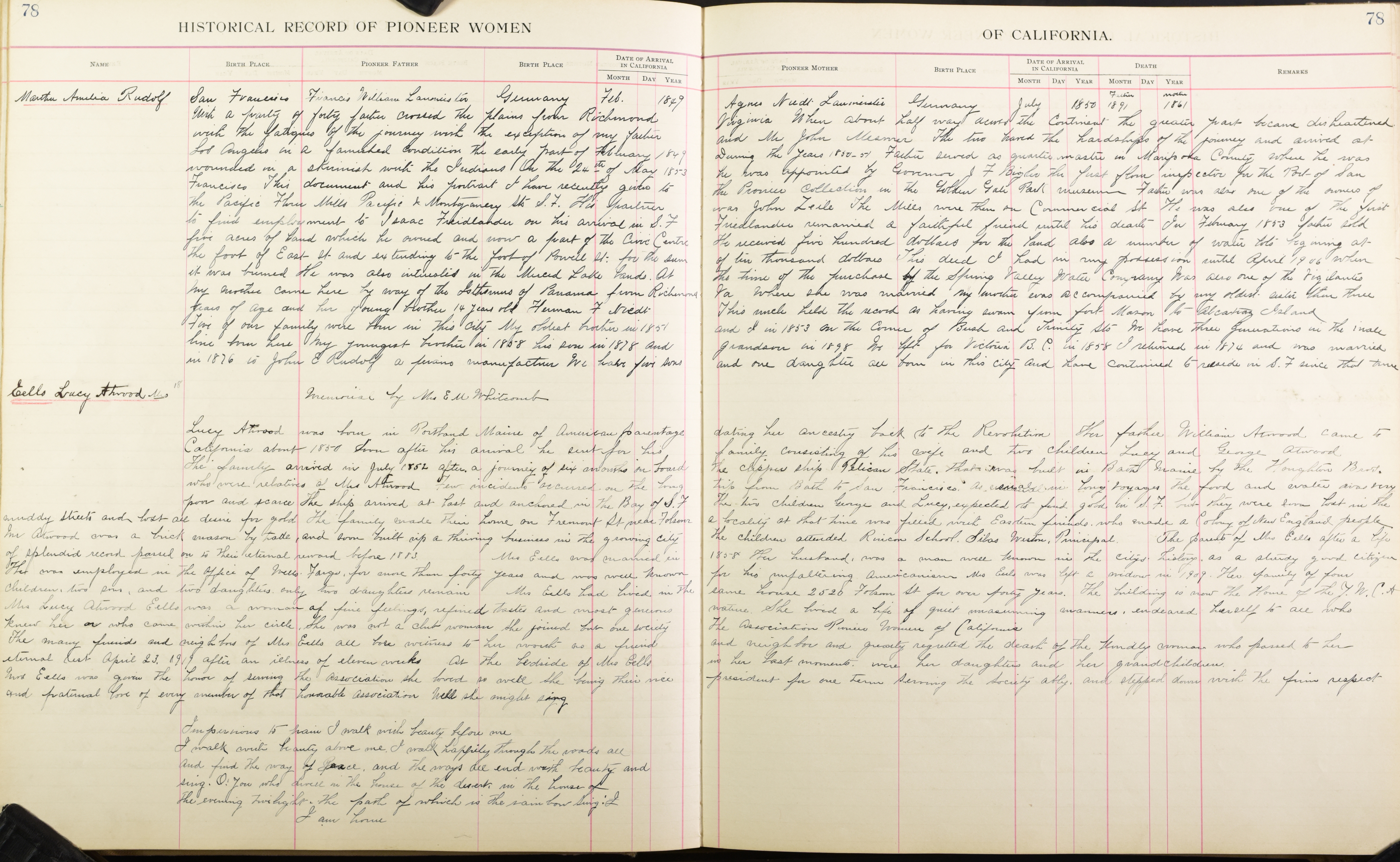 Remarks: With a party of forty father crossed the plains from Richmond Virginia.  When about half way across the Continent the greater part became disheartened with the fatigues of the journey with the exception of my father and Mr. John Mesmer.  The two braved the hardships of the journey and arrived at Los Angeles in a famished condition the early part of February 1849.  During the years 1850-51 Father served as quarter master in Mariposa County where he was wounded in a skirmish with the Indians.  On the 24th of May 1853 he was appointed by Governor J.F. Bigler the first flour inspector for the Port of San Francisco.  This document and his portrait I have recently gives to the Pioneer Collection in the Golden Gate Park Museum. Father was also one of the owners of the Pacific Flour Mills Pacific & Montgomery Sts S.F.  His partner was John Zeile. The Mills were then on Commercial St.  He was also one of the first to find acres of land which he owned and now a part of the Civic Centre. He received five hundred dollars for the land also a number of water lots beginning at the foot of East St and extending to the foot of Powell St. for the sum of ten thousand dollars. This deed I had in my possession until April 1906 when it was burned  He was also interested in the Merced Lake Lands.  The time of the purchase by the Spring Valley Water Company Was also one of the Vigilantes. My mother came here by way of the Isthmus of Panama from Richmond Va.  where she was married. My mother was accompanied by my oldest sister then three years of age and her young brother 14 years old  Herman F. Niedt. This uncle held the record as having swam from fort-Mason to Alcatraz Island. Five of our family were born in this City.  My oldest brother in 1851 and I in 1853 on the corner of Bush and Trinity Sts. We have three generations in the male line born here. My youngest brother in 1858 his son in 1878 and grandson in 1898.  We left for Victoria B.C. in 1858  I returned in 1874 and was married in 1876 to John E. Rudolf a piano manufacturer.  We have five sons and one daughter all born in this city and have continued to reside in S.F. since that time

Lucy Atwood was born in Portland Maine of American parentage dating her ancestry back to the Revolution.  Her father William Atwood came to California about 1850.  Soon after his arrival he sent for his family consisting of his wife and two children Lucy and George Atwood.  The family arrived in July 1852 after a journey of six months on board the clipper ship Pelican State. That was build in Bath Maine by the Houghton Bros. who were relatives of Mrs. Atwood.  Few incidents occurred on the long trip from Bath to San Francisco. As usual in long voyages the food and water was very poor and scarce. The ship arrived at last and anchored in The Bay of S.F.  The two children George and Lucy, expected to find gold in S.F. but they were soon lost in the muddy streets and lost all desire for gold.  The family made their home on Fremont St. near Folsom a locality at that time was filled with Eastern friends who made a Colony of New England people.  Mr. Atwood was a brick mason by trade, and soon built up a thriving business in the growing city. The children attended Rincon School Silas Weston, Principal.  The parents of Mrs. Eells after a life of splendid record passed on to their eternal reward before 1883. Mrs. Eells was married in 1858.   Her husband was a man well known in the city’s history as a sturdy good citizen.  He was employed in The Office of Wells Fargo, for more than forty years and was well known for his unfaltering
Americanism.  Mrs. Eells was left a widow in 1909. Her family of four children, two sons, and two daughters only two daughters remain.  Mrs. Eells had lived in the same house 22520 Folsom St for over forty years.  The building is now The Home of the Y.W.C.A.  Mrs. Lucy Atwood Eels was a woman of fine feelings, refined tastes and most generous nature.  She lived a life of quiet unassuming manners, endeared herself to all who knew her or who came within her circle.  She was not a club woman.  She joined but one society  The Association Pioneer Women of California. The many friends and neighbors of Mrs. Eells all bore witness to her worth as a friend and neighbor and greatly regretted the death of the kindly woman who passed to her eternal rest April 23, 1919 after an illness of eleven weeks.  At the bedside of Mrs. Eells in her last moments were her daughters and her grandchildren.  Mrs. Eells was given the honor of serving the Association she loved so well.  She being their vice president for one term.  Serving the Society ably.  And stepped down with the firm respect ad fraternal love of very member of that honorable Association Well she might sing