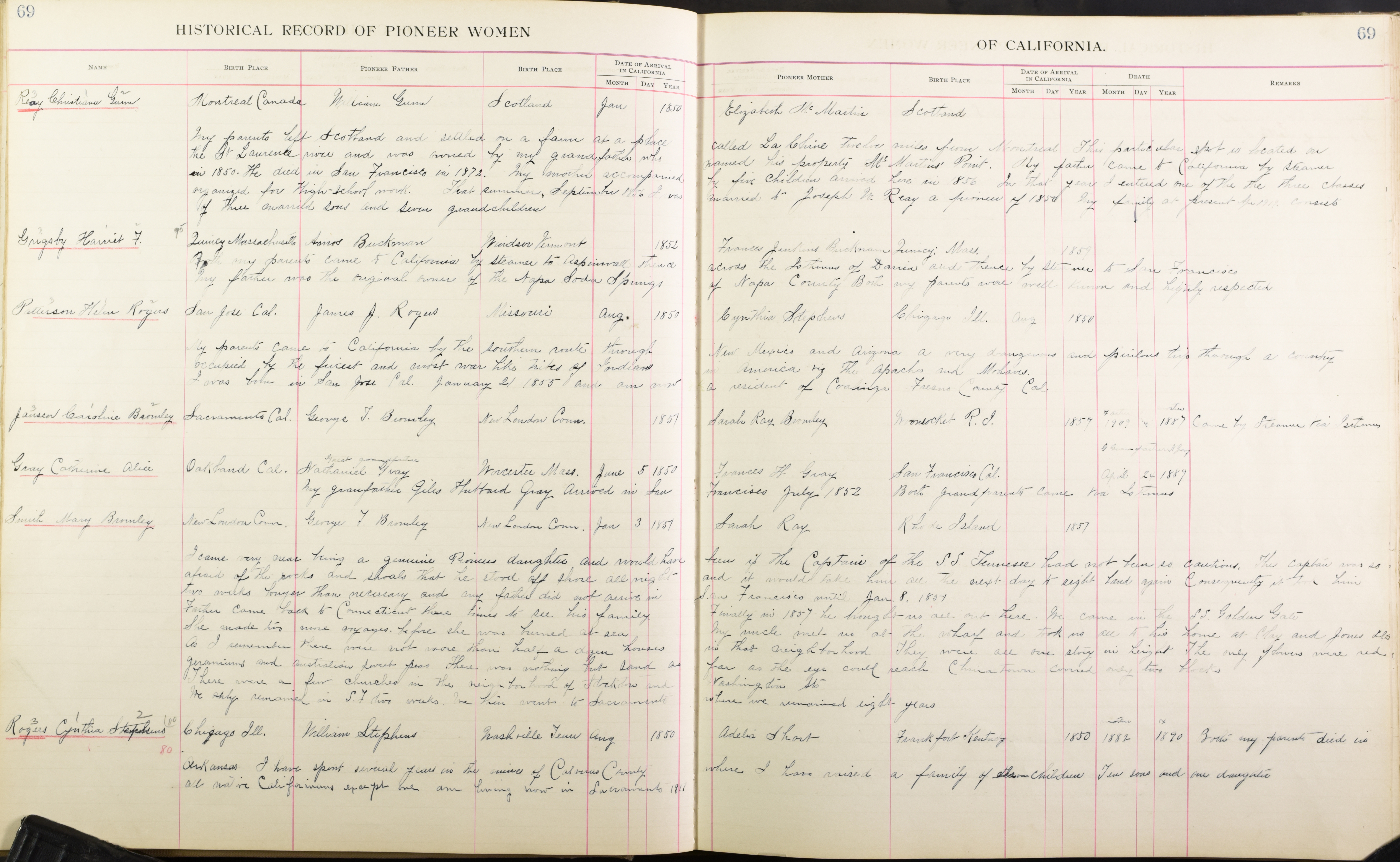 Remarks: My parents left Scotland and settled on a farm at a place called La Chine twelve miles from Montreal. This particular spot is located on the St. Lawrence river and was owned by my grandfather who named his property St. Martins’ Point. My father came to California by Steamer in 1850. He died in San Francisco in 1872. My mother accompanied by five children arrived here in 1856. In that year I entered one of the three classes organized for High-school work. That summer, September 1856 I was married to Joseph W. Reay a pioneer of 1850. My family at present sept. 1919 consists of three married sons and seven grandchildren.

Remarks: Both my parents came to California by Steamer to Aspinwall thence across the Isthmus of Darien and thence by steamer to San Francisco. My father was the original owner of the Napa Soda Springs of Napa County. Both my parents were well known and highly respected

Remarks: My parents came to California by the southern route through New Mexico and Arizona a very dangerous and perilous trip through a country Occupied by the fiercest and most war like Tribes of Indians in American by the Apaches and Mohaves. I was born in San Jose Cal. January 21, 1855 and am now a resident of Coalinga Fresno County Cal.

Remarks: Came by Steamer via Isthmus

Remarks: I came very near being a genuine Pioneers daughter and would have been if the Captain of the S.S. Tennessee had not been so cautious. The captain was so afraid of the rocks and shoals that he stood off shore all night and it would take him all the next day to sight land again. Consequently it took him two weeks longer than necessary and any father did not arrive in San Francisco until Jan. 8, 1851. Father came back to Connecticut three times to see his family. Finally in 1857 he brought us all out here. We came in the S.S. Golden Gate. She made two more voyages before she was burned at sea. My uncle met us at the wharf and took us all to his home at Clay and Jones Sts.  As I remember there were not more than half a dozen houses in that neighborhood. They were all one story in height. The only flowers were red geraniums and Australian sweet peas. There was nothing but sand as far as the eye could reach. Chinatown covered only two blocks. There were a few churches in the neighborhood of Stockton and Washington Sts. We only remained in S.F. two weeks. We then went to Sacramento where we remained eight years.

Remarks: Arkansas. I have spent several years in the mines of Calaveras County where I have raised a family of eleven children. Ten sons and one daughter. All native Californians except me, am living now in Sacramento, 1911.