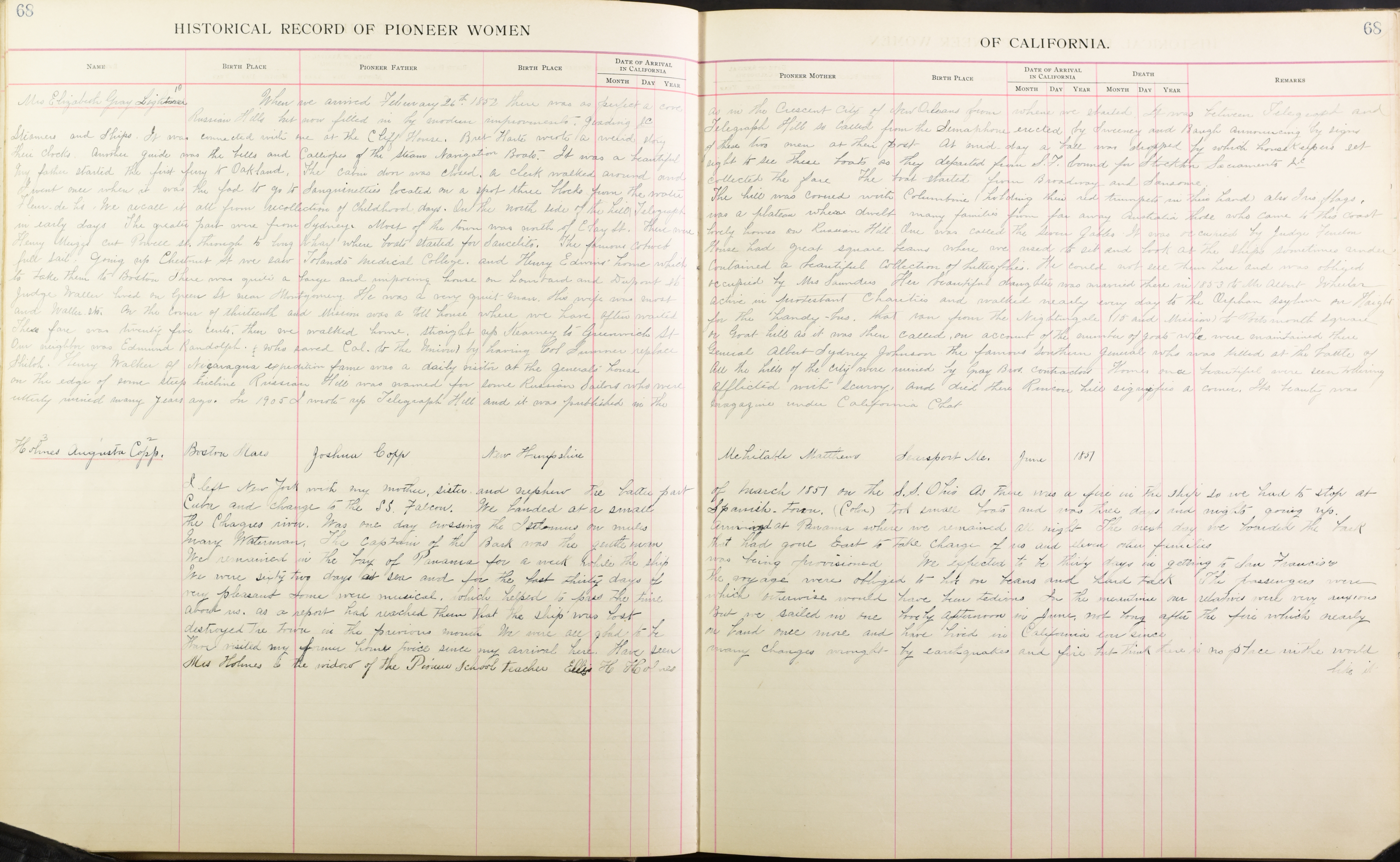 When we arrived February 26th, 1852, there was a perfect alcove as in the Crescent City of New Orleans from where we started. It was between Telegraph and Russian Hills but now filled in by modern improvements. Grading & Telegraph Hill so called from the Semaphore erected by Sweeney and Baugh announcing by signs Steamers and Ships. It was connected with one at The Cliff House. Bret Harte wrote a weird story of these two men at their post. At mid-day a ball was dropped by which house keepers set their clocks. Another guide was the bells and Calliopes of the Steam Navigation Boats. It was a beautiful sight to see these boats as they departed from S.F. bound for Stockton Sacramento etc.  My father started the first ferry to Oakland. The cabin door was closed, a clerk walked around and collected fare. The boat started from Broadway and Sansome. I went once when it was the fad to go to Sanguinetties located on a spot three blocks from the water. The hill was covered with Columbine, holding their red trumpets in their hand, also Iris flags, Fleur-de-Lis. We recall it all from recollection of childhood days. On the north side of the gills, Telegraph was a plateau where dwelt many families from far away Australia those who came to this coast in early days. The greater part were from Sydney. Most of the town was north of Clay St. There were lovely homes on Russian Hill. One was called the Seven Gables. It was occupied by Judge Fendon  Henry Meiggs cut Powell St. through to Long Wharf where boats started for Saucelito. The famous cobweb House had great square beams where we used to sit and look at the Ships sometimes under full sail. Going up Chestnut St. we saw Tolands’ Medical College. And Henry Edwins’ home which contained a beautiful Collection of butterflies. He could not sell [illegible] them here and was obliged to take them to Boston. There was quite a large and imposing house on Lombard and Dupont. Its occupied by Mrs. Saunders. Her beautiful daughter was married there in 1853 to Mr. Albert Wheeler. Judge Waller lived on Green St near Montgomery. He was a very quiet-man. His wife was most active in protestant Charities and walked n early every day to the Orphan Asylum on Haight. The fare was twenty five cents, then we walked home, straight up Kearny to Greenwich St. Our neighbor was Edmund Randolph. Who saved Cal. To the Miwok by having Col. Sumner replace General Albert Sydney Johnson the famous southern General who was killed at the battle of Shiloh. Henry Walker of Nicaragua expedition fame was a daily visitor at the Generals’ house. All the hills of the city were ruined by Gray Bros. contractors. Homes once beautiful were seen tottering on the edge of some steep incline. Russian Hill was named for some Russian sailors who were afflicted with scurvy, and died there. Rincon Hill signifies a corner. Its beauty was utterly ruined many years ago. In 1905 I walked up Telegraph Hill and it was published in the magazine under California Chat.

Remarks: I left New York with my mother, sister, and nephew the latter part of March 1851 on the S.S. Ohio. As there was a fire in the ship so we had to stop at Cuba and Change to the S.S. Falcon. We landed at a small Spanish town. (Colon) took small boats and was three days and nights going up The Chagres river. Was one day crossing the Isthmus on mules. Arrived at Panama where we remained all night. The next day we boarded the bark Mary Waterman. The Captain of the Bark was the gentleman that had gone East to take charge of us and eleven other families. We remained in the bay of Panama for a week while the ship was being provisioned. We expected to be thirty days in getting to San Francisco. We were sixty-two days at sea and for the last thirty days of the voyage were obliged to live on beans and hard tack . The passengers were very pleasant. Some were musical, which helped to pass the time which otherwise would have been tedious. In the meantime our relatives were very anxious about us as a report had reached them that the ship was lost. But we sailed in one lovely afternoon in June not long after the fire which nearly destroyed the town in the previous month. We were all glad to be on hand once more and have lived in California ever since. Have visited my former house twice since my arrival here. Have seen many changes wrought by earthquakes and fire but think there is no place in the world like it.

Mrs. Holmes is the widow of the Pioneer School teacher Ellis H. Holmes.