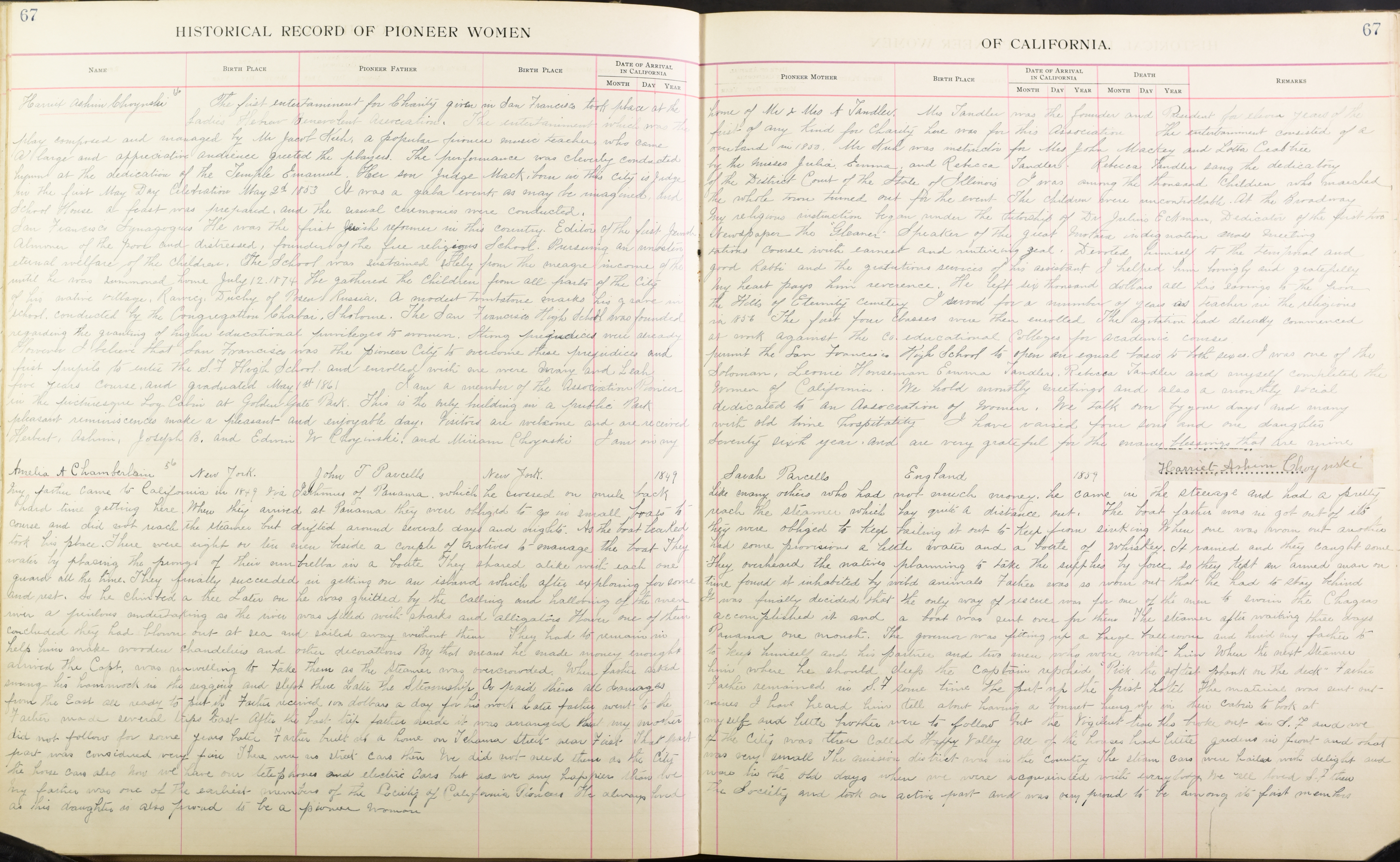 The first entertainment for Charity given in San Francisco took place at the home of Mr. & Mrs. A. Sandler.  Mrs. Sandler was the founder and President for eleven years of the Ladies Hebrew Benevolent Association. The entertainment which was the first of any kind for Charity here was for this Association. The entertainment consisted of a play composed and arranged by Mr. Jacob Kuh, a popular pioneer music teacher who came overland in 1850.  Mr. Kuh was instructor for Mrs. John Mackey and Lotta Crabtree. A large and appreciative audience greeted the players. The performance was cleverly conducted by the Misses Julia, Emma, and Rebecca Sandler. Rebecca Sandler sang the dedicatory hymn at the dedication of the Temple Emanuel. Her son Judge Mack, born in this city is Judge of the District Court of the State of Illinois. I was among the thousand children who marched in the first May Day Celebration May 2d, 1853. It was a gala event, as may be imagined, and the whole town turned out for the event. The children were uncontrollable. At the Broadway School House a feast was prepared, and the usual ceremonies were conducted. My religious instruction began under the tutorship of Dr. Julius Eckman, Dedicator of the first two San Francisco Synagogues. He was the first Jewish reformer in this country. Editor of the first Jewish Newspaper, the “Gleaner”. Speaker of the great Inotain Indignation mass meeting, [illegible] Of the poor and distressed, founder of the free religious School. Pursuing an unostentatious course with earnest and untiring zeal.  Devoted himself to the beneficial and eternal welfare of the Children. The School was sustained solely from the meager income of the good Rabbi and the gratuitous services of his assistant I helped him lovingly and gratefully until he was summoned home July 12, 1874. He gathered the children from all parts of the City. My heart pays him reverence. He left six thousand dollars all his earnings to the [illegible] of his native village, Rawicj duchy of Posen Russia. A modest tombstone marks his grave on the Hills of Eternity Cemetery. I served for a number of years as teacher in the religious school conducted by the Congregation Chabai, Sholome. The San Francisco High School was founded in 1856. The first four classes were then enrolled. The agitation had already commenced regarding the granting of higher educational privileges to women. Strong prejudices were already at work against the co-educational College for Academic courses. However I believe that San Francisco was the pioneer City to overcome these prejudices and permit the San Francisco High School to open an equal basis to both sexes. I was one of the first  pupils to enter the S.F. High School and enrolled with me were Mary and Leah Soloman, Leonie Houseman, Emma Sandler, Rebecca Sandler and myself completed the five years course, and graduated May 1st, 1861. I am a member of the Association of Pioneer Women of California. We hold monthly meetings and also a monthly social in the picturesque Log Cabin at Golden Gate Park. This is the only building in a public Park dedicated to an Association of Women. We talk over bygone days and many pleasant reminiscences make a pleasant and enjoyable day. Visitors are welcome and are received with old time hospitality. I have raised four sons and one daughter, Herbert, Ashim, Jospeh B. and Edwin W. Choynski, and Miriam Choynski. I am in my seventy-sixth year and are very grateful for the many blessings that are mine.

Remarks: My father came to California in 1849 via Isthmus of Panama, which he crossed on mule back Like many others who had not much money, he came in the steerage and had a pretty hard time getting here. Whey they arrived at Panama, they were obliged to go in small boats to reach the steamer which lay quite a distance out. The boat father was in got out of its course and did not reach the steamer but drifted around several days and nights. As the boat leaked they were obliged to keep sailing it out to keep from sinking. When one was worn out another took his place. There were eight or ten men beside a couple of natives to manage the boat. They had some provisions a little water and a boate [sic] Whiskey. It rained and they caught some water by placing the prongs of their umbrella in a boate. They shared alike with each one. They overheard the natives planning to take the supplies by force so they kept an armed man on guard all the time. They finally succeeded in getting on an island which after exploring for some time found it inhabited by wild animals. Father was so worn out that he had to stay behind and rest. So he climbed a tree. Later on he was guided by the calling and hallowing of the men. It was finally decided that the only way of rescue was for one of the men to swim the Chagres river a perilous undertaking as the river was filled with sharks and alligators. However one of them accomplished it and a boat was sent over for them. The steamer after waiting three days concluded they had blown out at sea and sailed away without them. They had to remain in Panama one month. The governor was fitting up a huge ballroom and hired my father to help him make wooden chandeliers and other decorations. By that means he made money enough to keep himself and his partner and two men who were with him. When the next Steamer arrived The Capt. Was unwilling to take them as the Steamer was overcrowded. When father asked him where he should keep the Captain replied, “Pick the softest plants on the deck. Father swung his hammock in the rigging and slept there. Later the Steamship Co. paid him all damages. Father remained in S.F. some time. He put up the first hotel. The material was sent out from the East all ready to put in Father received 100 dollars a day for his work.  Later father went to the mines I have heard him tell about having a bonnet hung up in their cabin to look at Father made several trips East. After the last trip father made it was arranged that my mother, myself and little brother were to follow But the Vigilent [sic] time this broke out in S.F. and we did not follow for some years later. Father built us a home on Tehama Street – near First. That part of the City was then called Happy Valley. All of the houses had little gardens in front and on part was considered very fine. There were to street cars then. We did not need them as the City was very small. The mission district was in the country. The steam cars were hailed with delight and the horse cars also. now we have our telephones and electric cars but are we any happier than we were in the old days when we were acquainted with everybody. We all loved S.F. then. My father was one of the earliest members of the Society of California Pioneers. He always loved the Society and took a active part and was very proud to be among its first members as his daughter as also proud to be a pioneer woman.