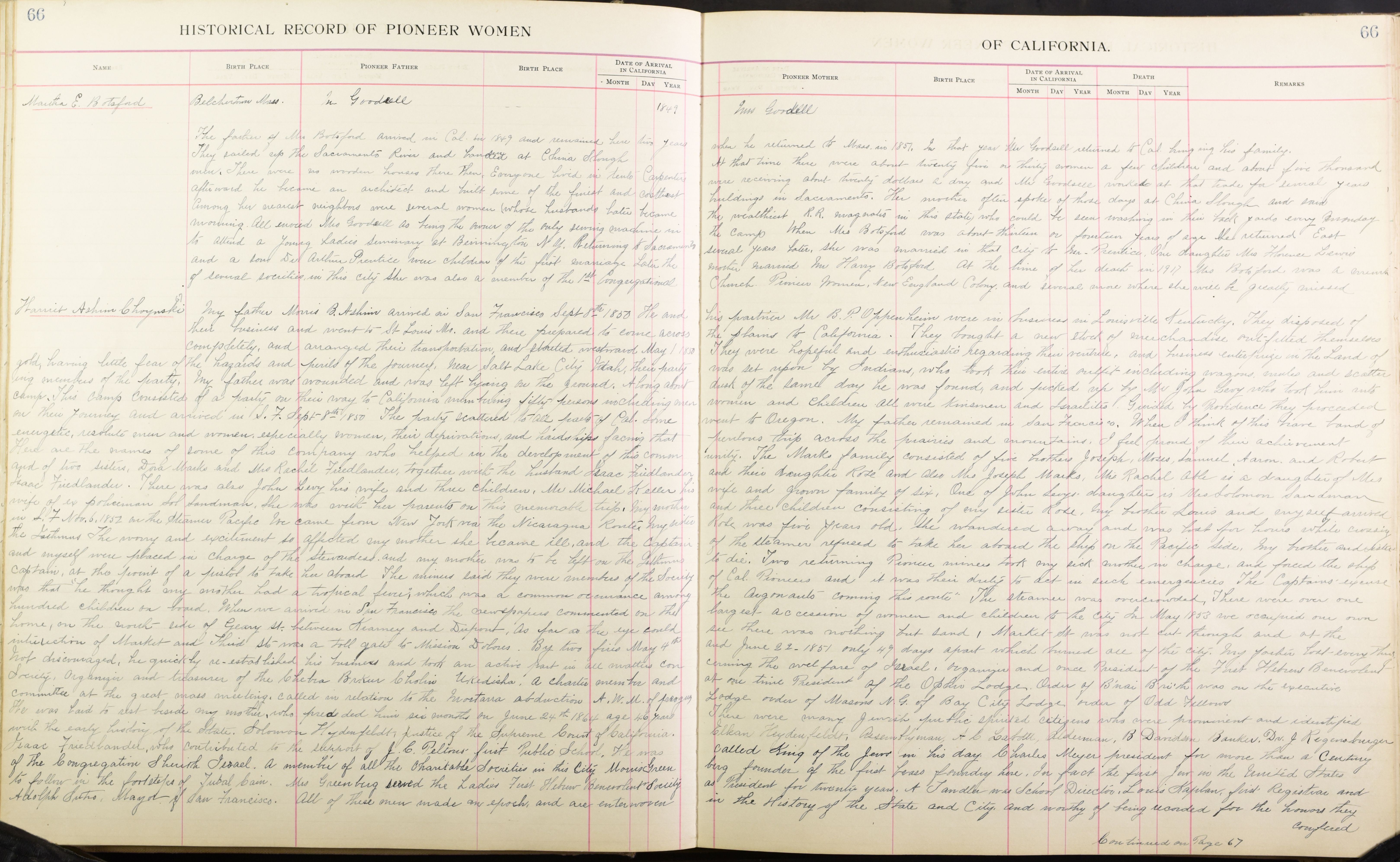 Remarks:  The father of Mrs. Botsford arrived in Cal. in 1849 and remained here to years when he returned to Mass. in 1857. In that year Mr. Goodsell returned to Cal bringing his family. They sailed up the Sacramento River and landed at China Slough. At that time there were about twenty five or thirty women a few children and about five thousand men.  There were no wooden houses there then. Everyone lived in tents. Carpenter were receiving about twenty dollars a day and Mr. Goodsell worked at that trade for several years. Afterward he became an architect and built some of the finest and costliest building in Sacramento. There mother often spoke of those days at China Slough and said among her nearest neighbors were several women (whose husbands later became the wealthiest R.R. magnates in the state) who could be seen washing in their back yards every Monday morning. All envied Mrs. Goodsell as being the owner of the only sewing machine in the camp. When Mrs. Botsford was about thirteen or fourteen years of age she returned East to attend a Young Ladies Seminary at Bennington, N.Y. Returning to Sacramento several years later, she was married in that city to Mr. Prentice. Our daughter Mrs. Florence Lewis and a son Dr. Arthur Prentice were children of this first marriage. Later the mother married MR. Harvey Botsford. At the time of her death in 1917 Mrs. Botsford was a member of several societies in this city. She was also a member of the 1st Congregational Church. Pioneer Women, New England Colony and several more where she will be greatly missed.

My father Morris B. Ashim arrived in San Francisco Sept 8th 1850. He and his partner Mr. B.P. Oppenheim were in business in Louisville, Kentucky. They disposed of their business and went to St. Louis Mo. and there prepared to come across the plains to California. They bought a new stock of merchandise out-fitted themselves completely, and arranged their transportation, and started westward May 1, 1850. They were hopeful and enthusiastic regarding their venture and business enterprise in the Land of gold, having little fear of the hazards and perils of the journey. Near Salt Lake City Utah, their party was set upon by Indians, who took their entire outfit including wagons, mules and scattering members of the party. My father was wounded and was left lying not he ground. Along about dusk of the same day he was found, and picket up by Mr. John Levy who took him into camp. This camp consisted of a party on their way to California numbering fifty persons including men women and children. All were kinsmen and Israelites Guided by Providence. They proceeded on their journey and arrived in S.F. Sept. 8 1850. The party scattered to all parts of Cal. Some went to Oregon. My father remained in San Francisco. When I think of this brave band of energetic, resolute men and women, especially women, their deprivations, and hardship facing that perilous trip across the prairies and mountains, I feel proud of their achievement. Here are the names of some of this company who helped in the development of this community. The Marks family consisted of five brothers, Joseph, Moses, Samuel, Aaron and Robert and two sisters, Dora Marks and Mrs. Rachel Friedlander, together with the husband Isaac Friedlander and their Daughter Rose and also Mrs. Joseph Marks, Mrs. Rachel Able is a daughter of Mrs. Isaac Friedlander. There was also John Levy his wife and three children. Mr. Michael Keller his wife and grown family of six. One of John Levy’s daughters is Mrs. Solomon Sandman, wife of ex-policeman Sol Sandman. She was with her parents on this memorable trip. My mother and three children consisting of my sister Rose, my brother Louis and myself arrived in S.F. Nov.6, 1852 on the Steamer Pacific. We came from New York via the Nicaragua Route. My sister Rose was five years old. She wandered away and was lost for hours while crossing the Isthmus. The worry and excitement so afflicted my mother she became ill and the Captain of the Steamer refused to take her aboard the ship on the Pacific Side. My brother and sister and myself were placed in charge of the Stewardess and my mother was to be left on the Isthmus to die. Two returning Pioneer miners took my sick mother in charge, and forced the ship Captain at the point of a pistol to take her aboard. The miners said they were members of the Society Cal. Pioneers and it was their duty to act in such emergencies. The captains expense was that “he thought my mother had a tropical fever; which was a common occurrence among the Argonauts – coming this route.  The steamer was overcrowded. There were over one hundred children on board.  When we arrived in San Francisco the newspapers commented on the largest accession of women and children to the city. In May 1853 we occupied our own home, on the north- side of Geary St. Between Kearney and Dupont. As for as the eye could see there was nothing but sand, Market St. was not cut through and at the intersection of Market and Third St., was a tall gate to Mission Dolores. By two fires May 4th and June 22, 1851 only 49 days apart which burned all of the city. My father lost everything . Not discouraged, he quickly re-established his business and took an active part in all matters concerning the welfare of Israel. Organizer and once President of the First Hebrew Benevolent Society, Organizer and treasurer of the Chebra Brkur Cholin Ukedisha. A charter member and at one time President of the Ophir Lodge. Order of B’nai Brith was on the executive committee at a the great mass meeting called in relation to the Montana abduction A.W.M. of [illegible] Lodge order of Masons N.G. of Bay City Lodge, order of Odd Fellows. He was laid to rest beside my mother who preceded him six months on June 24, 1864 age 46 years. There were many Jewish public spirited citizens who were prominent and identified with the early history of the State. Solomon Heydenfeld, justice of the Supreme Court of California. Elkan Heydenfeldt, Assemblyman, A.C. [illegible], Alderman, B. Davidson Banker, dr. J. Regensburger Isaac Friedlander, who contributed to the support of J.C. Peltons first Public School. He was called King of the Jews in his day. Charles Meyer president for more than a century of the Congregation Sherith Israel. A member of all the Charitable Societies in this City. Morris Greenberg founder of the first brass foundry here. In fact the first Jew in the United States to follow in the footsteps of [illegible] Cain. Mrs. Greenberg served the Ladies First Hebrew Benevolent Society as President for twenty years.  A Sandler was School Director, Louis Kaplan, first Registrar and Adolph Sutro, Mayor of San Francisco.  All of these men made an epoch and are interwoven in the History of the State and City, and worthy of being recorded for the honors they conferred