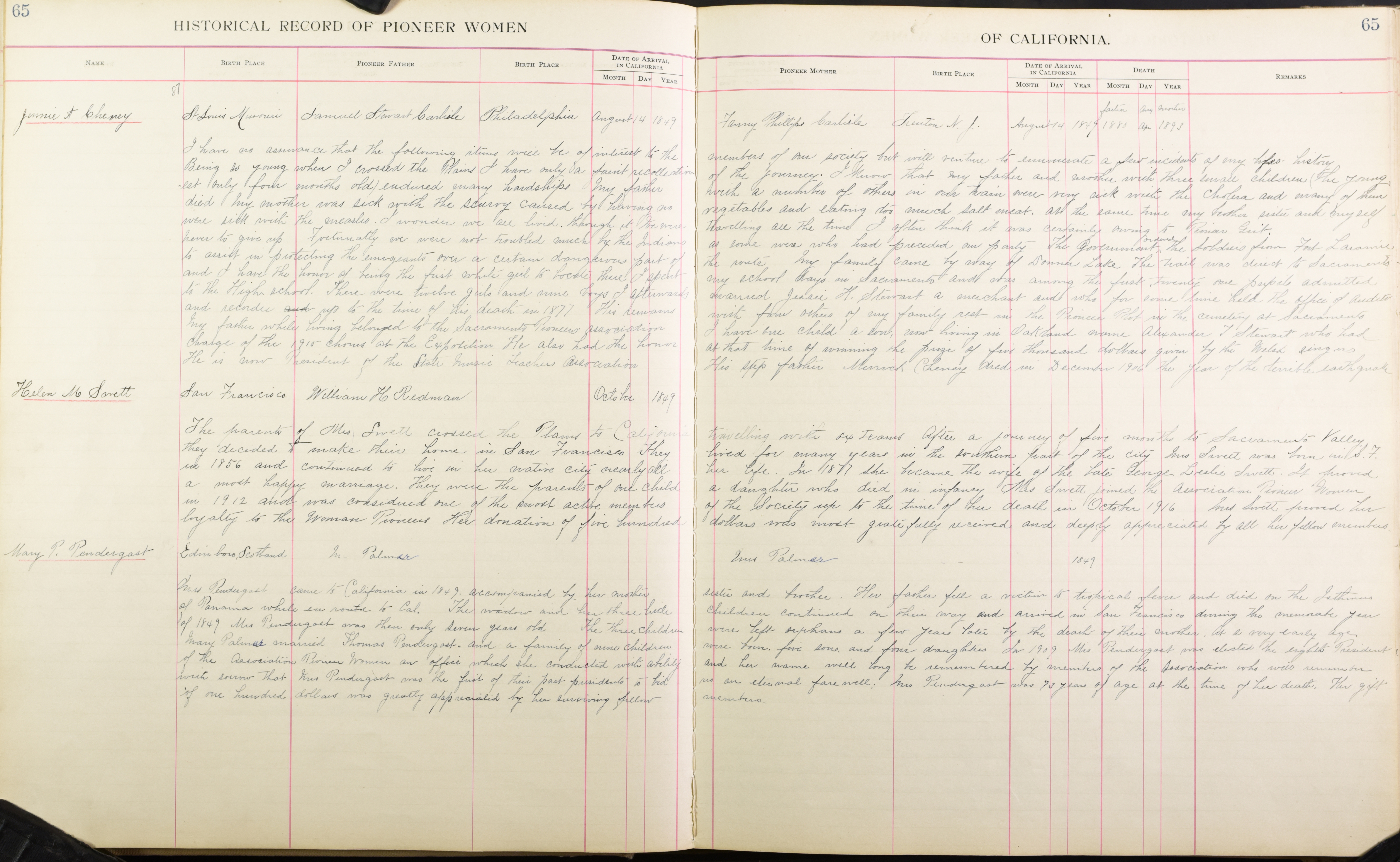 Remarks: I have no assurance that the following items will be of interest to the members of our society but will venture to enunciate a few incidents of my lifes history. Being so young when I crossed the Plains I have only a faint recollection of the journey. I know that my father and mother with three small children (the youngest only four months old) endured many hardships. My father with a number of others in our train were very sick with the cholera and many of them died. My mother was sick with the scurvy caused by having no vegetables and eating too much salt meat.  At the same time my brother sister and myself were sick with the measles. I wonder we all lived through it. We were travelling [sic] all the time . I often think it was certainly owing to Pioneer Grit never to give up. Fortunately we were not troubled much by the Indians as some were who had preceded our party. The Government ordered the Soldiers from Fort Laramie to assist in protecting the emigrants over a certain dangerous part of the route. My family came by way of Donner Lake. The trail was direct to Sacramento and I have the honor of being the first white girl to locate there. I spent my school days in Sacramento and was among the first twenty one pupils admitted to the High School. There were twelve girls and nine boys. I afterwards married Jessie H. Stewart a merchant and who for some time held the office of Auditor and recorder up to the time of his death in 1877.  His remains with four others of my family rest in the Pioneer Plot in the cemetery at Sacramento. My father while living belonged to the Sacramento Pioneers Association. I have one child a son, now living in Oakland, name Alexander T. Stewart who had charge of the 1915 chorus at the Exposition. He also had the honor at that time of winning the prize of five thousand dollars given by the Welsh singers. He is now President of the State Music Teachers Association. His step father, Merrick Cheney died in December 1906 the year of the terrible earthquake.

Remarks: The parents of Mrs. Swett crossed the Plains to California traveling with ox teams. After a journey of five months to Sacramento Valley. They decided to make their home in San Francisco. They lived for many years in the southern part of the city. Mrs. Swett was born in S.F. in 1856 and continued to live in her native city nearly all her life.  In 1877 she became the wife of the late George Leslie Swett.  It proved a most happy marriage. They were the parents of one child a daughter who died in infancy. Mrs. Swett joined the Association of Pioneer Women in 1912 and was considered one of the most active members of the Society up to the time of her death in October 1916. Mrs. Swett proved her loyalty to the Woman Pioneers. Her donation of five hundred dollars was most gratefully received and deeply appreciated by all her fellow members.

Remarks: Mrs. Pendergast came to California in 1849 accompanied by her mother sister and brother. Her father fell a victim to tropical fever and died on the Isthmus of Panama while en route to Cal. The widow and her three little children continued on their way and arrived in San Francisco during the memorable year of 1849. Mrs. Pendergast was then only seven years old. The three children were left orphans a few years later by the death of their mother. At a very early age Mary Palmer married Thomas Pendergast and a family of nine children were born. five sons and four daughters. In 1909 mrs. Pendergast was elected the eighth President of the Association Pioneer Women an office which she conducted with ability and her name will long be remembered by members of the Association who will remember with sorrow that Mrs. Pendergast was the first of their past presidents to bid us an eternal farewell. Mrs. Pendergast was 73 years of age at the time of her death. the gift of one hundred dollars was greatly appreciated by her surviving fellow members.