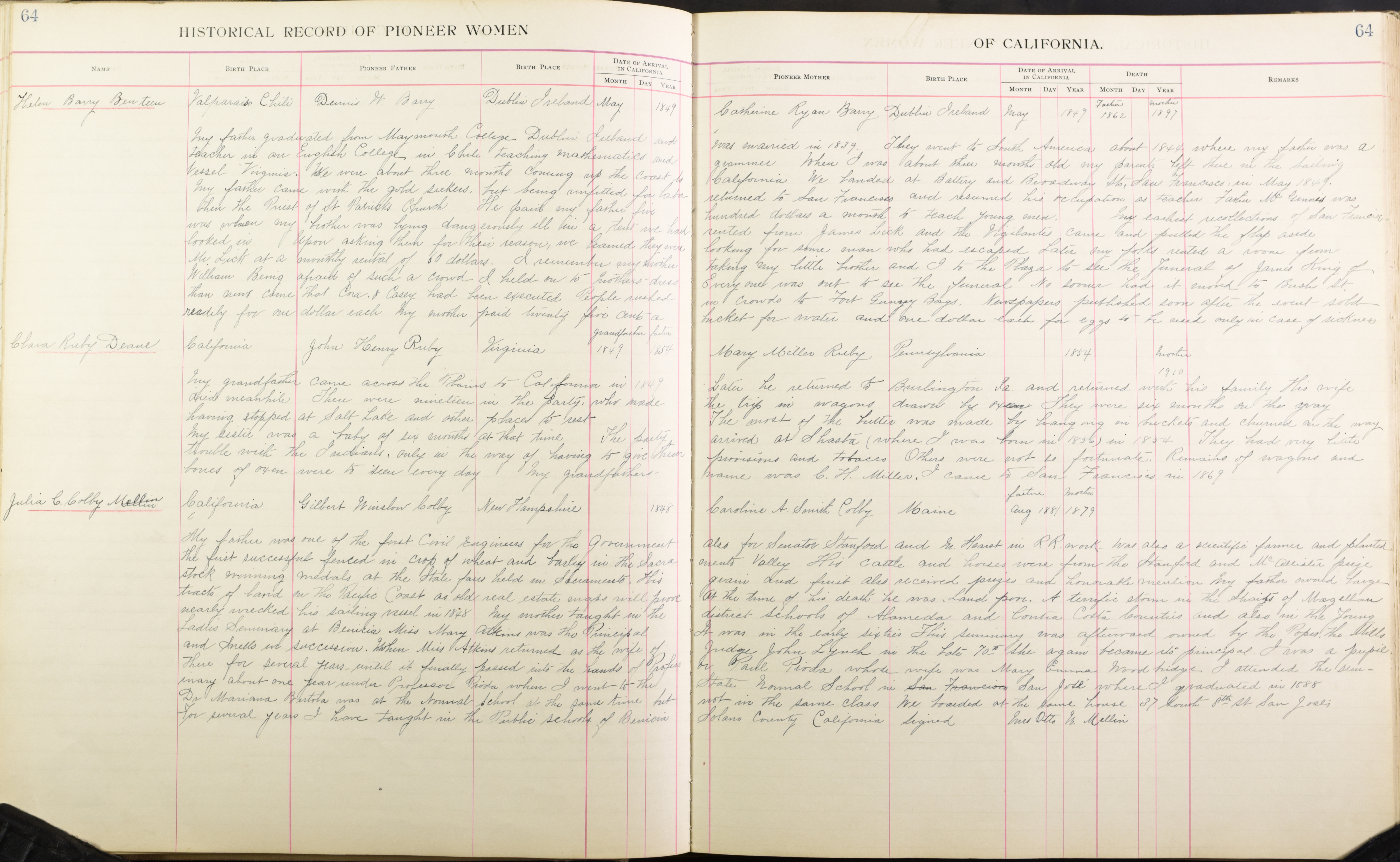 Remarks: My father graduate from Mammoth College, Dublin Ireland, and was married in 1839. They (Catherine Ryan Barry) went to South America about 1844 where my father was a teacher in an English College in Chile teaching mathematics and grammer [sic]. When I was about three months old my parents left there in the Sailing Vessel Virginia. We were about three months coming up the coast to California. We landed at Battery and Broadway Ssts., San Francisco, in May 1849. My father came with the gold seekers, but being unfitted for labor returned to San Francisco and resumed his occupation as teacher. Father McGinnis was then the Priest of St. Patricks Church. He paid my father five hundred dollars a month to teach young men. My earliest recollections of san Francisco was when my brother was lying dangerously ill in a tent we had rented from James Lick and the Vigilantes came and pulled the flap aside, looked in. Upon asking them for their reason, we learned they were looking for some man who had escaped. Later my folks rented a room from Mr. Lick at a monthly rental of 60 dollars. I remember my mother taking my little brother and I to the Plaza to see the funeral of James King of William. Being afraid of such a crowd, I held on to mother’s dress. Everyone was out to see the funeral. No sooner had it moved to Bush St., than men came that Cora & Casey had been executed. People rushed in crowds to Fort Gunny Bags. Newspaper published soon after the even sold readily for one dollar each. My mother paid twenty five cents a bucket for water and one dollar each for eggs to be used only in case of sickness.

Remarks: My grandfather came across the Plains to California in 1849. Later he returned to Burlington, Ia. and returned with his family. His wife died meanwhile. There were nineteen in the party, who made the trip in wagons drawn by opens. They were six months on the way having stopped at Salt Lake and other places to rest. The most of the butter was made by having in buckets and churned on the way. My sister was a baby of six months at that time. The party arrived at Shasta (where I was born in 1856) in 1854. They had very little trouble with the Indians, only in the way of having to give them provisions and tobacco. Others were not so fortunate. Remains of wagons and bones of oxen were to seen every day. My grandfathers name was C. H. Miller. I came to San Francisco in 1869.

Remarks: My father was one of the first Civil Engineers for the government. Also for Senator Stanford and Mr. Hearst in RR work, was also a scientific farmer and planted the first successful fenced in crop of wheat and barley in the Sacramento Valley. His cattle and horses were from the Stanford and McAllister prize stock winning medals at the State fairs held in Sacramento. His grain and fruit also received prizes and honorable mention. My father owned large tracts of land on the Pacific Coast as old real estate maps will prove. At the time of his death he was Land poor. A terrific storm in the Straights of Magellan nearly wrecked his sailing vessel in 1848. My mother taught in the district Schools of Alameda and Contra Costa Counties and also in the Young Ladies Seminary at Benicia. Miss Mary Atkins was the Principal. It was in the early sixties. This Seminary was afterward owned by the Popes. The Mills and Snells in succession. When Miss Atkins returned as the wife of Judge John Lynch in the late 70s, She again became its principal. I was a pupil there for several years until it finally passed into the hands of Professor Paul Pioda whose wife was Mary Emma Woodbridge. I attended the seminary about one year under Professor Pioda when I went to the State Normal School in San Jose where I graduate in 1888. Dr. Mariana Bertola was at the Normal School at the same time but not in the same class. We boarded at the same house, 37 South 8th st. San Jose. For several years I have taught in the Public Schools of Benicia Solano County California. Signed,