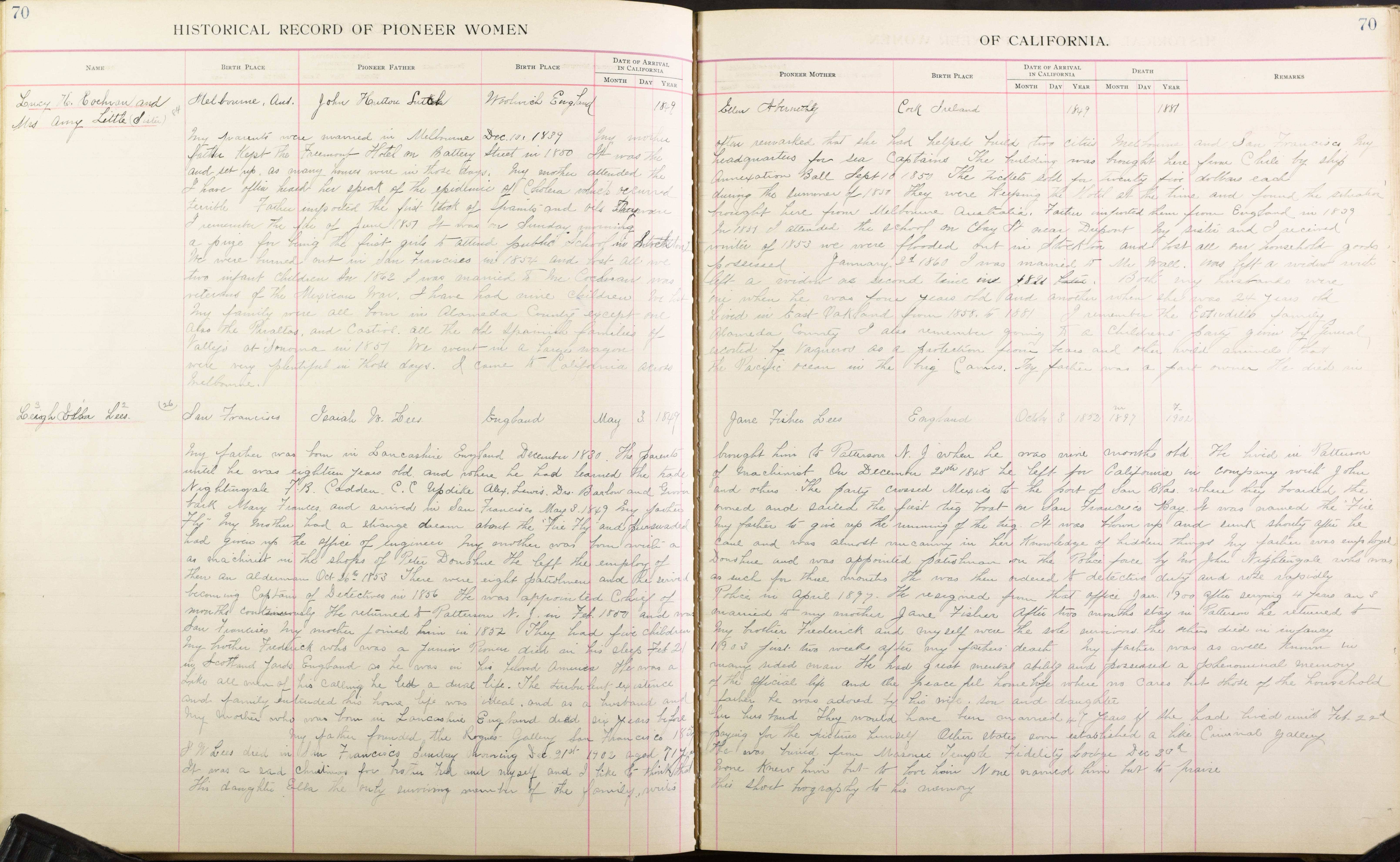 Remarks: My parents were married in Melbourne Dec. 10, 1839. My mother often remarked that she had helped build two cities  Melbourne and San Francisco. My father kept The Freemont [sic] Hotel on Battery Street in 1850  It was the headquarters for sea Captains.  The building was brought here from Chile by ship and set up as many homes were in those days. My mother attended the Annexation Ball Sept 10 1850.  The tickets sold for twenty five dollars each.  I have often heard her speak of the epidemic of Cholera which occurred during the summer of 1850.  They were keeping the Hotel at the time and found the situation terrible.  Father imported the first stock of paints and oils.  They were brought here from Melbourne Australia. Father imported them from England in 1859.  I remember the fire of June 1851.  It was on Sunday morning.  In 1851  I attended the school on Clay St near Dupont  My sister and I received a prize for being the first girls to attend public school in Stockton.  Winter of 1853 we were flooded out in Stockton and lost all our household goods.  We were burned out in San Francisco in 1854 and lost all our possessed [sic].  January 2d 1860 I was married to Mr. Wall.  Was left a widow with two infant children.  In 1862 I was married to Mr. Cochran was left a widow a second time in 1891. Both my husbands were veterans of The Mexican War.  I have had nine children.  We lost one when he was four years old and another when she was 24 years old.  My family were all born in Alameda County except one  Lived in East Oakland from 1858 to 1881.  I remember the Estudillo family.  Also the Peraltas, and Castros.  All the old Spanish families of Alameda County. I also remember going to a childrens’ party given by General Vallejo at Sonoma in 1851.  We went in a large wagon escorted by vaqueros as a protection from bears and other wild animals that were very plentiful in those days. I came to California across the Pacific ocean in the brig Cames. My father was a part owner.  He died in Melbourne.

Remarks: My father was born in Lancashire England December 1830. His parents brought him to Patterson N. J when he was nine months old. He lived in Patterson until he was eighteen years old and where he had learned the trade of machinist.  On December 20th 1848 he left for California in company with John Nightingale, F. R. Cadden, C. C. Updike, Alex. Lewis, Drs. Barlow and Givver and others.  The party crossed Mexico to the port of San Blas where they boarded the bark Mary Frances and arrived in San Francisco May 3, 1849.  My father owned and sailed the first big boat on San Francisco Bay. It was named the “Fire Fly”.  My mother had a strange dream about the “Fire Fly” and pursuaded [sic] my father to give up the running of the brig. It was blown up and sunk shortly after he had given up the office of engineer.  My mother was born with a caul and was almost uncanny in her knowledge of hidden things.  My father was employed as machinist in the shops of Peter Donohue.  He left the employ of Donohue and was appointed patrolman on the Police force by Mr. John Nightingale who was then an alderman Oct 26th 1853.  There were eight patrolmen and he served as such for three months  He was then ordered to detective duty and rose rapidly becoming Captain of Detectives in 1856.  He was appointed Chief of Police in April 1897. He resigned from that office Jan. 1900 after serving 4 years an [sic] 3 months continuously.  He returned to Patterson N. J. in Feb. 1850 and was married to my mother Jane Fisher.  After two months stay in Patterson he returned to San Francisco.  My mother joined him in 1852. They had five children. My brother Frederick and myself were the sole survivors. The others died in infancy.  My brother Frederick who was a Junior Pioneer died in his sleep Feb 21 1903 just two weeks after my father’s death  My father was as well known in in [sic] Scotland Yards England as he was in his beloved America.  He was a many sided man.  He had great mental ability and possessed a phenomenal memory.  Like all men of his calling he led a dual life. The turbulent existence of the official life and the peaceful home life where no cares but those of the household and family intruded his home life was ideal. And as a husband and father he was adored by his wife, son and daughter.  My mother who was born in Lancashire England died six years before her husband.  They would have been married 47 years if she had lived until Feb. 22d

My father founded the Rogues Gallery San Francisco 1857 paying for the pictures himself.  Other states soon established a like Criminal Gallery.  I. W. Lees died in San Francisco Sunday morning Dec. 21st 1902 aged 71 years.  He was buried from Masonic Temple Fidelity Lodge Dec 20th.  It was a sad Christmas for brother Fred and myself and I like to think that none knew him but to love him  None named him but to praise.  His daughter Ella the only surviving member of the family writes this short biography to his memory.