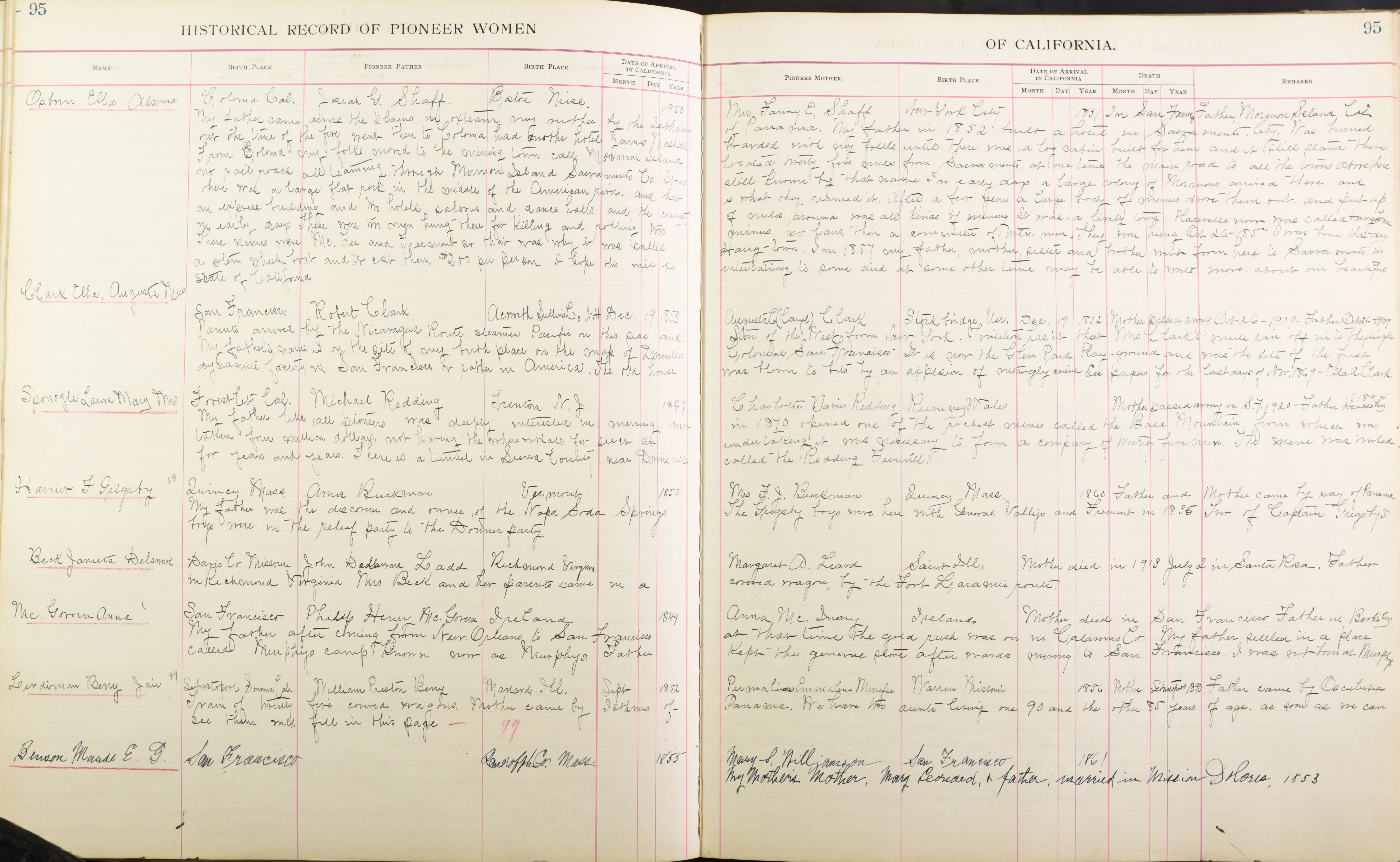 Remarks: My father came across the plains on oxteam [sic]. My mother by Isthmus of Panama. My father in 1852 built a hotel in Sacramento City. Was burned at the time of the fire. Went then to Coloma, had another hotel. James Marshall boarded with my folks until there was a log cabin built for him and it still stands there. From Coloma my folks moved to the mining town call [sic] Mormon Island located twenty five miles from Sacramento at one time. The main road to all the towns above there were railroads all teaming through Mormon Island Sacramento Co. It is still known by that name. In early days a large colony of Mormons arrived there and there was a large flat rock in the middle of the American river and that is what they named it. After a few years a large body of miners drove them out and put up an express building and two hotels, saloons and dance halls and the county of miles around was all kinds of mining. It was a lively time. Placerville [illegible] was called HangTown [sic] in early days. There were two men hung for killing and robbing two miners. No laws. [illegible] a [illegible] of these men. They were hung Oct. 26, 1857. I was born that day. There [sic] names were McFee and Freemont so that was why it was called Hang-Town [sic]. In 1857 my father, mother, sister and brother went from here to Sacramento in a steam wheel boat and it cost $2.00 per person. I hope this will be entertaining to some and at some other time may be able to write more about our beautiful state of California.

Remarks: Parents arrived by the Nicaragua Route, steamer Pacific on this side and Star of the West from New York. Tradition has it that Mrs. Clark’s mule ran off into the jungle. My father’s name is on the site of my birth place on the map of [illegible] Colonial San Francisco. It is now the Glen Park Play-ground and was the site of the first dynamite factory in San Francisco or rather in America. The old house was blown to bits by an explosion of nitroglycerine. See papers for the last days of Nov 1869 – Ella A. Clark

Remarks: My father like all pioneers was deeply interested in mining and in 1870 opened one of the richest mines called the Bald Mountain from which was taken four million dollars. Not having the wherewithall for such an undertaking it was necessary to form a company  of twenty five men. The mine was worked for years and years. There is a tunnel in Sierra County near Downieville called the Redding Tunnel.

Remarks: Father and mother came by way of Panama. My father was the discoverer and owner of the Napa Soda Springs. The Grigsby boys were here with General Vallejo and Fremont in 1835. Two of Captain Grigsby’s boys were with the relief party to the Donner party.

Remarks: Mrs. Beck and her parents came in a covered wagon by the Fort Laramie route.

Remarks: My father after coming from New Orleans to San Francisco at that time the gold rush was in Calaveras Co. My father settled in a place called Murphys camp known as Murphys. Father kept the general store, afterwards moving to San Francisco. I was not born at Murphys.

Remarks: Father came by [illegible] Train of twenty five covered wagons. Mother came by Isthmus of Panama. We have two aunts living, one 90 the other 85 years of age. As soon as we can see them, will fill this page. [See page 99]

Remarks: My mother’s mother, Mary Leonard, and father married in Mission Dolores in 1853