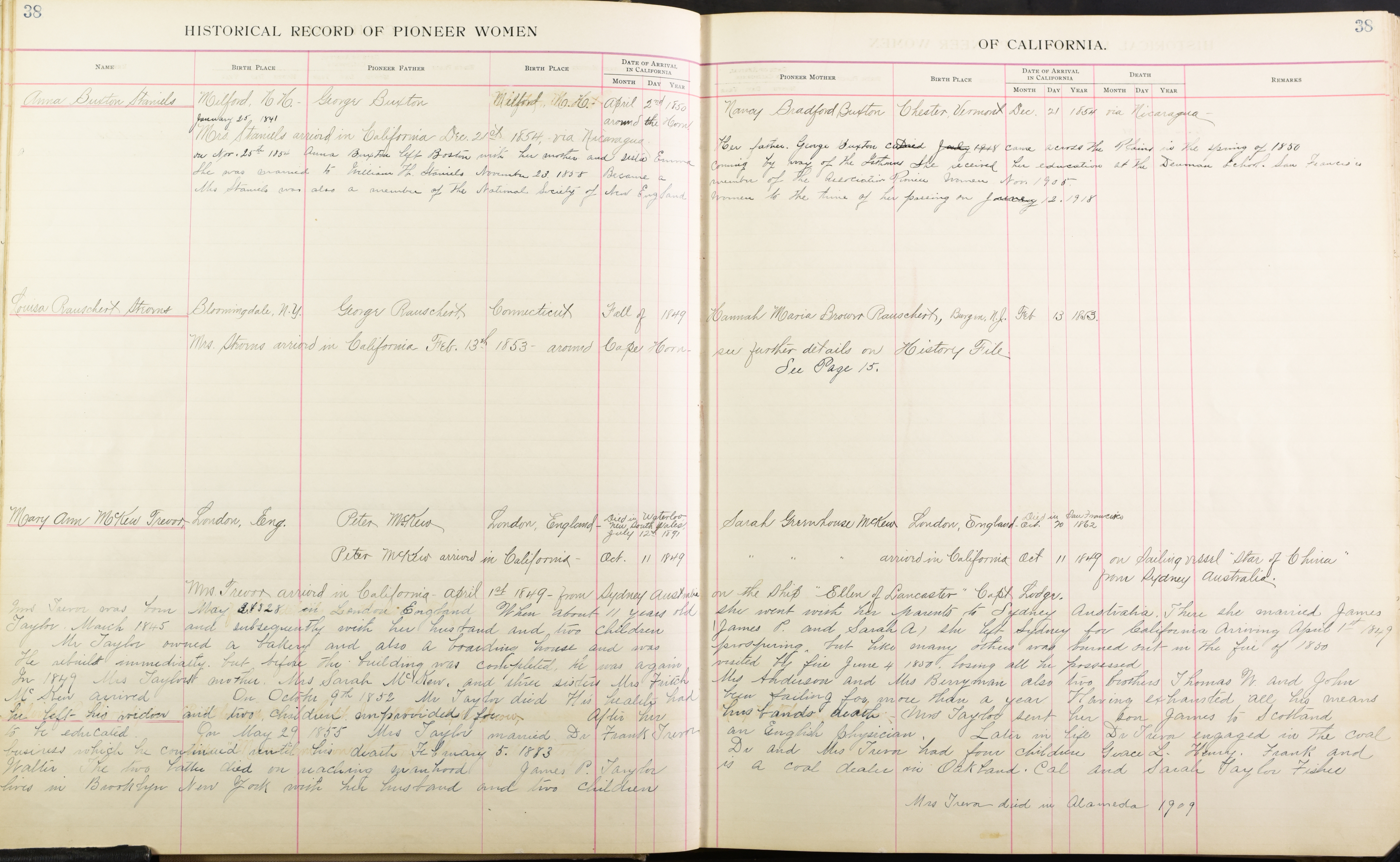 Remarks: Mrs. Staniels arrived in California Dec. 21st 1854, via Nicaragua. Her father George Buxton copied July 1918 came across the Plains in the spring of 1850 on Nov. 25th 1854. Anna Buxton left Boston with her mother and sister Emma coming by way of the Isthmus. She received her education at the Denman School, San Francisco. She was married to William H. Staniels November 23, 1858. Became a member of the Association Pioneer Women Nov. 1905. Mrs. Staniels was also a member of the National Society of New England Women to the time of her passing on January 12, 1918.

Mrs. Trevor arrived in California April 1st 1849 – from Sydney, Australia on the ship “Ellen of Lancaster” Capt. Lodge. Mrs. Trevor was born May 2, 1828 in London, England. When about 11 years old she went with her parents to Sydney, Australia. There she married James Taylor March 1845 and subsequently with her husband and two children, James P. and Sarah A, she left Sydney for California arriving April 1st 1849. Mr. Taylor owned a bakery and also a boarding house and was prospering, but like many others was burned out in the fire of 1850. He rebuilt immediately, but before the building was completed, he was again visited by fire June 4, 1850, losing all he possessed. In 1849 Mrs. Taylor’s mother, Mrs. Sarah McKew, and there sisters Mrs. Fritch, Mrs. Anderson, and Mrs. Berryman also two brothers Thomas W and John McKew arrived. On October 9th 1852 Mr. Taylor died. His health had been failing for more than a year. Having exhausted all his means he left his widow and his two children unprovided for. After her husband’s death. Mrs. Taylor sent her son James to Scotland to be educated. On May 29, 1855 Mrs. Taylor married Dr. Frank Trevor an English physician. Later in life Dr. Trevor engaged in the coal business which he continued until his death February 5, 1883. Dr. and Mrs. Trevor had four children Grace L. Henry, Frank and Walter. The two latter died on reaching manhood. James P. Taylor is a coal dealer in Oakland, Cal and Sarah Taylor Fisher lives in Brooklyn, New York with her husband and two children. Mrs. Trevor died in Alameda 1909.