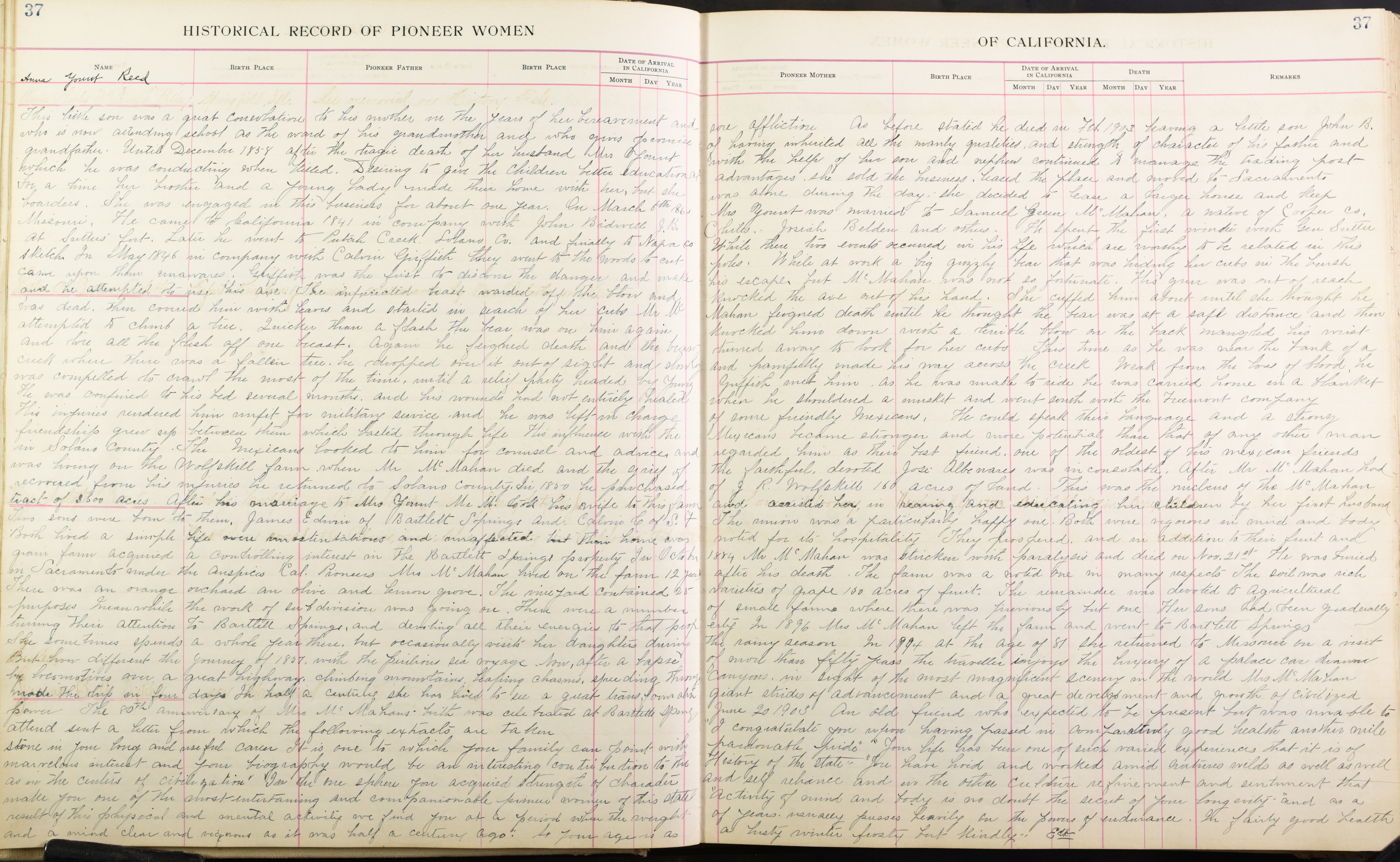 [written at top of  the page] Anna Yount Reed

This little son was a consolation to his mother in the years of her bereavement and sore affliction. As before stated he died in Feb. 1903 leaving a son John B. who is now attending school as the ward of his grandmother and who gives promise of having inherited all the manly qualities, and strength of character of his father and grandfather. Until December 1858, after the tragic death of her husband Mrs. Yount with the help of her son and nephew continued to manage the trading post which he was conducting when killed. Desiring to give the children better education advantages she sold the business, leased the place and moved to Sacramento. In a time her brother and a young lady made their home with her, but she was alone during the day; she decided to lease a larger house and keep boarders. She was engaged in this for about one year. On March 6th 1860, Mrs. Yount was married to Samuel Green McMahan, a native of Cooper Co. Missourri. He came to California 1841 in company with John Bidwell, JB Chiles, Josiah Belden and others. He spent the first winter with Gen. Sutter at Sutter’s fort. Later he went to Putah Creek, Solano Co. and finally to Napa Co. While there two events occurred in his life which are worthy to be related in this sketch. In May 1846 in company with Calvin Griffith they went to the woods to cut poles. While at work a big grizzle bear that was hiding her cubs in the brush cam upon them unawares. Griffith was the first to discover the danger and make his escape, but McMahan was not as fortunate. His gun was out of reach and he attempted to use his axe. The infuriated beast warded off the blow and knocked the axe out of his hand. She cuffed him about until she thought he was dead, the covered him with leaves and started in search of her cubs. Mr. McMahan feigned death until he thought the bear was at a safe distance and then attempted to climb a tree. Quicker than a flash the bear was on him again, knocked him down with a terrible blow on the back, mangled his wrist, and tore all the flesh off one breast. Again he feigned death and the beast turned away to look for her cubs. This time as he was near the bank of a creek where there was a fallen tree, he dropped over it and out of sight and slowly and painfully made his way across the creek. Weak from the loss of blood, he was compelled to crawl the most of the time, until a relief party headed by young Griffith met him. As he was unable to ride, he was carried home in a blanket. He was confined to his bed several months, and his wounds had not entirely healed when he shouldered a musket and went south with the Freemont company. His injuries rendered him unfit for military service and he was left in charge of some friendly Mexicans. He could speak their language and a strong friendship grew up between them which lasted throughout life. His influence with the Mexicans became stronger and more potential than that of any other man in Solano County. The Mexicans looked to him for counsel and advice, and regarded him as their best friend. One of the oldest of this Mexican friends was living on the Wolfskill farm when Mr. McMahan died and the grief of the faithful, devoted Jose Albewares was inconsolable. After Mr. McMahan had recovered from his injuries he returned to Solano County. In 1850 he purchased of JR Wolfskill 160 acres of land. This was the nucleus of the McMahan tract of 3600 acres. After his marriage to Mrs. Yount, Mr. M. took his wife to this farm and assisted her in learning and educating her children by her first husband. Two sons were born to them, James Edwin of Bartlett Springs and Calvin C. of S.F. The union was a particularly happy one. Both were vigorous in mind and body. Both lived a simple life, were unostintatious [sic] and unaffected but their home was noted for its hospitality. They prospered, and in addition to their fruit and grain farm acquired a controlling interest in The Bartlett Springs property. In October 1884 Mr. McMahan was stricken with paralysis and died on Nov. 21st. He was buried in Sacramento under the auspices Cal. Pioneers. Mrs. McMahan lived on the farm 12 years after his death. The farm was a noted one in many respects. The soil was rich. There was an orange orchard, an olive and lemon grove. The vineyard contained 25 varieties of grape, 150 acres of fruit. The remainder was devoted to agricultural purposes. Meanwhile the work of subdivision was going on. There were a number of small farms where there was previously but one. Her sons had been gradually turning their attention to Bartlett Springs, and devoting all their energies to that property. In 1896, Mrs. McMahan left the farm and went to Bartlett Springs. She sometimes spends a while year there, but occasionally visits her daughters during the rainy season. In 1894 at the age of 81 she returned to Missouri on a visit. But how different the journey of 1857, with the perilous sea voyage. Now, after a lapse of more than fifty years the traveler enjoys the luxury of a palace car drawn by locomotives on a great highway, climbing mountains, leaping chasms, speeding through canyons, in sight of the most magnificent scenery in the world. Mrs. McMahan made the trip in four days. In half a century she has lived to see a great transformation, giant strides of advancement and a great development and growth of civilized power. The 80th anniversary of Mrs. McMahan’s birth was celebrated at Bartlett Springs June 20, 1903. An old friend who expected to be present but was unable to attend sent a letter from which the following extracts are taken.

“I congratulate you upon having passed in comparatively good health another mile stone in your long and useful career. It is one to which your family can paint with a pardonable pride.” “Your life has been one of such varied experiences that it is of marvelous interest and your biography would be an interesting contribution to the History of the State.” “You have lived and worked amid natives wilds as well as well as in the centers of civilization.” “In the one sphere you acquired strength of character and self-reliance and in the other culture, refinement, and sentiment that make you one of the most interesting and companionable pioneer women of this state.” “Activity of mind and body is no doubt the secret of your longevity, and as a result of this physical and mental activity we find you at a period when the weight of years usually presses heavily on the powers of endurance. In fairly good health and mind clear and vigorous as it was half a century ago.” “So your age is as a lusty winter frosty but kindly.”