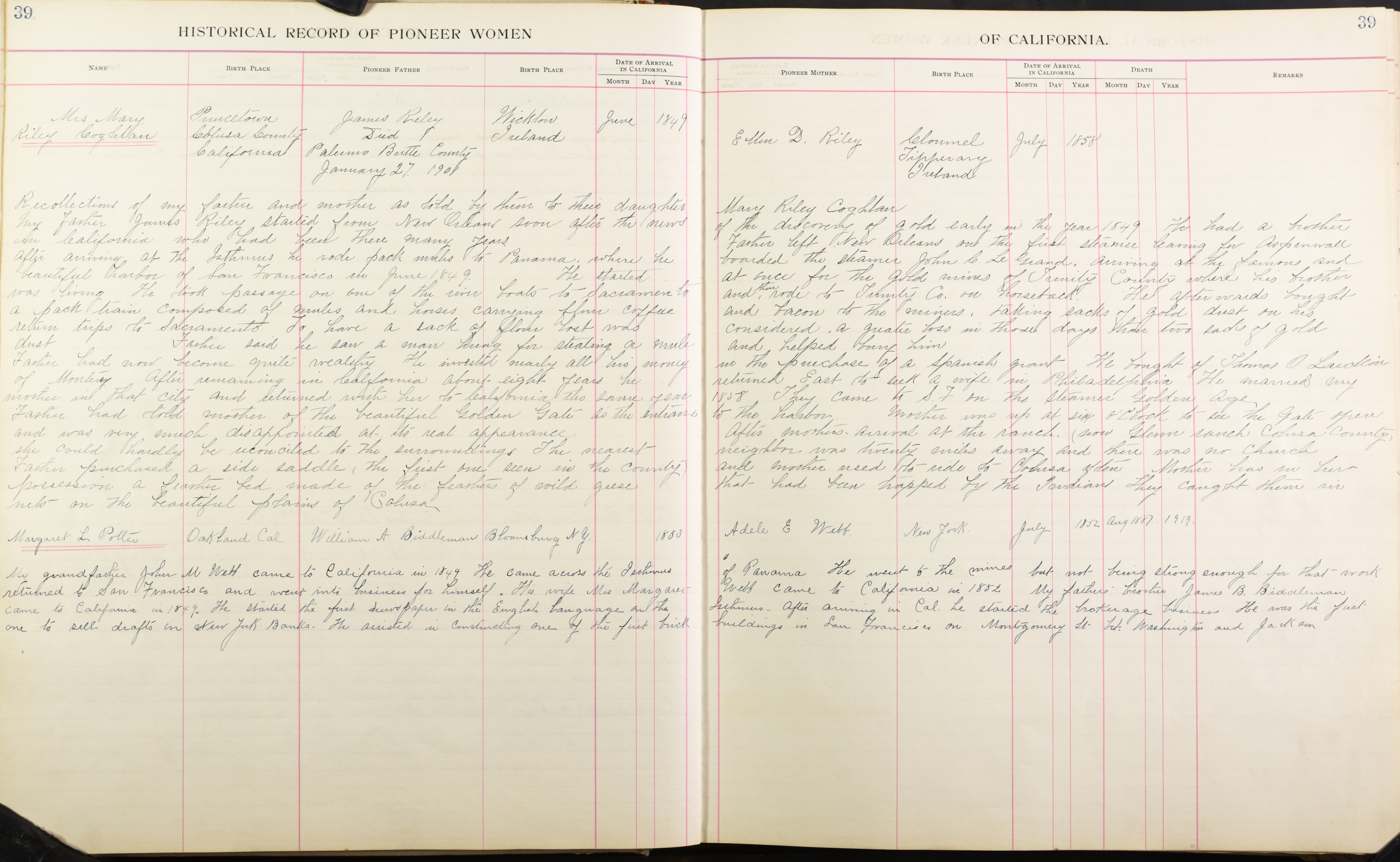 Remarks: Recollections of my father and mother as told by them to three daughters Mary Riley Coghlan. My father James Riley started from New Orleans soon after the news of the discovery of gold early in the new year 1849. He had a brother in California who had been there many years. Father left New Orleans on the first steamer leaving for Aspinwall. After arriving at the Isthmus he rode pack mules to Panama where he boarded the steamer John C. LeGrand, Arriving at the famous and beautiful harbor of San Francisco in June 1849. He started at once for the gold mines of Trinity County where his brother was living. He took passage on one of the river boats to Sacramento and then rode to Trinity Co. on horseback. He afterwards bought a pack train composed of mules and horses carrying flour, coffee and bacon to the miners, taking sacks of gold dust on his return trips to Sacramento. To have a sack of flour lost was considered a greater loss in those days than two sacks of gold dust. Father said he saw a man hung for stealing a mule and helped bury him. Father had now become quite wealthy. He invested nearly all his money in the purchase of a Spanish grant. He bought of Thomas O’ Laucleiu of Monterey. After remaining in California about eight years he returned East to seek a wife in Philadelphia. He married my mother in that city and returned with her to California the same year 1858. They came to S.F on the steamer Golden Age. Father had told mother of the beautiful Golden Gate  as the entrance to the harbor. Mother was up at six o’clock to see the gate open and was very much disappointed at its real appearance. After mother’s arrival at the ranch (now Glenn ranch Colusa County) she could hardly be reconciled to the surroundings. The nearest neighbor was twenty miles away and there was no church. Father purchased a side saddle (the first one seen in the country) and mother used to ride to Colusa often. Mother has in her possession a feather bed made of the feathers of wild geese that had been trapped by the Indians. They caught them in nets on the beautiful plains of Colusa.