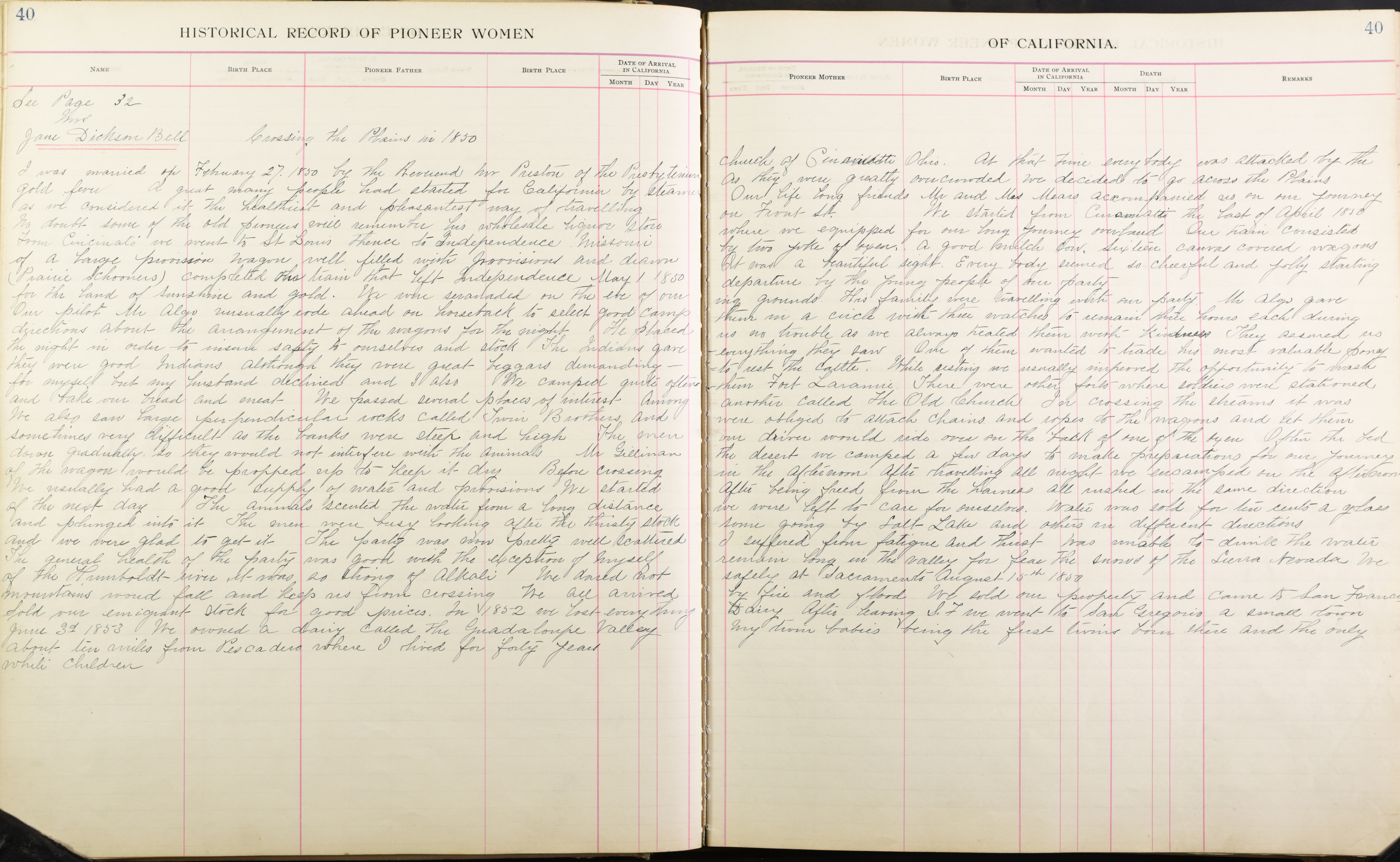 Crossing the Plains in 1850

I was married on February 28, 1850 by the Reverend Mr. Preston of the Presbyterian Church of Cincinnati Ohio. At that time everybody was attacked by the gold fever. A great many people had started for California by steamer as they were greatly overcrowded we decided to go across the Plains as we considered it the healthiest and pleasantest way of travelling. [sic] Our life long friends Mr. and Mrs. Mears accompanied us on our journey. No doubt some of the old pioneers will remember his wholesale liquor store on Front St. We started from Cincinnati the last of April 1850. From Cincinnati we went to St. Louis thence to Independence Missouri where we equipped for our long journey overland. Our train consisted of a large provision wagon, well filled with provisions and drawn by two yoke of oxen. A good Milch [sic] cow, sixteen canvas covered wagons (Prairie Schooners), completed the train that left Independence May 1, 1850. It was a beautiful sight. Every body seemed so cheerful and jolly starting for the land of sunshine and gold. We were serenaded on the eve of our departure by the young people of our party. Our pilot Mr. Algo usually rode ahead on horseback to select good camping grounds. His family were travelling with our party.

Directions about the arrangement of the wagons for the night. He placed them in a circle with three watches to remain three hours each during  the night in order to insure safety to ourselves and stock. The Indians gave us no trouble as we always treated them with kindness. They assured us they were good Indians. Although they were great beggars demanding everything they saw. One of them wanted to trade his most valuable pony for myself but my husband declined and I also. We camped quite often to rest the cattle. While resting we usually improved the opportunity to wash and bake our bread and meat. We passed several places of interest. Among them Fort Laramie. There were other forts where soldiers were stationed. We also saw large perpendicular rocks called Twin Brothers and another called The Old Church. For crossing the streams it was sometimes very difficult as the banks were steep and high. The men were obliged to attach chains and ropes to the wagons and let them down gradually so they would not interfere with the animals. Mr. Gillinan our driver would ride over on the back of one of the oxen. Often the bed of the wagon would be propped up to keep it dry. Before crossing the desert we camped a few days to make preparations for our journey. We usually had a good supply of water and provisions. We started in the afternoon. After travelling all night we encamped on the afternoon of the next day. The animals scented the water from a long distance. After being freed from the harness all rushed in the same direction and plunged into it. The men were busy looking after the thirsty stock we were left to care for ourselves. Water was sold for ten cents a glass and we were glad to get it. The party was soon pretty well scattered some going by Salt Lake and others in different directions.

The general health of the party was good with the exception of myself. I suffered from fatigue and thirst. Was unable to drink the water of the Humboldt River. It was so strong of Alkali. We dared not remain long in the valley for fear the snow of the Sierras Nevada mountains would fall and keep us from crossing. We all arrived safely at Sacramento August 15th 1850.

Sold our emigrant stock for good prices. In 1852 we lost everything by fire and flood. We sold our property and came to San Francisco June 3d, 1853. We owned a dairy called the Guadaloupe Valley Dairy. After leaving S.F. we went to San Gregorio, a small town about ten miles from Pescadero where I lived for forty years. My twin babies being the first twins born there and the only white children.