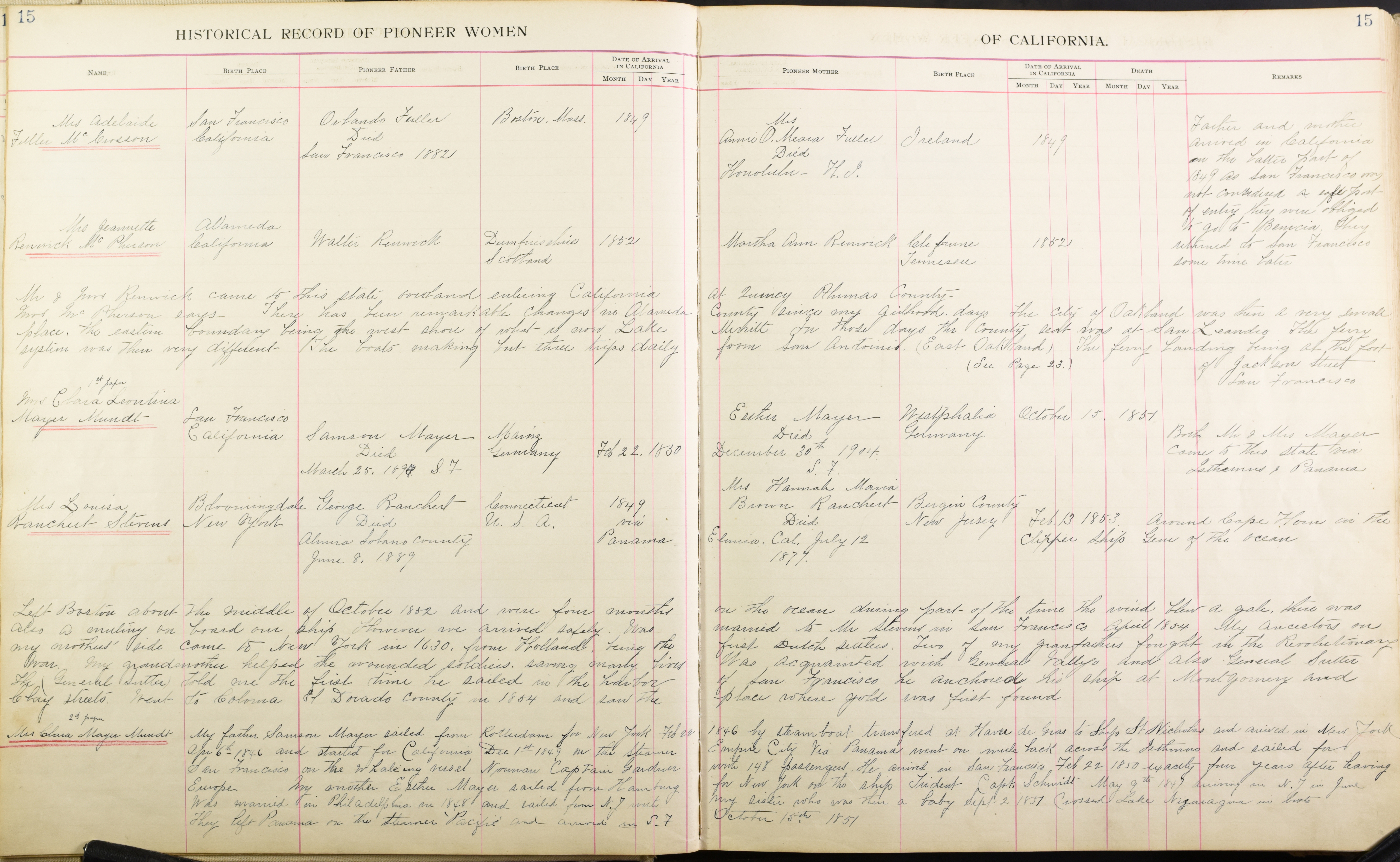 Remarks: Father and Mother arrived in California in the latter part of 1849 as San Francisco was not considered a safe port of entry they were obliged to go to Benicia. They returned to San Francisco some time later.

Remarks: Mr. and Mrs. Renwick came to this state overland entering California at Quincy Plumas County. Mrs. McPherson says – There has been remarkable changes in Alameda, County since my girlhood days. The city of Oakland was then a very small place. The eastern boundary being the west shore of what is now Lake Merritt. In those days the county seat was at San Leandro. The ferry system was then very different. The boats making but three trips daily from San Antonio (East Oakland) the ferry landing being at the foot of Jackson Street San Francisco.

Remarks:  Both Mr. and Mrs. Mayer came to this state via Isthmus of Panama.

Remarks: Left Boston about the middle of October 1852 and were four months on the ocean during part of the time the wind blew a gale, there was also a mutiny on board our ship. However we arrived safely. Was married to Mr. Stevens in San Francisco April 1854. My ancestors on my mothers’ side came to New York in 1630, from Holland, being the first Dutch settlers. Two of my granfathers [sic] fought in The Revolutionary War. My grandmother helped the wounded soldiers, saving many lives. Was acquainted with General Vallejo and also General Sutter. He (General Sutter) told me the first time he sailed in the harbor of San Francisco he anchored his ship at Montgomery and Clay Streets. Went to Coloma El Dorado County in 1854 and saw the place where gold was first found.

My father Samson Mayer sailed from Rotterdam for New York Feb 22 1846 by steamboat transferred at Havre de Gras to Ship St. Nicholas and arrived in New York Apr. 6th 1846 and started for California Dec. 1st 1849 on the Steamer Empire City via Panama went on mule back across the Isthmus and sailed for San Francisco on the whaling vessel Norman? Captain Gardner with 148 passengers. He arrived in San Francisco Feb 22 1850 exactly four years after leaving Europe. My mother Esther Mayer sailed from Hamburg for New York on the ship Trident Capt. Schmidt May 9th 1847 arriving in N.J. in June. Was married in Philadelphia in 1848 and sailed from N.J. with my sister who was then a baby Sept 2 1851. Crossed Lake Nicaragua in boats. They left Panama on the Steamer “Pacific” and arrived in S.F. October 15th 1851.