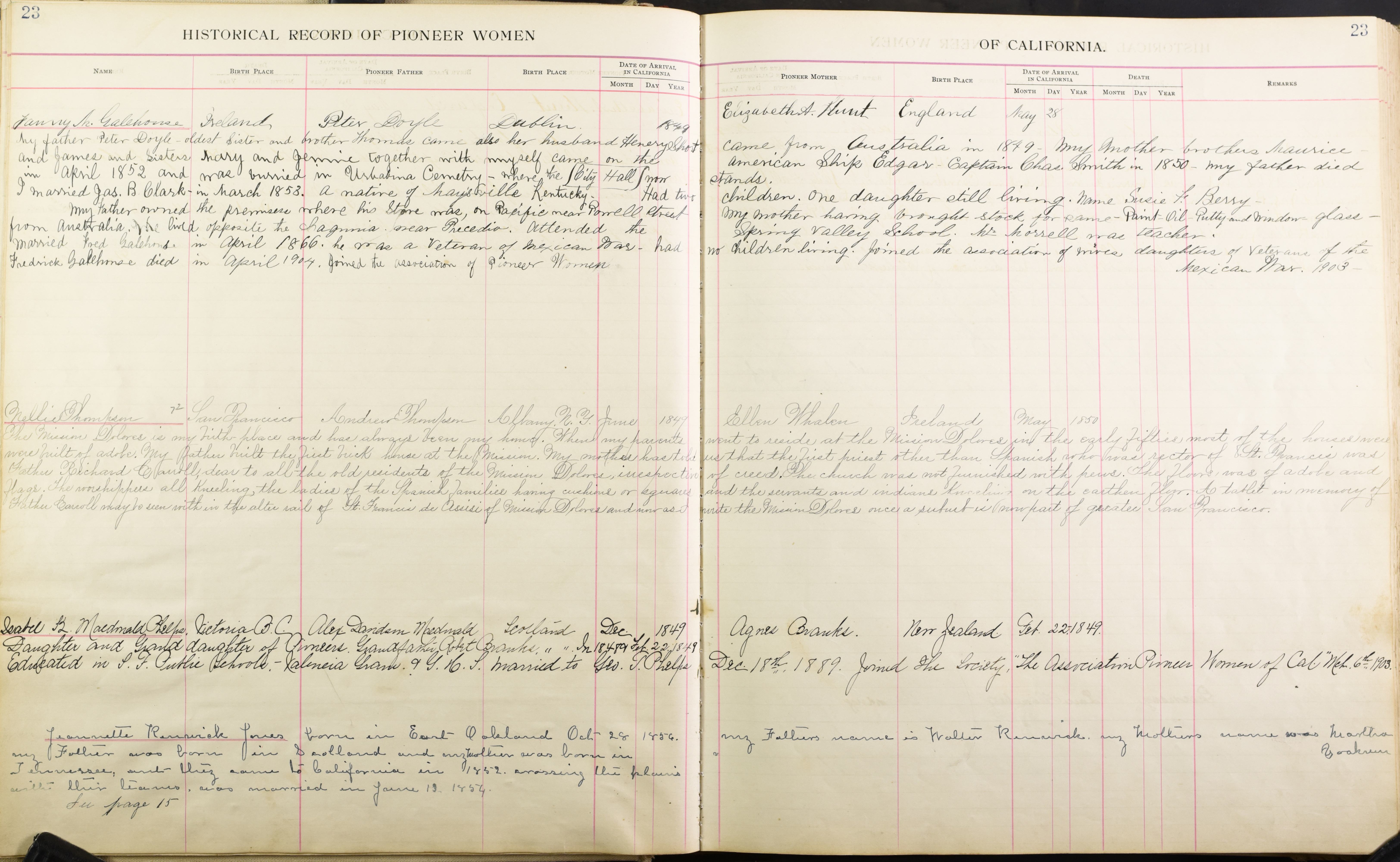 Remarks: My father Peter Doyle, oldest sister and brother Thomas came, also her husband Henry Short came from Australia in 1849 – My mother’s brothers Maurice and James and sisters Mary and Jennie together with myself came on the American ship Edgar Captain Chase Smith in 1850 – my father died in April 1852 and was buried in Urbana County where the city hall now stands. I married Jas B. Clark in March 1853. A native of Maysville Kentucky. Had two children, one daughter still living, name- Susie F. Berry. My father owned the premises where his store was, on Pacific near Powell street. My mother having brought stock for some Paint-Oil-Putty and Window glass- from Australia. He lived opposite the [illegible] near Precedio[sic]. Attended the Spring Valley School Mr. Harrell was teacher. Married Fred Galehouse in April 1866. He was a veteran of Mexican wars. Had no children living. Joined the Association of wives daughters of veterans of the Mexican Wars. 1903-
Frederick Galehouse died in April 1904. Joined the Association of Pioneer Women

Remarks: The Mission Dolores is my birth place and has always been my home. When my parents went to reside at the Mission Dolores. In the early fifties most of the houses were built of adobe. My father built the first brick house at the Mission. My mother has told us that the first priest other than Spanish who was rector of St. Francis was Father Richard Carroll, dear to all the old residents of the Mission Dolores, irrespective of creed. The church was not furnished with pews. The floors was of adobe and flags. The worshippers all kneeling, the ladies of the Spanish families having cushions or squares and the servants and Indians kneeling on the earthen floor. A tablet in memory of Father Carroll may be seen within the alter rail of St. Francis de Assisi of Mission Dolores and now as I write the Mission Dolores once a suburb is now part of greater San Francisco.

Remarks: My father’s name is Walter Renwick. My mother’s name was Martha Soakrum. My father was born in Scotland and my mother was born in Tennessee and they came to California in 1852 crossing the plains with their trains, was married in June 13, 1854.