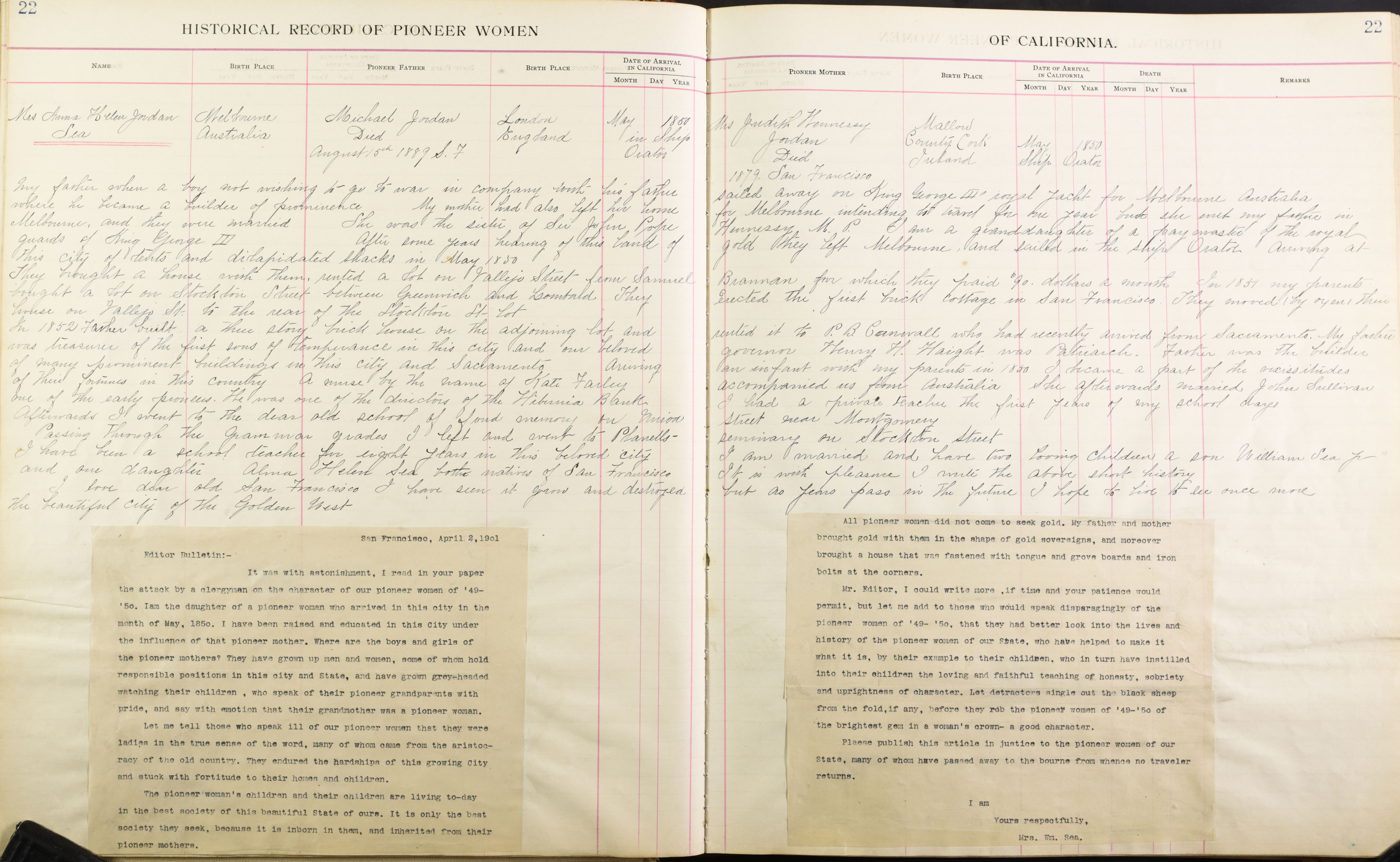 Remarks: My father when a boy not wishing to go to war in company with his father sailed away on King George III’s royal yacht for Melbourne, Australia where he became a builder of prominence. My mother had also left her home for Melbourne intending to travel for one year, but she met my father in Melbourne and they were married. She was the sister of Sir John Pope Hennessey M. P. I am a granddaughter of a pay master of the royal guards of King George III. After some years hearing of this land of gold, they left Melbourne, and sailed in the ship Orator. Arriving at this city of tents and dilapidated shacks in May 1850. They brought a house with them, rented a lot on Vallejo Street from Samuel Brannan for which they paid $90 dollars a month. In 1851 my parents bought a lot on Stockton Street between Greenwich and Lombard. They erected the first brick cottage in San Francisco. They moved (by oxen) their house on Vallejo St. to the rear of the Stockton St. lot. In 1852 father built a three story brick house on the adjoining lot and rented it to P.B. Cornwall who had recently arrived from Sacramento. My father was treasurer of the first sons of temperance in this city and our beloved governor Henry H. Haight was Patriarch. Father was the builder of many prominent buildings in this city and Sacramento. Arriving an infant with my parents in 1850 I became a part of the vicissitudes of their fortunes in this country. A nurse by the name of Kate Farley accompanied us from us from Australia. She afterwards married John Sullivan one of the early pioneers. He was one of the directors of the Hibernia Bank. I had a private teacher in the first years of my school days. Afterwards I went to the dear old school of fond memory on Main Street near Montgomery. Passing through the grammar grades, I left and went to Phanells’ Seminary on Stockton Street. I have been a school teacher for eight years in this beloved city. I am married I am married and have two loving children, a son William Sea, Jr. and one daughter Alina Helen Sea both natives of San Francisco. It is with pleasure I write the above short history. I love dear old San Francisco. I have seen it grow and destroyed, but as years pass,  in the future I hope to live to see once more the beautiful city of the Golden West.

It was with astonishment, I read in your paper the attack by a clergyman on the character of our pioneer women of ’49- ’50. I am the daughter of a pioneer woman who arrived in this city under the influence of that pioneer mother. Where are the boys and girls of the pioneer mothers? They have grown up men and women, some of whom hold responsible positions in this city and State, and have grown grey-headed watching their children, who speak of their pioneer grandparents with pride, and say with emotion that their grandmother was a pioneer woman. Let me tell those who speak ill of out pioneer women that they were ladies in the true sense of the word, many of whom came from aristocracy of the old country. They endured the hardships of this growing city and stuck with fortitude to their homes and children. The pioneer woman’s children and their children are living to-day in the best society of this beautiful state of ours. It is only the best society they seek, because it is inborn in them, and inherited from their pioneer mothers. All pioneer women did not come to seek gold. My father and mother brought gold with them in the shape of gold sovereigns, and moreover brought a house that was fastened with tongue and grove boards and iron bolts at the corners. Mr. Editor, I could write more, if time and your patience would permit, but let me add to those who would speak despairingly of the pioneer women of ’49 and ’50 of the brightest gem in a woman’s crown- a good character. Please publish this article in justice to the pioneer women of our State, many of whom have passed away to the bourne from whence no traveler returns.

I am
Yours Respectfully,
Mrs. Wm. Sea.