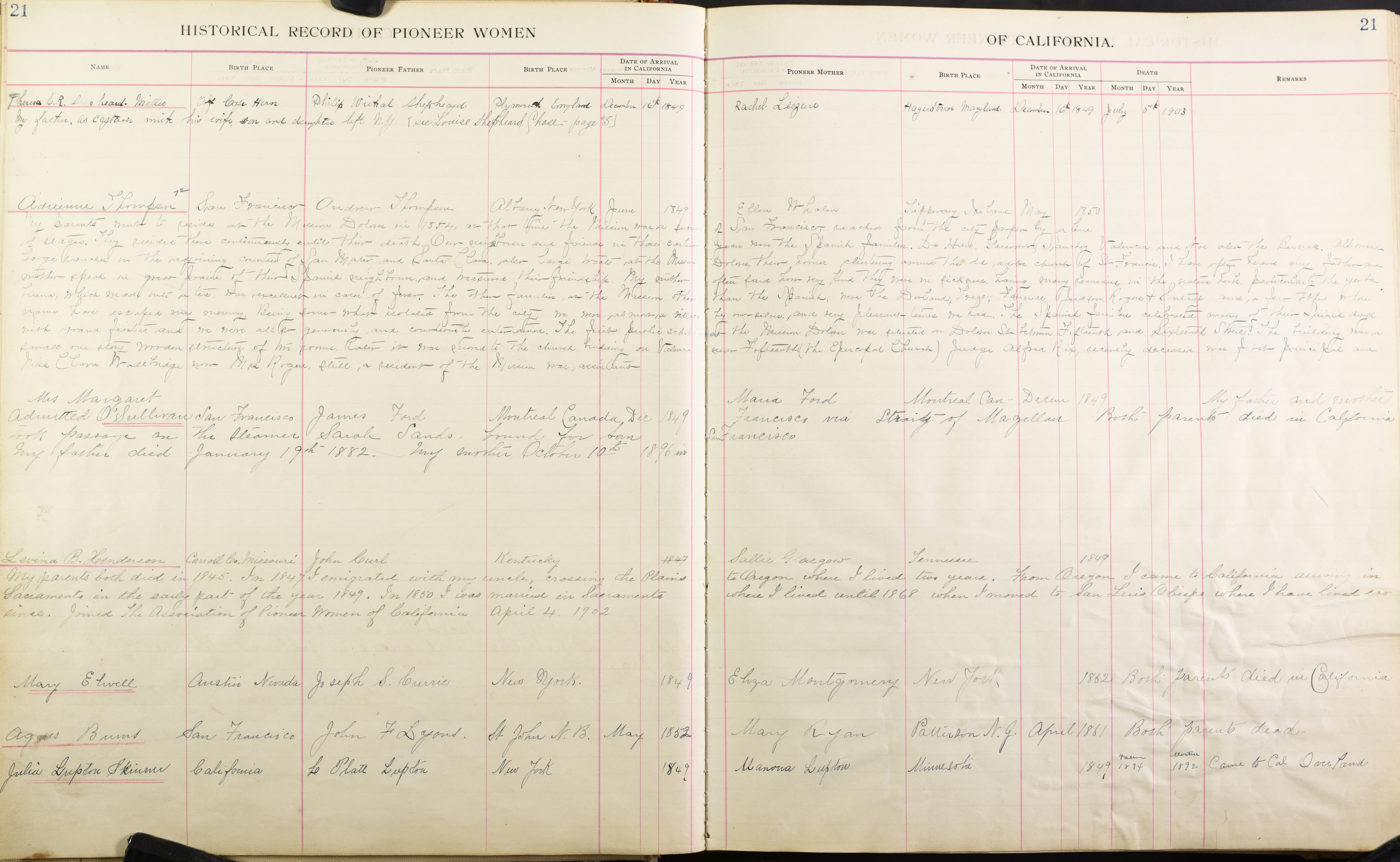 Remarks: My parents went to reside in the Mission Dolores in 1854. At that time the Mission was a feature of San Francisco, reached from the city proper by a line of stages. They resided there continuously until their death. Our neighbors and friends in those earlier years were the Spanish families, De Haro, Guerrero, Sanchez, Valencia, and Noe also the Bernals. All owned large ranches in the adjoining counties of San Mateo and Santa Clara, also large tracts. At the Mission Dolores, their homes clustering around the old, adobe church of St. Francis. I have often heard my father and mother speak in great praise of their Spanish neighbors and treasured their friendship. My mother often said how very kind they were in sickness, having many remedies in the native herbs, particularly the Yerba Buena, which made into a tea was excellent in cases of fever. The other families, in the Mission other than the Spanish, were the Donland, Trear, Fennell, Sutton, Rogers, & Sontagh, and a few others whose name have escaped my memory. Being somewhat isolated from the city, we were, almost, a village by ourselves, and very pleasant times we had. The Spanish families celebrated many of their Spanish days with grand fiestas and we were all so generously and courteously entertained. The first public school at the Mission Dolores was situated on Dolores Street between Fifteenth and Sixteenth streets. The building was a small one story wooden structure of two rooms. Later it was moved to the church building on Valencia near Fifteenth (The Episcopal Church). Judge Alfred Rix, recently deceased, was first principal and Miss Clara Wallridge now Mrs. Rogers, still a resident of the Mission was assistant.

Remarks: My father and mother took passage on the steamer Sarah Sands bound for San Francisco via Strait of Megellan. Both parents died in California. My father died January 19th, 1882. My mother October 10th, 1896 in San Francisco.

Remarks: My parents both died in 1845. In 1847 I immigrated with my uncle, crossing the Plains to Oregon where I lived two years. From Oregon I came to California arriving in Sacramento in the early part of the year 1849. In 1850 I was married in Sacramento where I lived until 1868 when I moved to San Luis Obispo where I have lived ever since. Joined the Association of Pioneer Women of California April 4, 1902.