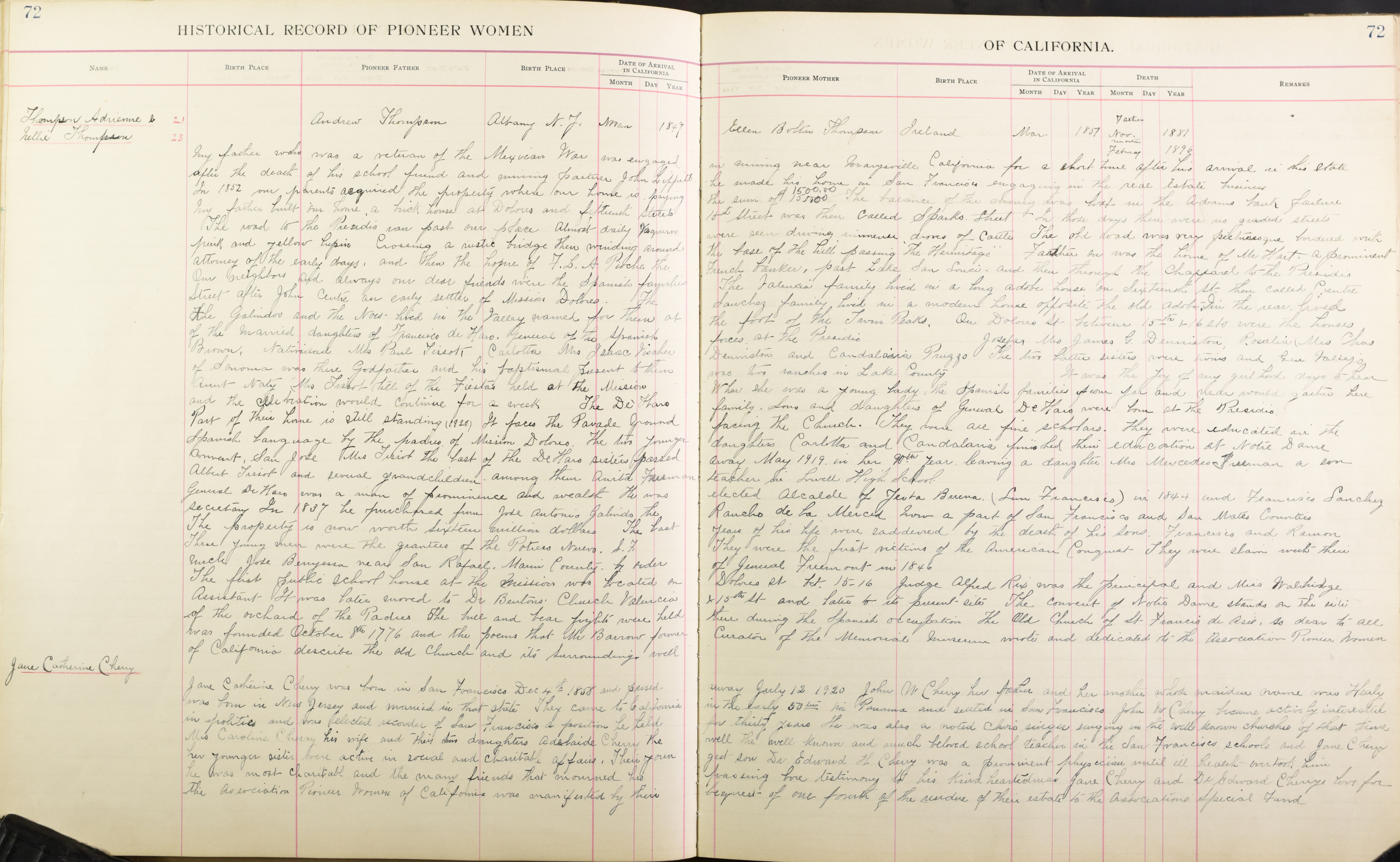 My father who was a veteran of the Mexican War was engaged in mining near Marysville California for a short time after his arrival in this state after the death of his school friend and mining partner John Lippitt. He made his home in San Francisco engaging in the real estate business.  In 1852 our parents acquired the property where our home is paying the sum of $1500.00.  The balance of the money was lost in the Adams bank failure.  My father built our home, a brick house at Dolores and fifteenth streets.  15th  18th Street was then called Sparks Street.  In those days there were no graded streets.  The road to the Presidio ran past our place  Almost daily Vaquerro were seen driving immense droves of cattle. The old road was very picturesque bordered with pink and yellow lupin.  Crossing a rustic bridge then winding around the base of the hill passing “The Hermitage”.  Farther on was the home of Mr. Hart, a prominent attorney of the early days, and then the home of F. L. A Pioche the French banker, past Lake San Souci and then through the Chapparel to the Presidio.  Our neighbors and always our dear friends were the Spanish families.  The Valencia family lived in a long adobe house on Sixteenth St. then called Centre Street after John Centre an early settler of Mission Dolores. The Sanchez family lived in a modern house opposite the old adobe. In the rear lived the Galindos and the Noes lived in the Valley named for them at the foot of the Twin Peaks. On Dolores St between 15th & 16 sts were the houses of the married daughters of Francisco de Haro, General of the Spanish forces at the Presidio. Josefa, Mrs. James G. Denniston, Rosalia (Mrs Chas Brown), Natividad Mrs. Paul Tissot, Carlotta Mrs Isaac Vischer Denniston and Candalaria Pruzzo.  The two latter sisters were twins and Gen Vallejo of Sonoma was there Godfather and his baptismal present to them was two ranches in Lake County. It was the Joy of my girlhood days to hear Aunt Naty Mrs Tissot tell of the Fiestas held at the Mission.  When she was a young lady, the Spanish families from far and near would gather here and the celebration would continue for a week.  The De Haro family, Sons and daughters of General De Haro were born at the Presidio. Part of their home is still standing (1920).  It faces the Parade Ground facing the Church. They were all fine scholars. They were educated in the Spanish language by the padres of Mission Dolores. The two younger daughters Carlotta and Candalaria finished their education at Notre Dame Convent, San Jose.  Mrs Tissot the last of the De Haro sisters passed away May 1919 in her 90th year leaving a daughter Mrs Mercedes Tillman a son Albert Tissot and several grandchildren among them Quita Freeman teacher in Lowell High School.

General De Haro was a man of prominence and wealth.  He was elected Alcalde of Yerba Buena (San Francisco) in 1844 and Francisco Sanchez secretary.  In 1837 he purchased from Jose Antonio Galindo the Rancho de la Merced now a part of San Francisco and San Mateo Counties.  The property is now worth sixteen million dollars.  The last years of his life were saddened by the death of his sons, Francisco and Ramon.  These young men were the grantees of the Potrero Nuevo, S.F.  They were the first victims of the American Conquest.  They were slain with their Uncle Jose Berryessa near San Rafael, Main County, by order of General Freemont in 1846.

The first public school house at the Mission was located on Dolores St bet. 15-16.  Judge Alfred Rix was the principal and Miss Walbridge Assistant.  It was later moved to Dr Bentons’ Church Valencia & 15th St and later to the its present site.  The convent of Notre Dame stands on the site of the orchard of The Padres.  The bull and bear fights were held there during The Spanish occupation.  The Old Church of St. Francis de Asie, so dear to all was founded October 8th 1776 and the poems that Mr Barrow former curator of The Memorial museum wrote and dedicated to the Association Pioneer Women of California describe the old church and its surroundings well.

Jane Catherine Cherry was born in San Francisco Dec 4th 1858 and passed away July 12 1920.  John W. Cherry her father and her mother whose maiden name was Healy was born in New Jersey and married in that state.  They came to California in the early 50ties via Panama and settled in San Francisco.  John W. Cherry became actively interested in politics and was elected recorder of San Francisco a position he held for thirty years.  He was also a noted choir singer singing in the well known churches of that time.  Mrs. Caroline Cherry his wife and their two daughters  Adelaide Cherry the well the well known and much beloved school teacher in the San Francisco schools and Jane Cherry her younger sister were active in social and charitable affairs. Their youngest son Dr. Edward H. Cherry was a prominent physician until ill health overtook him. He was most charitable and the many friends that mourned his passing bore testimony to his kind heartedness  Jane Cherry and Dr. Edward Cherry’s love for the Association Pioneer Women of California was manifested by their bequest of one fourth of the residue of their estate to the Associations Special Fund.