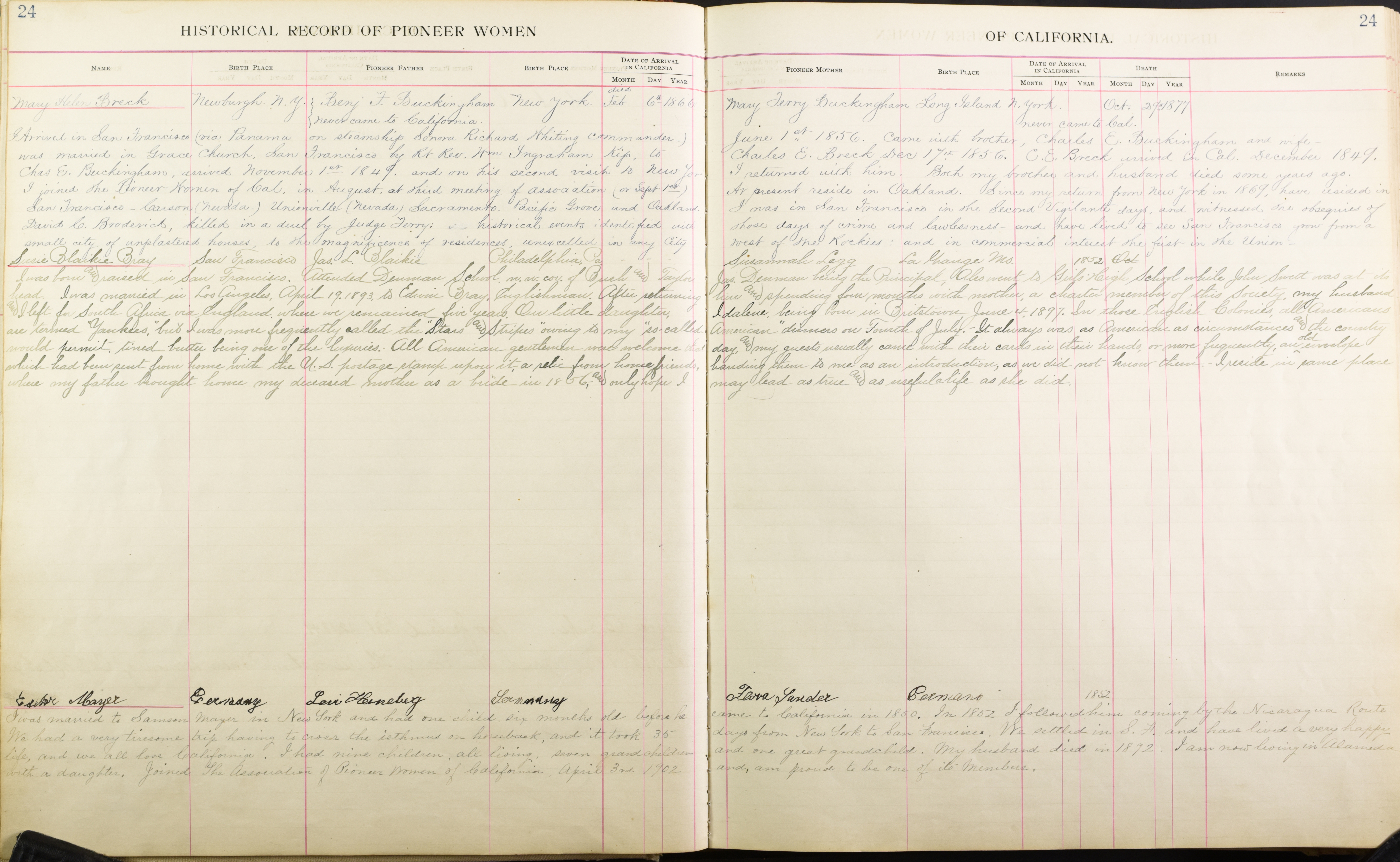 Remarks: Arrived in San Francisco (via Panama on steamship Sonora, Richard Whiting commander-) June 1st 1856. Came with brother, Charles E. Buckingham and wife – was married in Grace Church, San Francisco by Rt. Rev. Wm. Ingraham Kip. To Charles E. Breck Dec. 17th 1856. C.E. Breck. Arrived in Cal. December 1849. Chas E. Buckingham arrived November 1st 1849, and on his second visit to New York I returned with him. Both my brother and husband died some years ago. I joined the Pioneer Women of Cal. In August at third meeting of Association (on Sept. 1st). At present, reside in Oakland. Since my return from New York in 1869, have resided in San Francisco – Carson (Nevada), Unionville (Nevada), Sacramento, Pacific Grove and Oakland. I was in San Francisco in the Second Vigilante days, and witnessed one obsequies of David C. Broderick, killed in a duel by Judge Terry. Historical events identified with those days of crime and lawlessness – and have lived to see San Francisco grow from a small city of unplastered houses, to the magnificence of residences unexcelled in any city west of the Rockies; and in commercial interest the first in the Union

Remarks: I was born and raised in San Francisco. Attended Denman School n.w. cor. of Bush and Taylor, Jas. Denman being the Principal, Also went to Girls High School while John Swett was at its head. I was married in Los Angeles, April 19, 1893, to Edwin Bray, Englishman. After returning here and spending four months with mother, a charter member of this Society, my husband and I left for South Africa via England whence we remained five years. Our little daughter Idalene being born in Britstown, June 4, 1897. In those English Colonies, All Americans are termed “Yankees,” but I was more frequently called the “Stars and Stripes” owing to my “so-called American” dinners on Fourth of July. It always was as American as circumstances and the country would permit, tinned butter being one of the luxuries. All American gentlemen were welcome that day, and my guests usually came with their cards in their hands, or more frequently, an old envelope which had been sent from home with the U.S postage stamp upon it, a relic from housefriends, handing them to me as an introduction, as we did not know them. I reside in same place where my father brought home my deceased mother as a bride in 1856, and only hope I may lead as true and useful a life as she did.

I was married to Samson Mayer in New York and had one child, six months old before he came to California in 1850. In 1852 I followed him coming by the Nicaragua Route. We had a very tiresome trip having to cross the isthmus on horseback, and it took 35 days from New York to San Francisco. We settled in S.F and have lived a very happy life, and we all love California. I had nine children, seven grandchildren, and one great grandchild. My husband died in 1892. I am now living in Alameda with a daughter. Joined Association of Pioneer Women of California, April 3rd 1902 and proud to be one of its members.