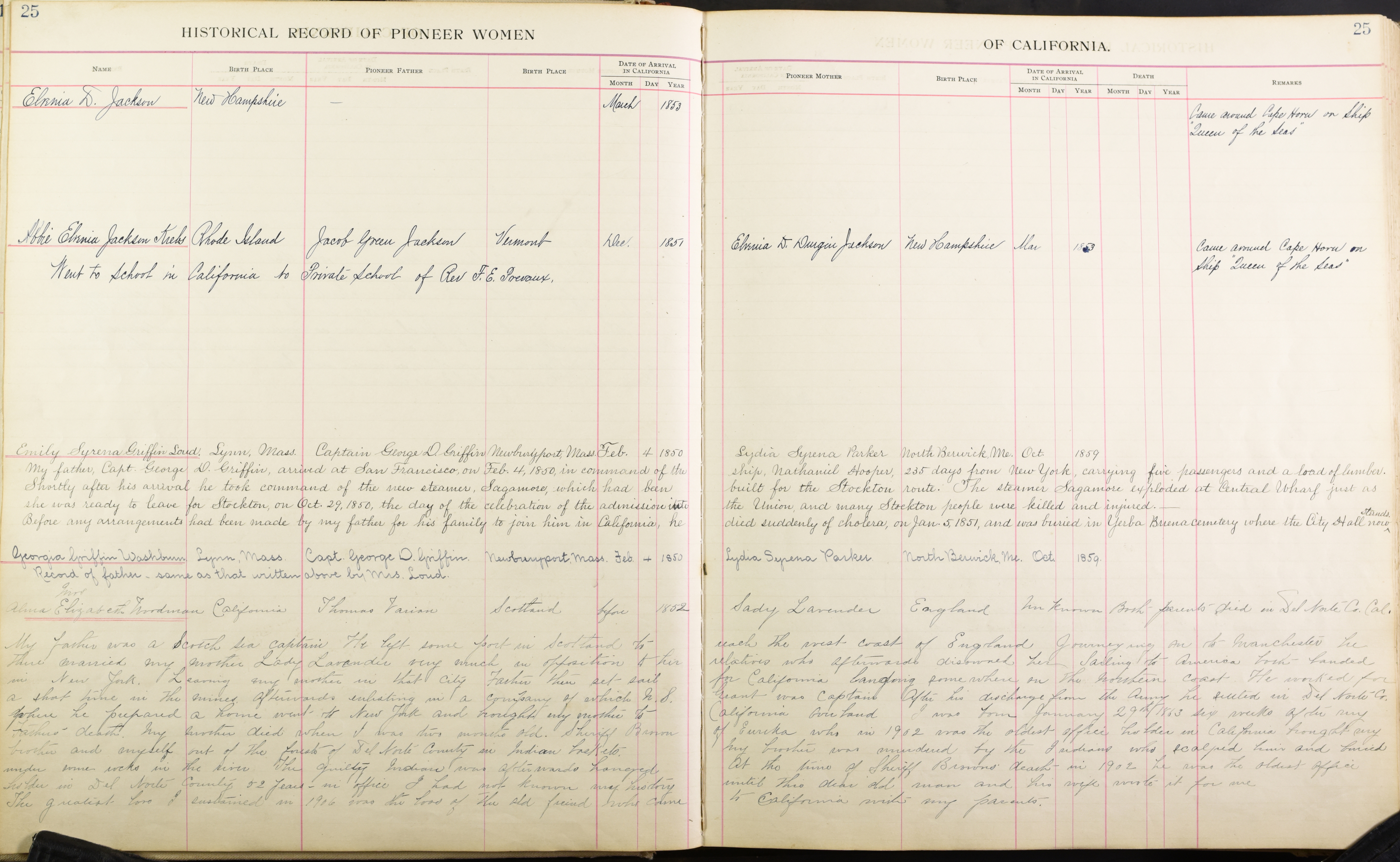 Remarks: Came around Cape Horn on Ship “Queen of the Seas”

Remarks: Came around Cape Horn on ship “Queen of the Seas”

Went to school in California to Private School of Rev. F.E. Prevaux

Remarks: My father, Capt. George D. Griffin, arrived at San Francisco on Feb. 4, 1850, in command of the ship, Nathaniel Stooper, 235 days from New York, carrying five passengers and a load of lumber. Shortly after his arrival he took the command of the new steamer, Sagamore, which had been built for the Stockton route. The steamer Sagamore exploded at Central Wharf just as she was ready to leave for Stockton, on October 29, 1850, the day of the celebration of the admission into the Union and many Stockton people were killed and injured. Before any arrangements had been made by my father for his family to join him in California, he died suddenly of cholera, on Jan 5, 1851, and was buried in Yerba Buena cemetery where the City S.F St. all stands now.

Remarks: Record of father- same as that written above by Mrs. Loud.

Remarks: My father was a Scotch sea captain. He left some port in Scotland to reach the west coast of England. Journeying on to Manchester. He there married my mother Lady Lavender very much in opposition to her relations who afterwards disowned her. Sailing to America both landed in New York. Leaving my mother in that city. Father then set sail for California landing somewhere on the northern coast. He worked for a short time in the mines, afterwards enlisting in a company of which U.S. Grant was Captain. After his discharge from the Army, he settled in Del. Norte Co. where he prepared a home, went to New York and brought my mother to California overland. I was born January 29, 1863 six weeks after my father’s death. My mother died when he was two months old. Sherriff [sic] Brown of Eureka who in 1902 was the oldest office holder in California brought my brother and myself out of the forests of Del Norte County in Indian baskets. My brother was murdered by the Indians who scalped him and buried under some rocks in the river. The guilty Indian was afterwards hanged. At the time of Sheriff Brown’s death in 1902 he was the oldest office holder in Del Norte County 52 years in office. I had not known my history until this dear old man and his wife wrote it for me. The greatest loss I sustained in 1906 was the loss of the old friend who came to California with my parents.