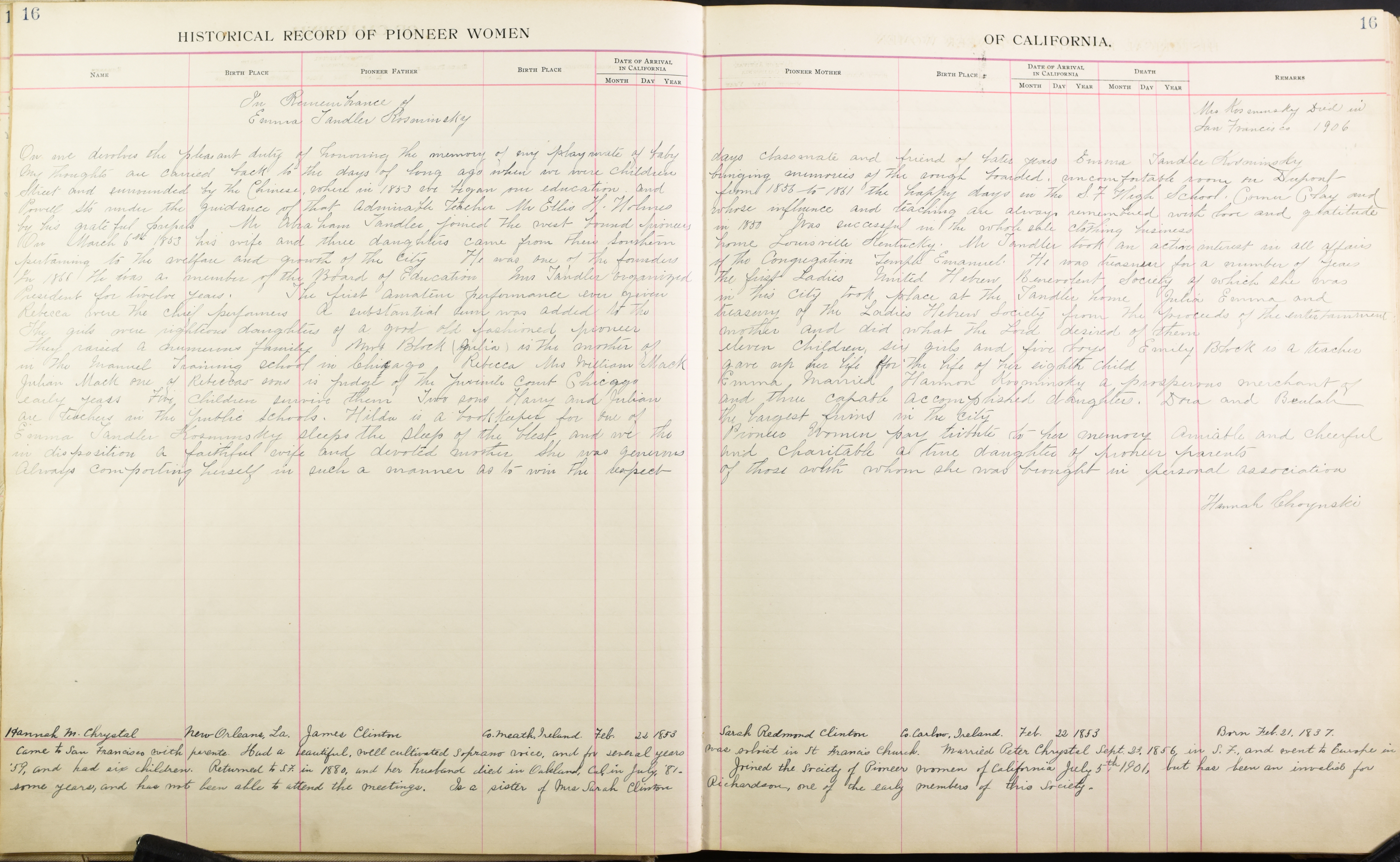 In Remembrance of Emma Sandler Koseninsky. On me devolves the pleasant duty of honoring the memory of my playmate of baby days, classmate and friend of later years Emma Sandler Koseninsky. My thoughts are carried back to the days of long ago when we were children bringing memories of the rough boarded, uncomfortable room on Dupont Street and surrounded by the Chinese, where in 1853 we began our education and from 1856 to 1861the happy days in the S. F high school, corner Clay and Powell Sts under the guidance of that admirable teacher Mr. Ellis H. Holmes whose influence and teaching are always remembered with love and gratitude by his grateful pupils. Mr. Abraham Sandler joined the westbound pioneers in 1850. Was successful in the wholesale clothing business. On March 6th, 1863 his wife and three daughters came from their southern home, Louisville, Kentucky. Mr. Sandler took an active interest in all affairs pertaining to the welfare and growth of the city. He was one of the founders of the Congregation Temple Emmanuel. He was treasurer for a number of years. In 1866 he was a member of the Board of Education. Mrs. Sandler organized the first Ladies United Hebrew Benevolent Society of which she was President for twelve years. The first amateur performance ever given in the city took place at the Sandler home. Julia, Emma, and Rebecca were the chief performers. A substantial sum was added to the treasury of the Ladies Hebrew Society from the proceeds of the entertainment. The girls were righteous daughters of a good old fashioned pioneer mother and did what the Lord desired of them. They raised a numerous family. Mrs. Black (Julia) is the mother of eleven children, six girls and five boys. Emily Black is a teacher in the Manuel Training school in Chicago. Rebecca, Mrs. William Mack gave up her life for the life of her eighth child. Julian Mack, one of Rebecca’s sons is Judge of the Juvenile Court Chicago. Emma married Harmon Rosminsky, a prosperous merchant of early years. Five children survive them. Two sons Harry and Julian and three capable, accomplished daughters. Dora and Bulah are teachers in the public schools. Hilda is a bookkeeper for one of the largest firms in the city. Emma Sandler Krominsky sleeps the sleep of the blest and We the Pioneer Women pay tribute to her memory. Amiable and cheerful in both disposition a faithful wife and devoted mother. She was generous and charitable. A fine daughter of pioneer parents. Always comporting herself in such a manner as to win the respect of those with whom she was brought  in personal association

Came to San Francisco with parents. Had a beautiful, well cultivated Soprano voice, and for several years was soloist in St. Francis Church. Married Peter Chrystal September 23, 1856 in S.F. and went to Europe in ’59, and had six children. Returned to S.F. in 1880, and her husband died in Oakland, Cal. In July, ’81. Joined the Society of Pioneer Women of California July 5th 1901, but has but has been an invalid for some years, and has not been able to attend the meetings. Is a sister of Mrs. Sarah Clinton Richardson, one of the early members of this society.