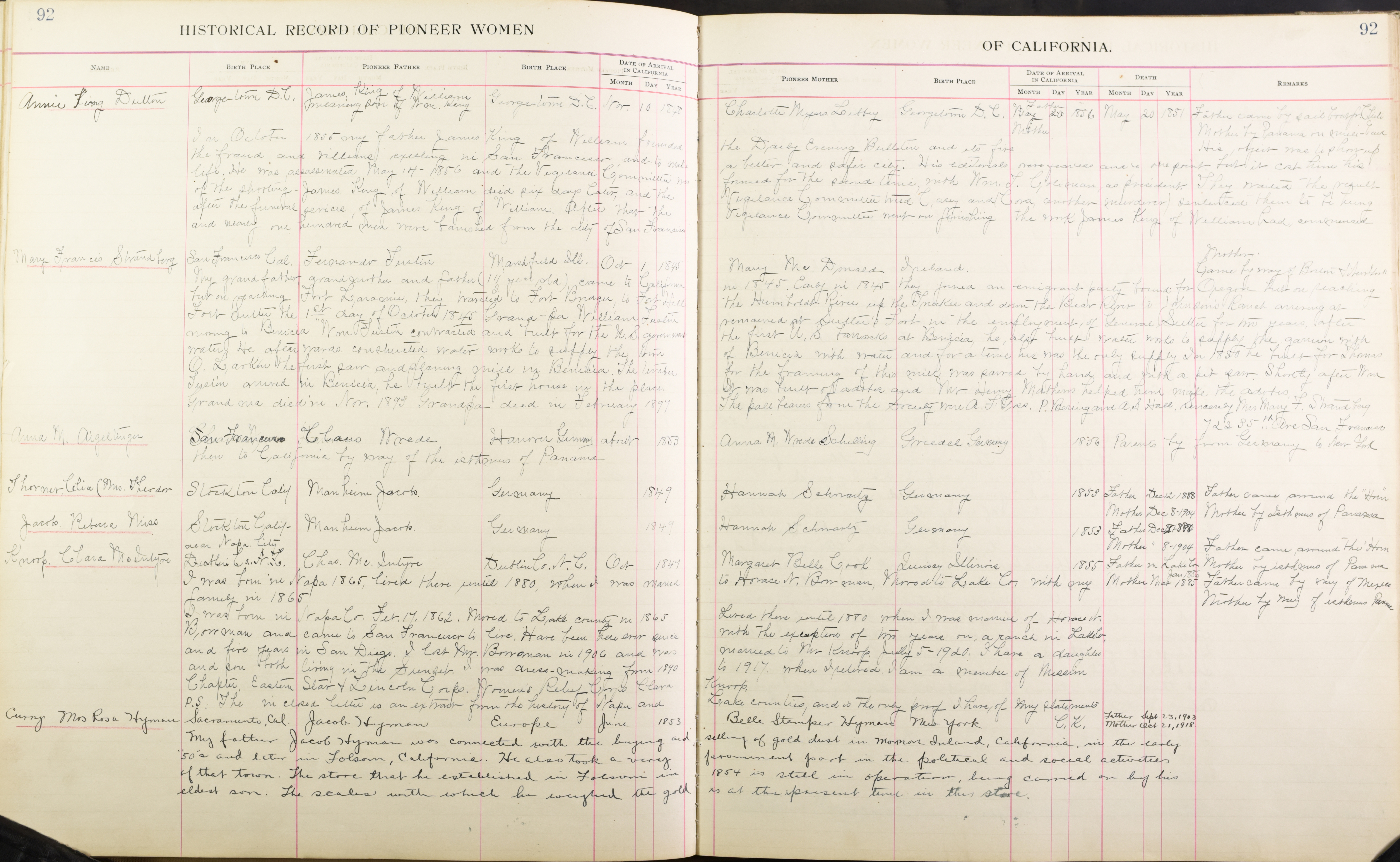 My grandfather, grandmother, and father (1 ½  year old) came to California in 1845. Early in 1845 they joined an emigrant party bound for Oregon but on reaching but on reaching Fort Laramie, they traveled to Fort [illegible], to Fort Hill, the Humboldt River, up the Truckee, and down the Bear River to Johnson’s Ranch, arriving at Fort Sutter the 1stday of October 1845. Grandpa William Justin remained at Sutter’s Fort in the employment of General Sutter for two years, after moving to Benicia W. Justin contracted and built for the U.S. government the first U.S. barracks at Benicia, he, also built water works to supply the garrison with water. He afterwards constructed water works to supply the town of Benicia with water and for a time he was the only supply. In 1850 he built for Thomas O. Larkin the first saw and planing mill in Benicia. The timber for the framing of this mill was sawed by hand and with a pit saw. Shortly after Wm Justin arrived in Benicia, he built the first house in the place. It was built of [illegible] and Mr. Henry Mathers helped him make the [illegible]. Grandma died in Nov. 1893. Grandpa died in February 1897. The pall bearers from the Society were A. F. [illegible], P. Bering and A. S. Hall. Sincerely, Mrs. Mary F. Strandberg.

Remarks: Parents by from Germany to New York then to California by way of the isthmus of Panama.

Remarks: Father came around the “Horn.” Mother by Isthmus of Panama.

Remarks: Father came around the “Horn.” Mother by Isthmus of Panama.

Remarks: Father came by way of Mexico. Mother by way of Isthmus Panama.

I was born in Napa Co. Feb. 17, 1862. Moved to Lake county in 1865. Lived there until 1880 when I was married of Horace N. Bowman and came to San Francisco to live. Have been here ever since with the exception of two years on a ranch in Lake Co. and five years in San Diego. I lost Mr. Bowman in 1906 and was married to Mr. Knoop July 5 – 1920. I have a daughter and son, both living in the Sunset. I was dress-making from 1890 to 1914, when I retired. I am a member of the Mission Chapter, Eastern Star and Lincoln Corps. Women’s [illegible] Corps. Clara Knoop.

P.S. the inclosed [sic] letter is an extract from the history of Napa and Lake counties, and the only proof I have of my statements.

Remarks: My father Jacob Hyman was connected with the buying and selling of gold dust in Mormon Island, California, in the early ‘50s and later in Folsom, California. He also took a very prominent part in the political and social activities of that town. The store that he established in Folsom in 1854 is still in operation, being carried on by his eldest son. The [illegible] with which he bought the gold is at the present time in the store.