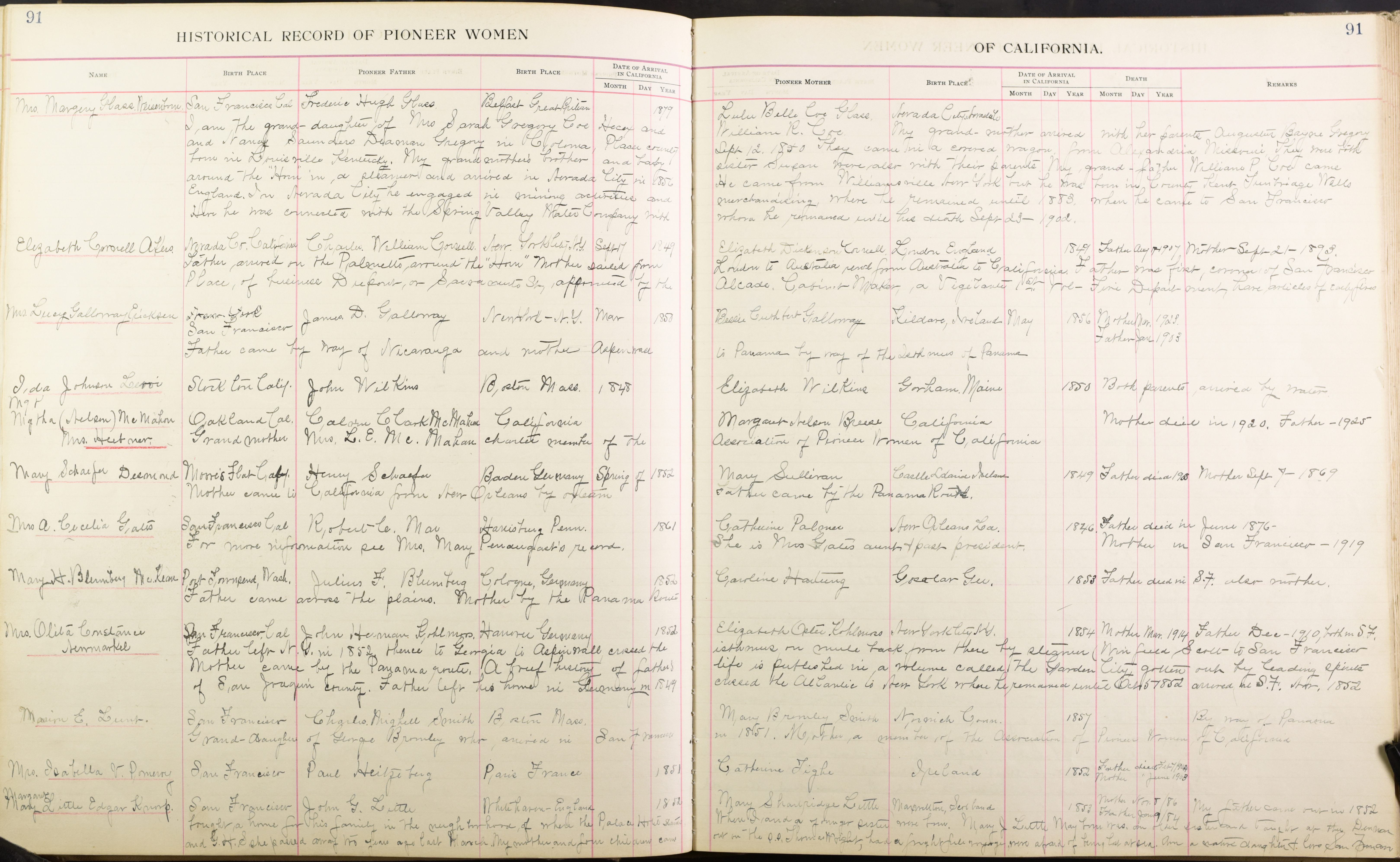 Remarks: I am the grand-daughter of Mrs. Sarah Gregory Coe Hecox and William R. Coe. My grand-mother arrived with her parents Augustus Bayne Gregory and Nancy Saunders Deaman Gregory in Coloma, Placer County Sept 12, 1850. They came in a covered wagon from Alexandria Missouri. They were both born in Louisville Kentucky. My grandmother’s brother and baby sister Susan were also with their parents. My grand-father William P. Coe came around the “Horn” in a steamer and arrived in Nevada City in 1856. He came from Williamsville New York but he was born in County Kent Tunbridge Wells England. In Nevada City he engaged in mining activities and merchandising where he remained until 1883, when he came to San Francisco. Here he was connected with the Spring Valley Water Company with whom he remained until his death Sept 23 – 1902.

Remarks: Father arrived on the Palmetto around the “Horn.” Mother sailed from London to Australia and from Australia to California. Father was first coroner of San Francisco. Place of business Dupont, or Sacramento St., appointed by the Alcade Cabinet maker, a Vigilante, [illegible] Fire Department, have articles of early fires.

Remarks: Father came by way of Nicaragua and mother Aspenwall to Panama by way of the Isthmus of Panama.

Remarks: Both parents arrived by water.

Remarks: Mother came to California from New Orleans by oxteam. Father came by the Panama Route.

Remarks: Father came across the plains. Mother by the Panama Route.

Remarks: Father left N.Y. in 1852 thence to Georgia to Aspinwall, crossed the isthmus on mule pack, from there by steamer ([illegible] Scott to San Francisco. Mother came by the Panama route. A brief history of father’s life is published in a volume called The Garden City, gotten out by leading spirits of San Joaquin county. Father left his home in Germany in 1849, crossed the Atlantic to New York where he remained until Oct 5, 1852, arrived in S.F. Nov. 1852.

Remarks: Grand-daughter of George Brumley who arrived in San Francisco in 1851. Mother, a member of the Association of Pioneer Women of California.

Remarks: My father came out in 1852, bought a home for his family in the neighborhood, of where the Palace Hotel stands. Where I, and a younger sister were born. Mary J. Little Mayborn was an older sister and taught at the [illegible] and G.H. She passed away two years ago last March. My mother and four children came out on the s.s. Thomas Woight, had a frightful voyage, were afraid of being lost at sea. Am a native daughter and live San Fran.