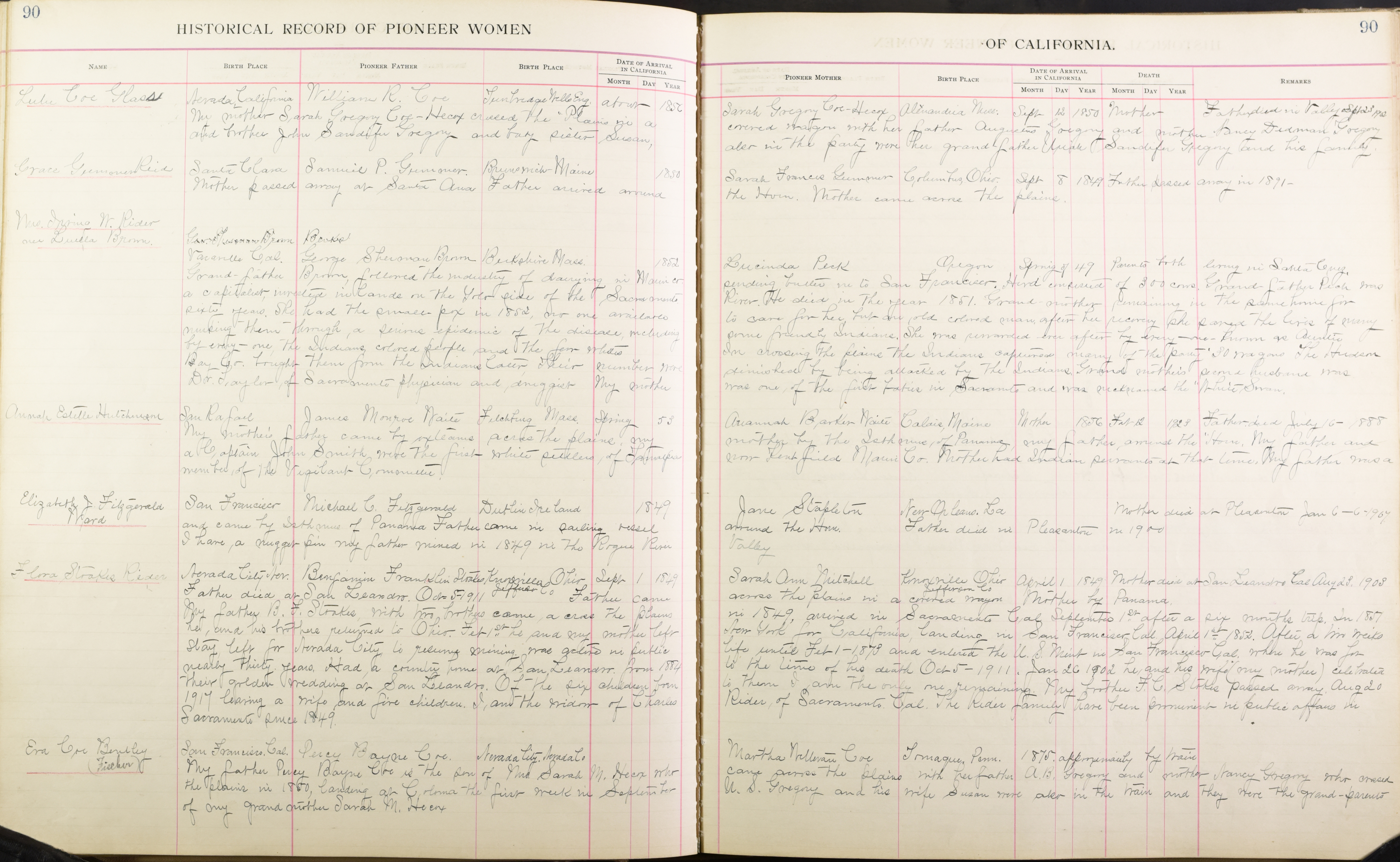 Remarks: Father arrived around the Horn. Mother came across the plains.

Remarks: Grand-father Brown followed the industry of dairying in Marin co. sending butter in to San Francisco. Herd consisted of 300 cows. Grand father Peck was a capitalist wrested inlands on the [illegible] side of the Sacramento River. He died in the year 1851. Grand-mother remaining in the same home for sixty years. She had the small pox in 1852, no one available to care for her but an old colored man. After her recovery she saved the lives of many nursing them through a serious epidemic of the disease, including some friendly Indians. She was rewarded ever after by every-one. Known as Auntie by every-one, the Indians, colored people and the [illegible]. In crossing the plains the Indians captured many of the party 30 wagons. The Hudson Bay Co. bought them from the Indians [illegible], their number more diminished by being attacked by the Indians. Grand mother’s second husband was Dr. [illegible] of Sacramento physician and [illegible]. My mother was one of the first ladies in Sacramento and was nicknamed the “White Swan.”

My mother’s father came by ox teams across the plains, my mother b ythe Isthmus of Panama, my father across the Horn. My father and a Captain John Smith were the first white settlers of Tamalpia [sic] now Kentfield Marin Co. Mother had Indian servents at that time. My father was a member of the Vigilant Committee.

Remarks: Mother died at Pleasanton Jan 6, 1904 and by Isthmus of Panama. Father came in sailing vessel around the Horn. Father died in Pleasanton in 1900. I have a nugget pin my father mined in 1849 in the Rogue River Valley.

Remarks: My father B.J. Stoakes with his brothers came across the plains in 1849, arrived in Sacramento Cal September 1stafter a six months trip. In 1851 he and his brothers returned to Ohio. Feb 1sthe and my mother left from York for California, landing in San Francisco Cal. April 1st1852. After a [illegible] weeks stay left for Nevada City to [illegible] mining [illegible] [illegible] in public life until Feb 1 1873 and entered the U.S. Mint in San Francisco Cal where he was for nearly thirty years. Had a country home at San Leandro from 1884 to the time of his death Oct 5 1911. Jan 26 1902 he and his wife (my mother) celebrated their golden wedding at San Leandro. Of the six children born to them I am the only one remaining. My brother F.G. Stoakes passed away Aug 20 1917 leaving a wife and five children. I am the widow of Charles Rider of Sacramento Cal. The rider family have been prominent in the public affairs in Sacramento since 1849.

Remarks: My father Percy Bayne Coe is the son of Mrs. Sarah M. Hecox who came across the plains with her father A.B. Gregory and mother Nancy Gregory who crossed the plains in 1850, landing at Coloma the first week in September. U.S. Gregory and his wife Susan were also in the train and they were the grand-parents of my grand mother Sarah M. Hecox.