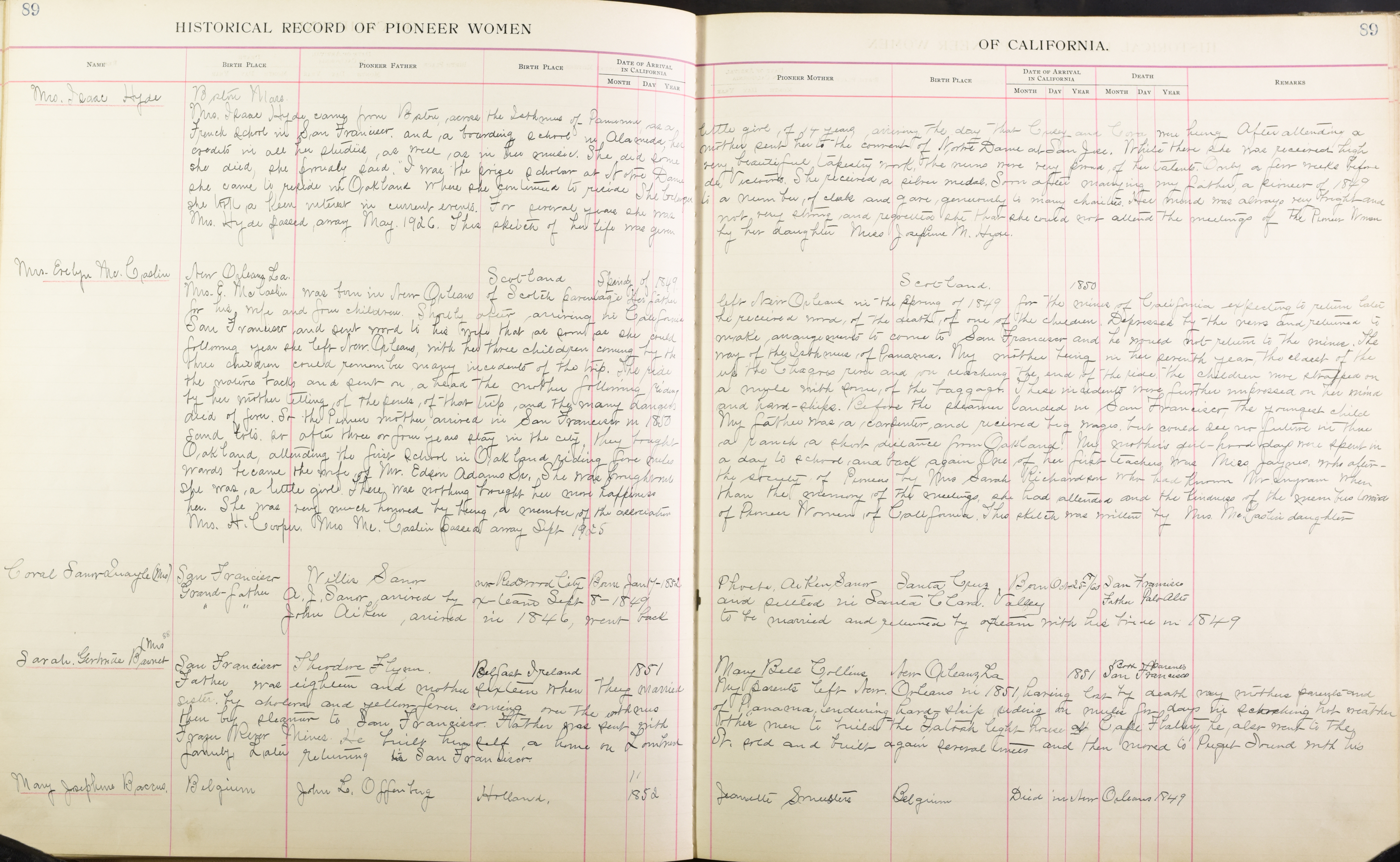 Remarks: Mrs. Isaac Hyde came from Boston, across the Isthmus of Panama, as a little girl, of 14 years, arriving the day that [illegible]and Cora were hung. After attending a French school in San Francisco, and a boarding school in Alameda, her mother sent her tothe convent of Nortre Dame at San Jose. While there she was perceived high credits in all her studies, as well as in her music. She did some very beautiful tapestry work, the nuns were very proud of her talents. Only a few weeks before she died, she [illegible]said “I was the prize scholar at Notre Dame de Victoires. She received a silver medal. Soon after marrying my father, a pioneer of 1849, she came to reside in Oakland where she continues to reside. She belonged to a number of clubs and gave generously to many charities. Her mind was always very high and she took a keen interest in current events. For several years she was not very strong, and regretted she that she could not attend the meetings of the Pioneer Women.

Mrs. Hyde passed away May 1926. This sketch of her life was given by her daughter Miss Josephine M. Hyde.

Remarks: Mrs. E. Mclaskin was born in New Orleans of Scotch heritage. Her father left New Orleans in the spring of 1849 for the mines of California expecting to return later for his wife and four children. Shortly after arriving in California he received word of the death of one of the children. Depressed by the news and returned to San Francisco, and sent word to his wife that as soon as she could make arrangements to come to San Francisco and he would not return to the mine. The following year she left New Orleans, with her three children coming by the way of the Isthmus of Panama. My mother being in her seventh year, the eldest of the three children, could remember many incidents of the trip. The ride up the Chagres river and on reaching the end of the ride the children were strapped on the natives backs and sent on a head [sic] the mother following riding a mule with some of the baggage. These incidents were further impressed on her mind by her mother telling of the perils of that trip, and the many dangers and hard-ships. Before the steamerlanded in San Francisco, the youngest child died of fever. So the Pioneer mother arrived in San Francisco in 1850. My father was a carpenter and received big wages, but could see no future in these sand lots. So after three or four years stay in the city, they bought a ranch, a short distance from Oakland. My mother’s girl-hood days were spent in Oakland, attending the first school in Oakland riding five miles a day to school, and back again. One of the first teachers was Miss Jaynes who after-wards became the wife of Mr. Eden Adams Sr. She was[illegible]the society of Pioneers by Mrs. Sarah Richardson who had known Mrs. Ingram when she was a little girl. There was nothing brought her more happiness than the memory of the meetings she had attended and the kindness of the members [illegible]her. She was very much honored by being a member of the association of Pioneer Women of California. This sketch was written by Mrs. McCaslin daughter Mrs. H. Cooper. Mrs. McCaslin passed away Sept 1925

Remarks: Grandfather A.J. Sanov arrived by ox-team Sept 8 1849 and settled in Santa Clara Valley.
[Grandfather] John AiKen, arrived in 1846, went back to be married and returned by oxteam with his bride in 1849.

Remarks: Father was eighteen and mother sixteen when they married. My parents left New Orleans in 1851, having loss by death my mothers parents and sister by cholera and yellow fever. coming over the isthmus of Panama, enduring hard-ship riding on mules for days in scorching hot weather then by steamer to San Francisco. Father was sent with other men to build the Tatoosh light house of Cape Flattery, he, also went to the Frazer River Mines. He built himself a home on Lombard St. sold and built again several times and then moved to Puget Sound with his family. Later returning to San Francisco.