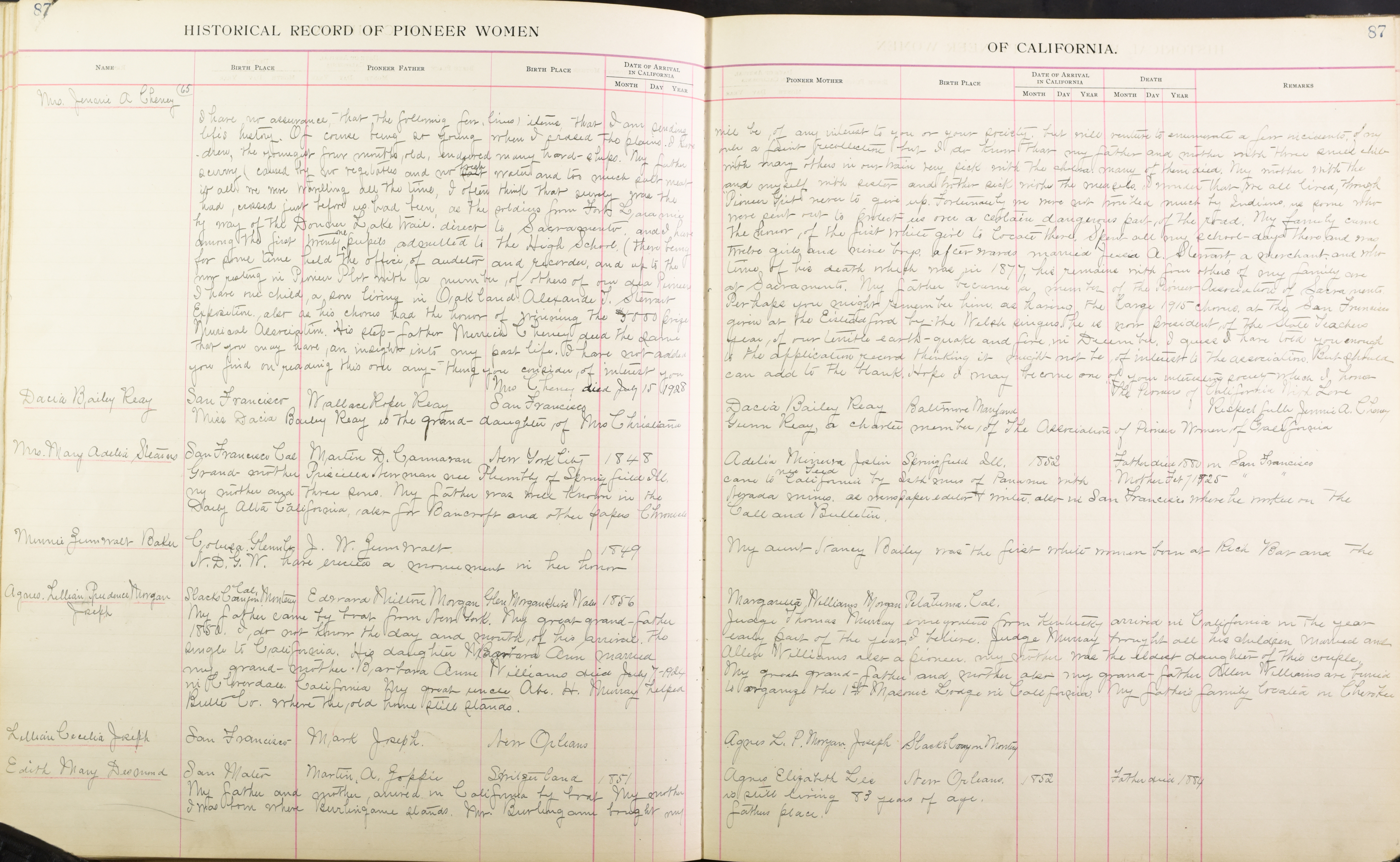 I have no assurance that the following few lines, items that I am sending will be of any interest to you or your society. But [illegible] will venture to enumerate a few incidents of my life’s history. Of course being so young when I crossed the plains. I have only a faint recollection but I do know that my father and mother with three small chil-dren, the youngest four months old, endured many hard-ships. My father with many others in our train very sick with the cholera. many of them died. My mother with the scurvy caused by our vegetables and no high water and too much pork [illegible] meat and myself with sister and brother sick with the measels [sic]. I wonder that we all lived, though is all we were travelling [sic] all the time, I often think that surely was the “Pioneer Spirit” never to give up. Fortunately we were not troubled much by Indians, us some [illegible] who had, crossed just before us had been, as the soldiers from Fort Laramie were sent out to protect us over a certain dangerous part of the road. My family came by way of the Doudrer Lake trail direct to Sacramento, and I have the honor of the first white girl to locate there. Spent all my school days there and was among the first twenty pupils admitted to the High School there being twelve girls and nine boys. afterwards married Jessie A. Stewart, a merchant and who for some time held the office of auditor and recorder, and up to the time of his death which was in 1877, his remains with four others of my family are now resting in Pioneer Plot with a number of others of our [illegible] Pioneers of Sacramento. My father became a member of the Pioneer Association of Sacramento. I have one child, a son living in Oakland Alexander T. Stewart. Perhaps you might remember him as having the large 1915 chorus at the San Francisco Exposition, also as his chorus had the honor of winning the $5000 prize given at the Eisledad [illegible] by the Welsh singers. He is now president of the State Teachers Musical Association. His step-father Merrick Cheney died the same year, of our terrible earh-quake and fire in December. I guess I have told you enough that you may have an insight into my past life. I have not added to the application record thinking it might not be of interest to the association. But should you find on reading this over any-thing you consider of interest you can add to the blank. Hope I may become one of your interesting society – which I honor The Pioneers of California With Love
Respectfully Jennie A. Cheney

Remarks: Miss Dacia Bailey Reay is the grand-daughter of Mrs. Christiana Gunn Reay, a charter member of The Association of Pioneer Women of California

Remarks: Grand-mother Priscilla Newman nee [illegible] Hembly [illegible] of Springfield Ill. came to California by Isthmus of Panama with my mother and three sons. My father was well known in the Nevada mines as newspaper editor and writer. also in San Francisco where he worked on the Daily Alta California, also for Bancroft and other papers Chronicle Call and Bulletin.

Remarks: My aunt Nancy Bailey was the first white woman born at Rich Bar and the N.D.G.W.  have erected monument in her honor

Remarks: My father came by boat from New York. My great grand-father Judge Thomas Murray emigrated from Kentucky arrived in California in the year 1850. I do not know the day and month of his arrival. The early part of the year, I believe. Judge Murray brought all his children married and single to California. His daughter Barbara Ann married Allen Williams also a pioneer. my mother was the eldest daughter of this couple. my grand-mother Barbara Anne Williams died July 7 1924. My great grand-father and mother also my grand-father Allen Williams are buried in Cloverdale California. My great uncle Abe H. Murray helped to organize the 1stMasonic Lodge in California. My father’s family located in Cherokee Butte Co. where the old home still stands.

Remarks: My father and mother arrived in California by boat. My mother is still living 83 years of age.

I was born where Burlingame stands. Mrs. Burlingame bought my fathers place.