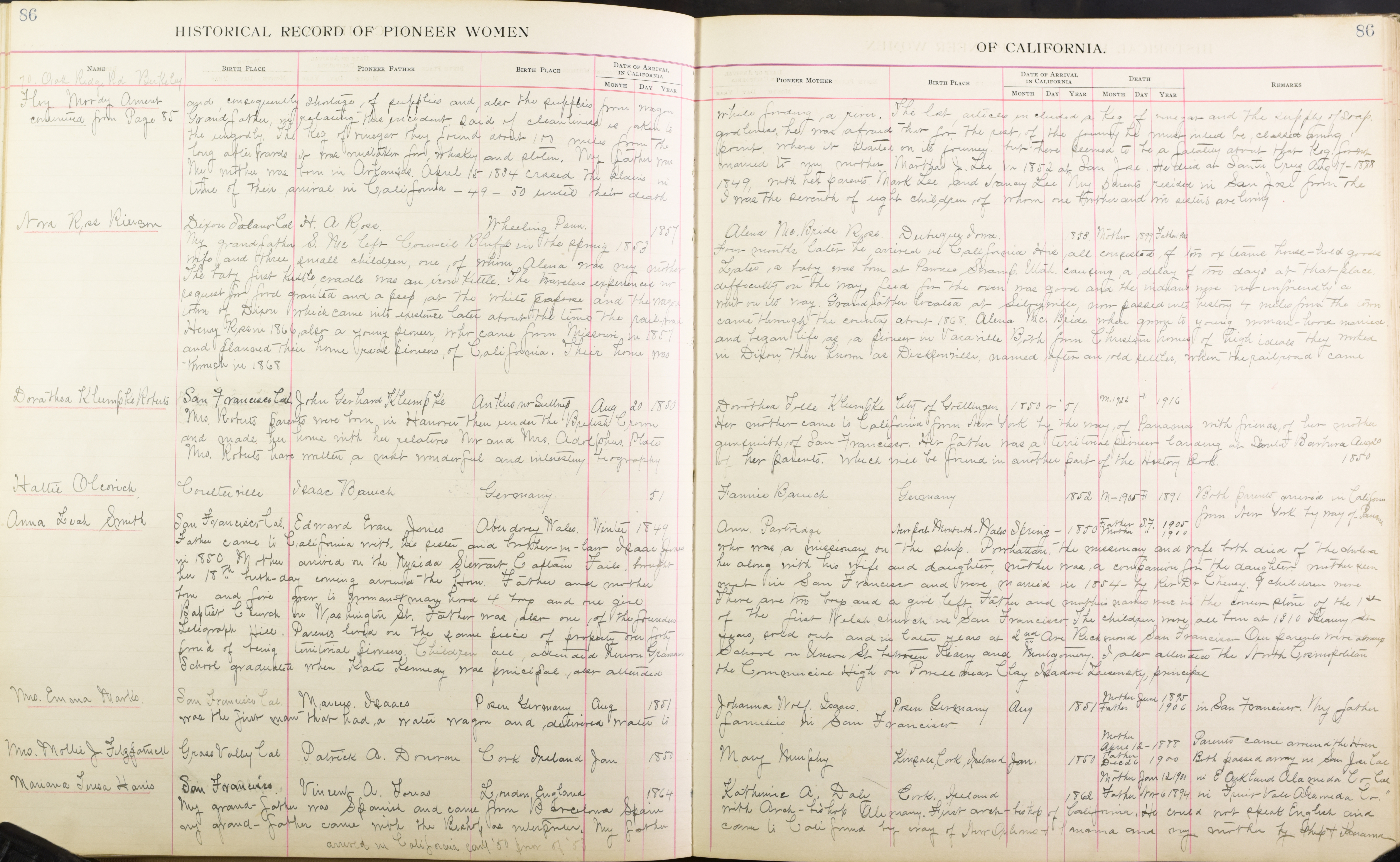 and, consequently shortage of supplies and, also the supplies from wagon while fording a river. The lost articles included a keg of vinegar and the supply of soap. Grandfather, in relating this incident said if cleanliness is akin to godliness, he was afraid that for the rest of the journey he must indeed be, classed among the ungodly. The keg of vinegar they found about 100 miles from the point where it started on its journey, but there seemed to be a fatality about that keg. For not long afterwards it was mistaken for whiskey and stolen. My father was married to my mother Martha J. Lee in 1852 at San Jose. He died at Santa Cruz Aug 17-1888. My mother was born in Arkansas April 15 1834, crossed the plains in 1849, with her parents, Mark Lee and Janey Lee. My parents resided in San Jose from the time of their arrival in California – 49-50 until their death. I was the seventh of eight children of whom one brother and two sisters are living.

Remarks:My grandfather S. Mc, left Council Bluffs in the spring of 1853. Four months later he arrived in California. His [illegible] consisted of two ox teams, house-hold goods, wife and three small children, one of whom Alena was my mother. Later, a baby was born at Pawnee Swamp, Utah, causing a delay of two days at that place. The baby first [illegible] cradle was an iron kettle. The travelers experienced no difficulty on the way, feed for the oxen was good and the indians were not unfriendly as request for food granted and a peep at the white papoose, and the wagon went on its way. Grandfather located at Sileyville, now passed into history, 4 miles from the town town [sic] of Dixon, which came into existence later about the time the railroad came through the county, about 1868. Alena McBride when grown to young woman-hood married Henry Ross in 1866, also a young pioneer, who came from Missouri in 1857 and began life as a pioneer in Vacaville. Both from Christian homes of high ideals, they worked and planned their home, real pioneers, of California. Their home was in Dixon, then known as Dicksonville, named after an old settler, when the railroad came through in 1868.

Remarks: Mrs. Roberts parents were born in Hanover then under the British Crown. Her mother came to California from New York by way of the Panama with friends of her mother and made her home with her relatives, Mr. and Mrs. Adolphus Plate, gunsmith of San Francisco. Her father was a territorial pioneer landing at Santa Barbara Aug. 20, 1850. Mrs. Roberts have written a most wonderful and interesting biography of her parents, which will be found in another part of the History Book.

Remarks:Both parents arrived in California from New York by way of Panama.

Remarks: Father came to California with his sister and brother-in-law Isaac Jones who was a missionary on the ship Powhattan. The missionary and wife both died of the cholera in 1850. Mother arrived on the Nysida. Stewart Captain Fails brought her along with his wife and daughter. Mother was a companion for the daughter. Mother seen her 18th birthday coming around the Horn. Father and mother met in San Francisco and were married in 1854 by Rev Dr. Cheney. 9 children were born and five grew to woman- and manhood, 4 boys and one girl. There are two boys and a girl left. Father and mother’s names were in the cornerstone of the 1st Baptist Church on Washington St. Father was also one of the founders of the first Welsh church in San Francisco. The children were all born at 1310 Kearney St., Telegraph Hill. Parents lived on the same piece of property over forty years, sold out and in later years at 2nd Ave., Richmond, San Francisco. Our parents were always proud of being territorial pioneers. Children all attended Union Grammar School on Union St. between Kearny and Montgomery. I also attended the North Cosmopolitan School, graduated when Kate Kennedy was principal, also attended the Commercial High on Powell near Clay, Isadore Leisensky, principal.

Remarks: My father was the first man that had a water wagon and delivered water to families in San Francisco.

Remarks: Parents came around the Horn. Both passed away in San Jose, Cal.

Remarks: My grand-father was Spanish and came from Barcelona, Spain with Arch-bishop Alemany. First arch bishop of California. He could not speak English and my grand-father came with the Bishop as interpreter. My father came to California way of New Orleans & Panama and my mother by ship & Panama.  arrived in California early ’50 from or ’53.