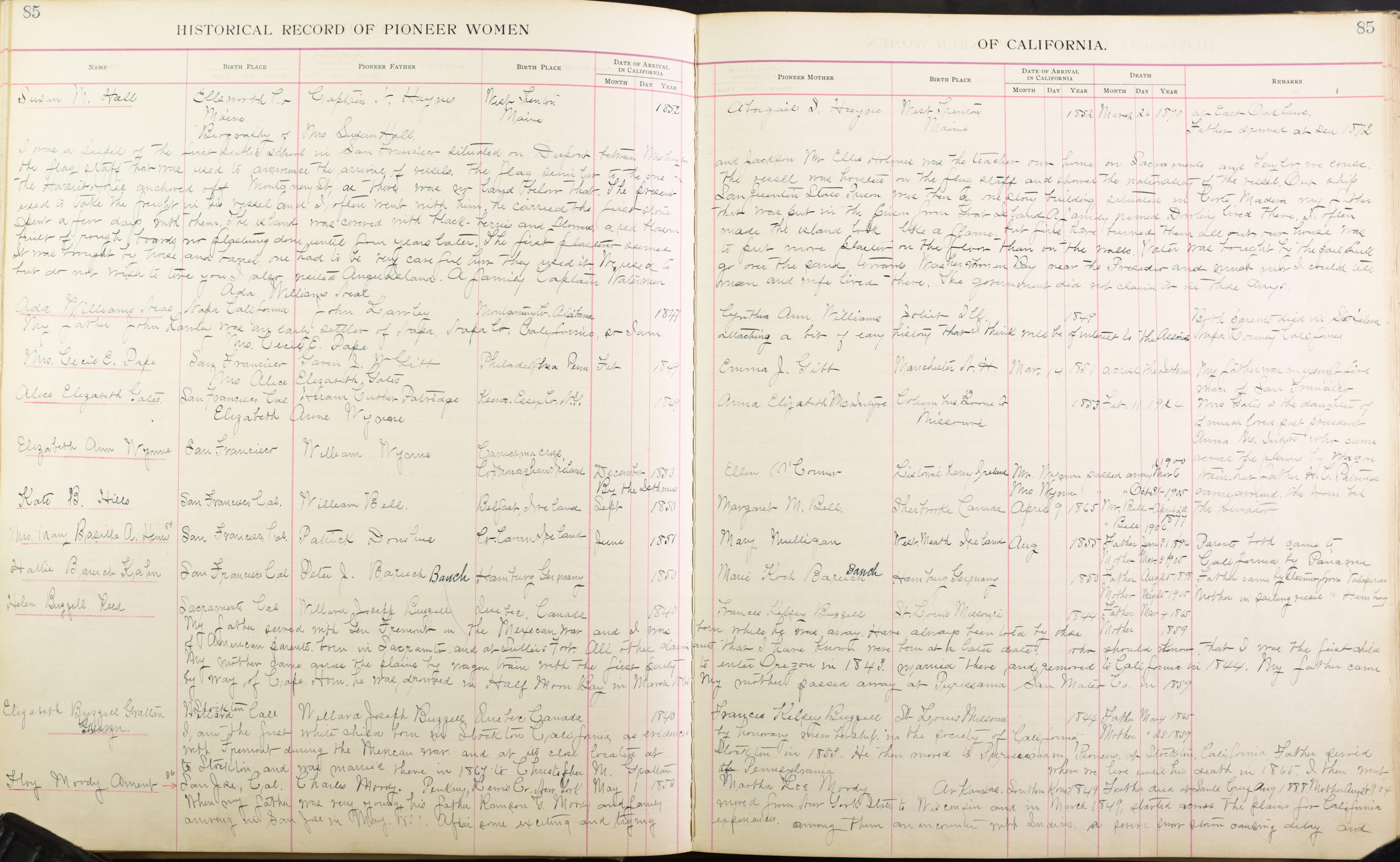 Remarks: Biography of Mrs. Susan Hall. I was a pupil of the first public school in San Francisco situated on Dupont between Washington and Jackson. Mr. Ellis [illegible] was the teacher. Our home on Sacramento and Taylor. We could the flag staff that was used to announce the arrival of vessels. The flag similar to the one on the vessel was hoisted on the flag staff and showed the nationality of the vessel. Our ship the “Harriet Howe” anchored off Montgomery St. at [illegible] more our land below that. The present San Quentin State Prison was then a one story building, situated in Corte Madera. My father used to take the freight in his vessel and I often went with him. He carried the first stone that was put in the prison from [illegible] Island. A family named Dowling lived there. I often spent a few days with them. The island was covered with blackberries and flowers. A red flower made the island look like a flame but fires have burned them all. Our house was built of rough boards, no plastering done until four years later. The first plasterer seemed to put more plaster on the floor than on the walls. Water was brought by the pailfull. It was brought by horse and barrel. One had to be very careful how they used it. We used to go over the [illegible] [illegible]. [illegible] from in Bay near the Presidio and much [illegible] I could tell but do not wish to tire you. I also visited Angel Island. A family Captain Waterman man and wife lived there. The government did not claim it in those days.

My father John Lawley was an early settler of Napa, Napa County, California so I am attaching a bit of [illegible] history that I think will be of interest to the Association.

Remarks: My father was an [illegible] fire man of San Francisco.

Remarks: Mrs. Gates is the daughter of much loved past president Anne E. McIntyre who came across the plains by wagon trail. Her father Mr. H.C. Partridge came around the Horn on the [illegible]

Remarks: Parents both came to California by Panama.

Remarks: Father came by steamer from Valparaiso; Mother in sailing vessel from Hamburg

Remarks: My father served with Gen Fremont in the Mexican War and I was born while he was away. Have always been told by [illegible] of American parents. Born in Sacramento and at Sutter’s Fort. All other claimants that I have known were born at a later date. Who should [illegible] that I was the first child. My mother came across the plains by wagon train with the first party to enter Oregon in 1843. Married there and removed to California in 1844. My father came by way of Cape Horn. He was drowned in Half Moon Bay on March 1865. My mother passed away at [illegible] San Mateo Co. in 1859.

Remarks: I was the first white child born in Stockton California, as evidenced by honorary membership in the Society of California Pioneers of Stockton, California. Father served with Fremont during the Mexican War and at its close located at Stockton in 1853 where we live until his death in 1865. I then moved to Stockton and was married there in 1864 to Christopher M. Grattan of Pennsylvania.

Remarks: When my father was very young, his father [illegible] G. Moody and family moved from New York State to Wisconsin and in March, 1849 started across the plains for California arriving in San Jose in May 1850.After some exciting and trying experiences. Among them an encounter with Indians forever [illegible]