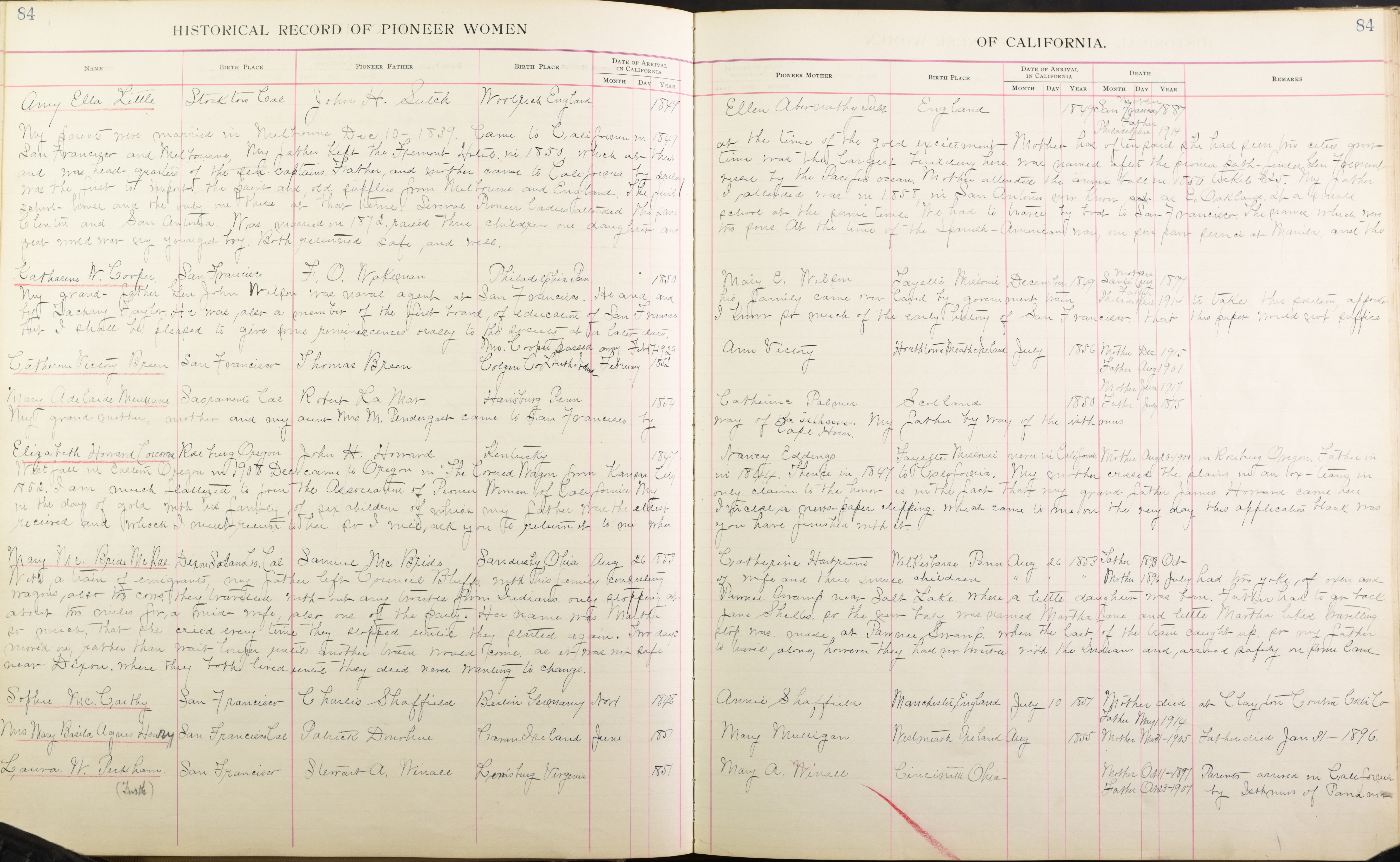 Remarks: My parents were married in Melbourne Dec. 10, 1839. Came to California in 1849 at the time of the gold excitement. Mother has often said she had seen two cities grow – San Francisco and Melbourne. My father left the Fremont Hotel in 1850, which at this time was the largest building here. Was named after the premier path-finder Gen. Fremont and was head-quarters [sic] of the sea captains. Father and mother came to California by sailing vessel by the Pacific Ocean. Mother attended the annex ball in 1850. Tickets $25. My father was the first to import paint and old supplies from Melbourne and England. The first I attended was in 1858 in San Antonio near [illegible] Ave. in E. Oakland. It a female school-house and the only one there at that time. Several pioneer ladies attended the same school at the same time. We had to travel by boat to San Francisco. The [illegible] which was Clinton and San Antonio. Was married in 1872. Raised three children, one daughter and two sons. At the time of the Spanish-American War one son saw service at Manila, and [illegible] [illegible] would [illegible] my youngest boy. Both returned safe and sound.

Remarks: My grand-father Gen, John Wilson was naval agent at San Francisco. He and his family came over land by government train to take this position, approved by Zachary Taylor. He was soon a member of the first board of education of San Francisco. I know so much of the early history of San Francisco that this paper would not suffice.

Remarks: Dad came to Oregon in The Covered Wagon from Kansas City in 1844. Then in 1847 to California. My mother crossed the plains with an ox-team in 1852. I am much flattered to join the Association of Pioneer Women of California. My only claim to the honor is the fact that my grand-father [sic] James Howard came here in the days of gold with his family of six children of which my father was the eldest. I [illegible] a memo-paper clipping which came to me on the very day this application blank was received and which I need return to them so I need ask you to return it to me when you have finished with it.

Remarks: With a train of emigrants, my father left Council Bluff with his family consisting of wife three small children, has his yoke of oxen and wagons, also [illegible] [illegible] they travelled [sic] with-out any trouble from Indians. Only stopping at [illegible] Camp near Salt Lake where a little daughter was born. Father had to go back about ten miles for a mid-wife, also one of the party. Her name was Martha Jane Shelles. So the [illegible] baby was named Martha Jane and little Martha liked travelling [sic] so much that she cried every time they stopped until they started again. Two days stop was made at [illegible] Swamp when the last of the train caught up. So my father moved up rather than wait longer until another train would come, as it was safe to leave alone, however they had no trouble with the Indians and arrived safely on farm land near Dixon where they both lived until they died never wanting to change.

Remarks: Parents arrived in California by Isthmus of Panama