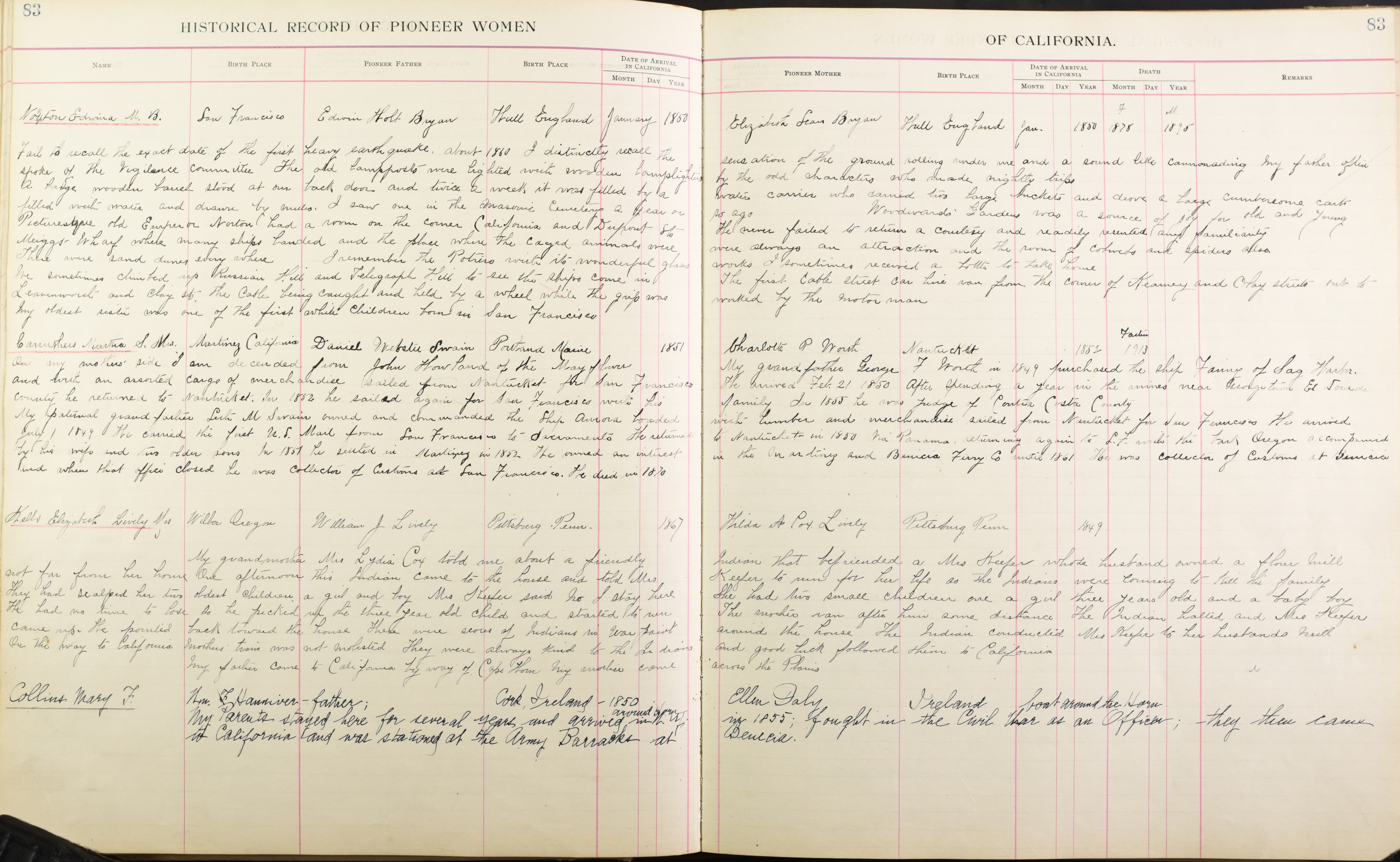 Remarks: Fail to recall the exact date of the first heavy earthquake about 1860. I distinctly recall the sensation of the ground rolling under me and a sound like cannonading. My father often spoke of The Vigilance Committee. The old lampposts were lighted with wooden lamplighters by the odd characters who made nightly trips.

A large wooden barrel stood at our back door and twice a week it was filled by a water carrier who carried two large buckets and drove a large cumbersome cart filled with water and drawn by mules. I saw one in the Masonic Cemetery a year or so ago.

Woodwards’ Gardens was a source of joy for old and young. Picturesque old Emperor Norton had a room on the corner California and Dupont Sts. He never failed to return a courtesy and readily resented any familiarity. Meiggs Wharf, where many ships landed and the place where the caged animals were, always an attraction and the room of cobwebs and spiders also.

There were sand dunes every where. I remember the Potrero with its wonderful glass works. I sometimes received a bottle to take home. We sometimes climbed up Russian Hill and Telegraph Hill to see the ships come in. The first Cable street car line ran from the corner of Kearney and Clay streets out to Leavenworth and Clay Sts. The Cable being caught and held by a wheel while the grip was worked by the motor man. My oldest sister was one of the first white children born in San Francisco.

Remarks: On my mothers’ side I am decended [sic] from John Howland of the Mayflower. My grandfather George F. Worth in 1849 purchased the ship Fanny of Sag Harbor and with an assorted cargo of merchandise sailed from Nantucket for San Francisco. He arrived Feb. 21, 1850. After spending a year in the mines near Georgetown, El Dorado county, he returned to Nantucket. In 1851 he sailed again for San Francisco with his family. In 1855 he was judge of Contra Costa County.

My paternal grandfather Lester M. Swain owned and commanded the ship Aurora, loaded with lumber and merchandise, sailed from Nantucket for San Francisco. He arrived July 1 1849. He carried the first U.S. Mail from San Francisco to Sacramento. He returned to Nantucket in 1850 via Panama, returning again to S. F. with the bark Oregon accompanied by his wife and two older sons in 1851,, he settled in Martinez in 1852. He owned an interest in the Martinez and Benicia Ferry Co until 1861. He was the collector of Customs at Benicia and when that office closed he was collector of Customs at San Francisco. He died in 1870.

Remarks: My grandmother Mrs. Lydia Cox told me about a friendly Indian that befriended a Mrs. Keefer whose husband owned a flour mill not far from her home. One afternoon this Indian came to the house and told Mrs. Keefer to run for her life as the Indians were coming to kill the family. They had scalped her two oldest children, a girl and boy. Mrs. Keefer said no I stay here. She had two small children, one a girl three years old, and a baby boy. He had no time to lose so he picked up the three year old child and started to run. The mother ran after him some distance. The Indian halted and Mrs. Keefer came up. He pointed back toward the house. There were scores of Indians in War paint around the house. The Indian conducted Mrs. Keefer to her husbands mill. On the way to California mothers’ train was not molested. They were always kind to the Indians and good luck followed them to California.

My father came to California by way of Cape Horn. My mother came across the Plains.

Remarks: My parents stayed here for several years and arrived in 1855; fought in the Civil War as an Officer; they then came to California and was stationed at the Army Barracks at Benicia.