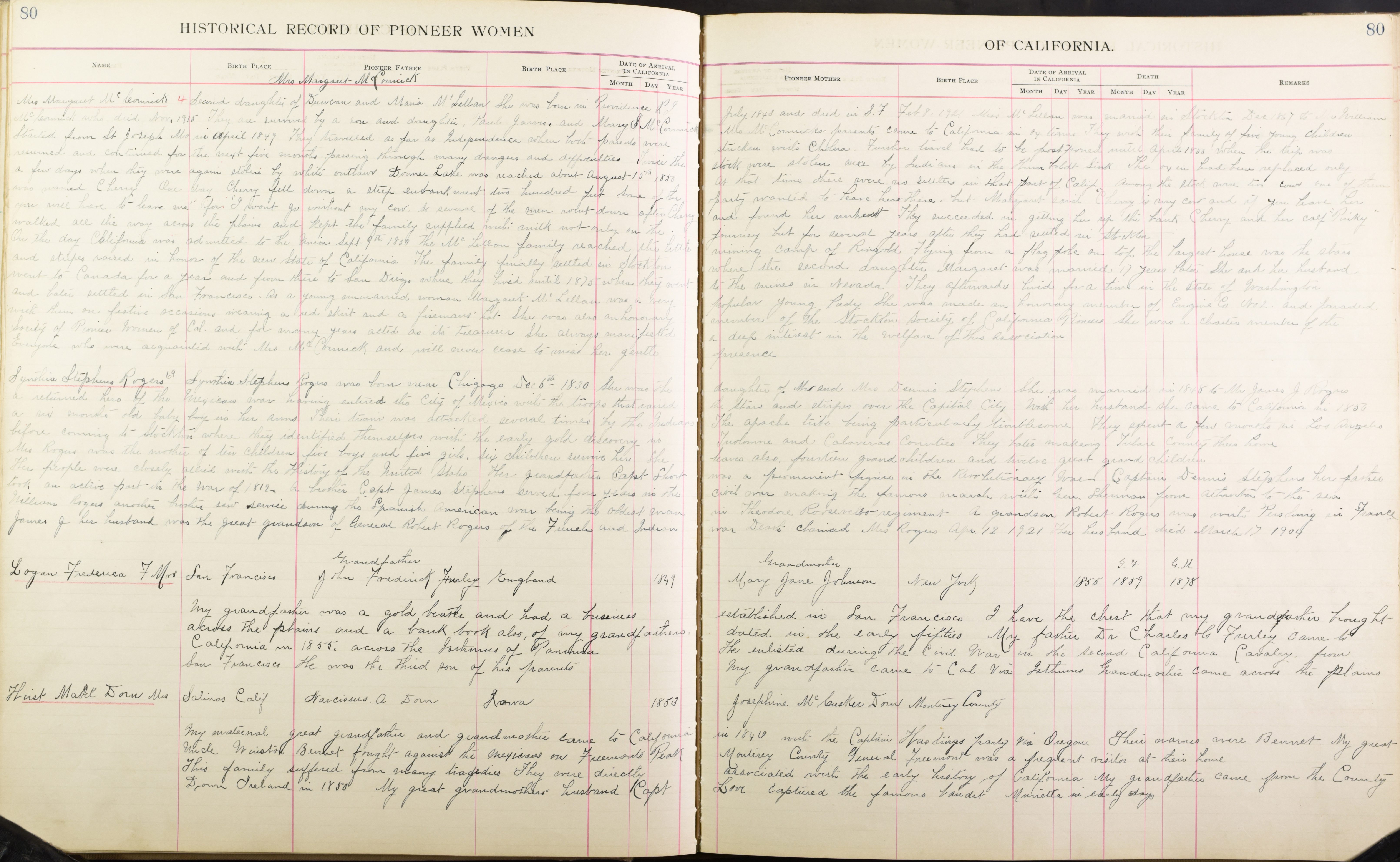 Second daughter of Duncan and Maria McLellan. She was born in Providence, RI July 1848 and died in S.F Feb 8, 1921. Miss McLellan was married in Stockton Dec 1867 to Mr William McCormick who died Nov. 1915. They are survived by a son and daughter, Paul James, and Mary S. McCormick.  Mrs McCormicks parents came to California in ox teams. They with their family of five young children Started from St Joseph Mo in April 1849. They travelled as far as Independence when both parents were stricken with Cholera.  Further travel had to be postponed until April 1850 when the trip was resumed and continued for the next five months passing through many dangers and difficulties. Twice the stock were stolen once by Indians in the Humboldt Sink. The oxen had been replaced only a few days when they were again stolen by white outlaws. Donner Lake was reached about August 15th 1850. At that time there were no settlers in that part of Calif. Among the stock were two cows one of them was named Cherry. One day Cherry fell down a steep embankment two hundred feet. Some of the party wanted to leave her there, but Margaret said Cherry is my cow and if you leave her you will have to leave me for I wont go without my cow.  So several men went down after Cherry and found her unhurt. They succeeded in getting her up the bank  Cherry and her calf “Pinky” walked all the way across the plains and kept the family supplied with milk not only on the journey but for several years after they had settled in Stockton.

On the day California was admitted to the Union Sept 9th 1850 the McLellan family reached the little mining camp of Ringold. Flying from a flag pole on top the largest house was the stars and stripes raised in honor of the new State of California. The family finally settled in Stockton where the second daughter Margaret was married 17 years later. She and her husband went to Canada for a year and from there to San Diego where they lived until 1875 when they went to the mines in Nevada. They afterward lived for a time in the state of Washington and later settled in San Francisco.  As a young unmarried woman Margaret McLellan was a very popular young lady. She was made an honorary member of Engine Co No 2 and paraded with them on festive occasions wearing a red skirt and a firemans’ hat. She was also an honorary member of the Stockton Society of California Pioneers.  She was a charter member of the Society of Pioneer Women of Cal. and for many years acted as its treasurer. She always manifested a deep interest in the welfare of this association. Everyone who were acquainted with Mrs McCormick and will never cease to miss her gentle presence.

Synthia Stephens Rogers was born near Chicago Dec 6th 1830. She was the daughter of Mr and Mrs Dennis Stephens. She married in 1848 to Mr James J. Rogers a returned hero of the Mexican War having entered the City of Mexico with the troops that raised the Stars and stripes over the Capital City. With her husband she came to California in 1850 a six months old baby boy in her arms. Their train was attacked several times by the Indians. The Apache tribe being particularly troublesome  They spent a few months in Los Angeles before coming to Stockton where they identified themselfes [sic] with the early gold discovery in Tuolomne and Calaveras Counties. They later making Tulare County their home. Mrs Rogers was the mother of ten children five boys and five girls, six children survive her. She leaves also fourteen grandchildren and twelve great grandchildren.

Her people were closely allied with the History of the United States. Her grandfather Capt. Short was a prominent figure in the Revolutionary War. Captain Dennis Stephens her father took an active part in the War of 1812.  A brother Capt James Stephens served four years in the civil war making the famous march with Gen. Sherman from Atlanta to the sea. William Rogers another brother saw service during the Spanish American war being the oldest man in Theodore Roosevelts regiment. A grandson Robert Rogers was with Pershing in France. James J. her husband was the great grandson of General Robert Rogers of the French and Indian war. Death claimed Mrs Rogers Apr. 12 1921. Her husband died March 17 1904.

Remarks: My maternal great grandfather and grandmother came to California in 1843 with the Captain Hastings party via Oregon.  Their names were Bennet.  My great Uncle Winston Bennet fought against the Mexicans on Freemonts Peak Monterey County. General Freemont was a frequent visitor at their home. This family suffered from many tragedies. They were directly associated with the early history of California. My grandfather came from the County Down Ireland in 1850. My great grandmothers’ husband Capt. Love captured the famous bandit Murietta in early days.