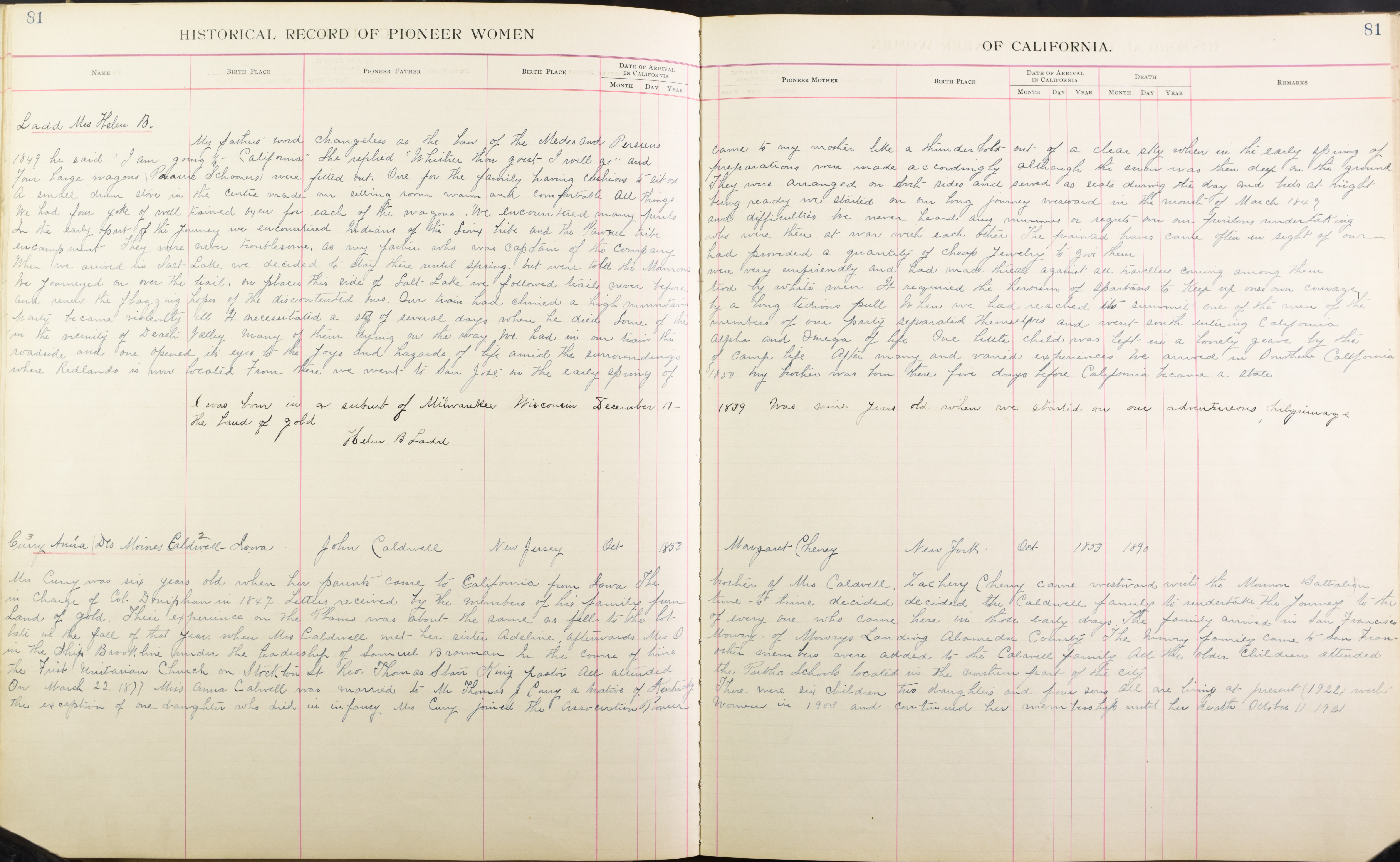 My fathers’ word changeless as the Law of the Medes and Persiens came to my mother like a thunderbolt out of a clear sky when in the early spring of 1849 he said “I am going to California.” She replied “Whither thou goest I will go” and preparations were made accordingly although the snow was then deep on the ground. Four large wagons (Prairie Schooners) were filled out. One for the family having cushions to sit on. They were arranged on both sides and served as seats during the day and beds at night.  A [illegible] stove in the centre made our sitting room warm and comfortable. All things being ready we started on our long journey westward in the month of March 1849. We had four yoke of well trained oxen for each of the wagons. We encountered many perils and difficulties. We never heard any murmurs or regrets on our perilous undertaking. In the early part of the journey we encountered Indians of the Sioux tribe and the Pawnee tribe who were then at war with each other. The painted braves came often in sight of our encampment. They were never troublesome, as my father who was captain of the company had provided a quantity of cheap jewelry to give them.

When we arrived in Salt Lake we decided to stay there until spring. but were told the Mormons were very unfriendly and had made threats against all travellers [sic] coming among them. We journeyed on over the trail, on places this side of Salt Lake we followed trails never before trod by white men. It required the heroism of Spartans to keep up ones own courage and renew the flagging hopes of the discontented ones. Our train had climed [sic] a high mountain by a long tedious pull. When we had reached its summit one of the men of the party became violently ill. It necessitated a stop of several days when he died. Some of the members of our party separated themselves and went south entering California in the vicinity of Death Valley many of them dying on the way. We had in our train the Alpha and Omega of life. One little child was left in a lonely grave by the roadside and one opened its eyes to the joys and hazards of life amid the surroundings of camp life. After many and varied experiences we arrived in  Southern California where Redlands is now located. From there we went to San Jose in the early spring of 1850. my brother was born there five days before California became a state.

I was born in a suburb of Milwaukee Wisconsin December 11 – 1839 Was nine years old when we started on our adventurous pilgrimage the land of gold.

Remarks: Mrs. Curry was six years old when her parents came to California from Iowa. The brother of Mrs Caldwell, Zachary Cheney, came westward with the Mormon Battalion in charge of Col. Doniphan in 1847. Letters received by the members of his family from time to time decided decided the Caldwell family to undertake the journey to the Land of gold. Their experience on the Plains was about the same as fell to the lot of every one who came here in those early days. The family arrived in San Francisco late in the fall of that year. When Mrs Caldwell met her sister Adeline afterwards Mrs O Mowry of Mowrys Landing Alameda County. The Mowry family came to San Fran- in the Ship Brookline under the leadership of Samuel Brannan. In the course of time other members were added to the Caldwell family. All the older children attended the First Unitarian Church on Stockton St Rev. Thomas Starr King pastor. All attended the Public School located in the northern part of the city.

On March 22. 1877, Miss Anna Caldwell was married to Mr Thomas J. Curry a native of Kentucky. There were six children two daughters and four sons.  All are living at present (1922) with the exception of one daughter who died in infancy. Mrs. Curry joined the Association of Pioneer Women in 1903 and continued her membership until her death October 11 1921