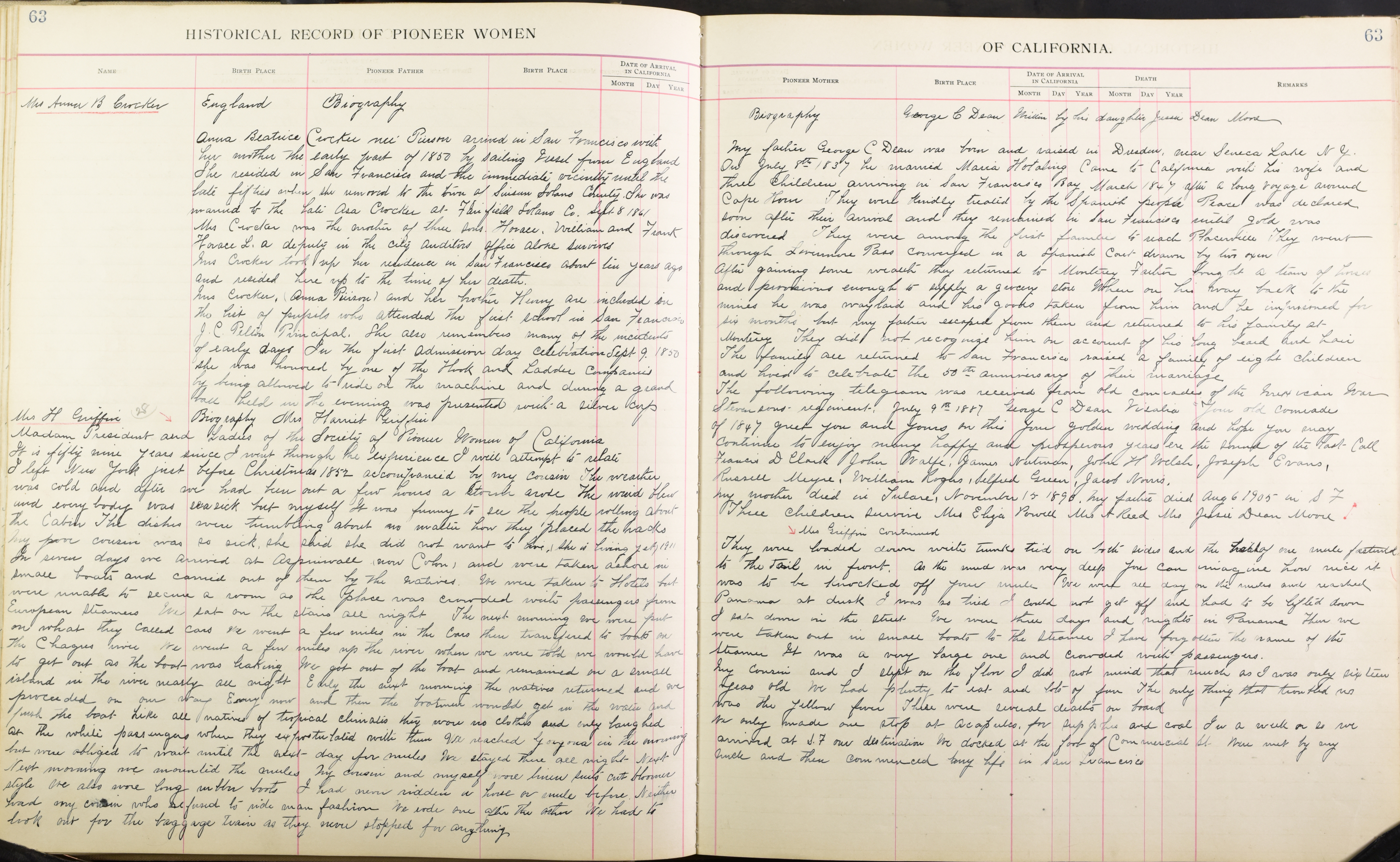 Anna Beatrice Crocker nee Purson arrived in San Francisco with her mother the early part of 1850 by sailing vessel from England. She resided in San Francisco and the immediate vicinity until the late fifties when she moved to the town of Suisun Solano County. She was married to the late Asa Crocker at Fairfield Solano Co. Sept. 8, 1861. Mrs. Crocker was the mother of three sons, Horace, William, and Frank. Horace L. a deputy in the city auditors office alone survives. Mrs. Crocker took up her residence in San Francisco about five years ago and resided here up to the time of her death. Mrs. Crocker (Anna Purson) and her brother Henry are included on the list of people who attended the first school in San Francisco. J.C. Pelton Principal. She also remembers many of the incidents of early days. In the first admission day celebration Sept. 9, 1850 she was honored by one of the Hook and Ladder companies by being allowed to ride on the machine and during a grand hall held in the evening was presented with a silver cap.

Madam President and Ladies of the Society of Pioneer Women of California. It is fifty nine years since I went through the experience I will attempt to relate. I left New York just before Christmas 1852 accompanied by my cousin. The weather was cold and after we had been out a few hours a storm arose. The winds blew and everybody was seasick but myself. It was funny to see the people rolling about the cabin. The dishes were tumbling about no matter how they placed the racks. My poor cousin was so sick, she said she did not want to live. She is living yet, 1911. In seven days we arrived at Aspinwall, now Colon, and were taken ashore in small boats and carried out of therm by natives. We were taken to Hotels but were unable to secure a room as the place was crowded with passengers from European Steamers. We sat on the stairs all night. The next morning we were put on what they called cars. We went a few miles in the cars then transferred to boats on the Chagres river. We went a few miles up the river when we were told we would have to get out as the boat was leaking. We got out of the board and remained on a small island in the river nearly all night. Early the next morning the natives returned and we proceed on our way. Every now and then the boatmen would get in the water and push the boat. Like all natives of tropical climates they wore not clothes and only laughed at the white passengers when they expostulated with them. We reached Gorgona in the morning but were obliged to wait until the next-day for mules. We stayed there all night. Next next morning we mounted the mules. My cousin and myself wore linen suits cut bloomer style. We also wore long rubber boots. I had never ridden a horse or mule before. Neither had my cousin who refused to ride man fashion. We rode one after the other. We had to book out for the baggage train as they never stopped for anything. They were loaded down with trunks tied on both sides and the tail [illegible] of one mule fastened to the tail in front. as the mud was very deep you can imagine how nice it was to be knocked off your mule. We were all day on the mules and reached Panama at dusk. I was so tired I could not get off and had to be lifted down. I sat down in the street. We were three days and nights in Panama. then we were taken out in small boats to the Steamer. I have forgotten the name of the Steamer. It was a very large one and crowded with passengers. My cousin and I slept on the floor. I did not mind that much as I was only sixteen years old. We had plenty to eat and lots of fun. The only thing that troubled us was the yellow fever. There were several deaths on board. We only made our stop at Acapulco for supplies and coal. In a week or so we arrived at S.F. our destination. We docked at the foot of Commercial St. Were met by my uncle and then commenced my life in San Francisco.

My father George C. Dean was born and raised in Dresden, near Seneca Lake N.Y. On July 8th 1837 he married Maria Hotaling. Came to California with his wife and three children, arriving in San Francisco Bay March 1847 after a long voyage around Cape Horn. They were kindly treated by the Spanish people. Peace was declared soon after their arrival and they remained in San Francisco until gold was discovered. They were among the first families to reach Placerville. They went through Livermore Pass [illegible] in a Spanish [illegible] drawn by his Oxen. After gaining some wealth they returned to Monterey. Father [illegible] and provisions enough to supply a grocery store. When on his way back to the mines he was waylaid and his goods taken from him and he [illegible] for six months but my father escaped from them and returned to his family at Monterey. They did not recognize him on account of his long beard and hair. The family all returned to San Francisco, raised a family of eight children and lived to celebrate the 50th anniversary of their marriage. The following telegram was received from old comrades of the Mexican War Stevensons regiment- July 9th, 1887. George C. Dean, Visalia. “Your old comrade of 1847 greet you and yours on this [illegible] golden wedding and hope you may and hope you may continue to enjoy many happy and prosperous years [illegible]. -Francis D. Clark, John Wolfe, James [illegible], John H. Welsh, Joseph Evans, Russell Meyre, William [illegible], [illegible] Green, Jacob Norris. My mother tied in Tulare, November 15, 1890. My father died Aug. 6, 1905 in San Francisco. Three children survive, Mrs. Eliza Powell, Mrs. A Reed, Mrs. Jessie Dean Moore.